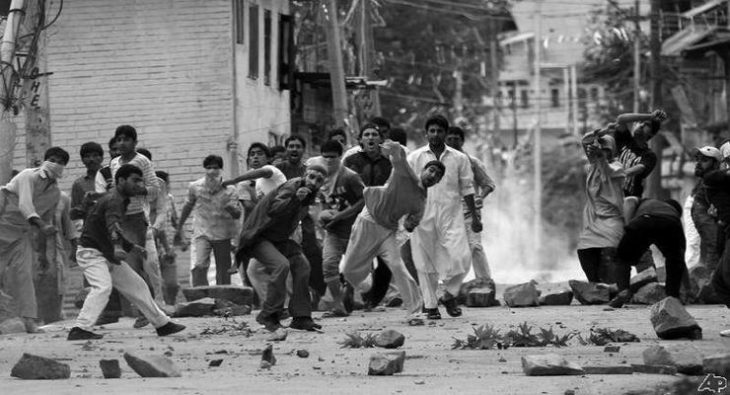 Recently a team of five from the Centre for Dialogue and Reconciliation, a Delhi based corporate and foreign capital funded institute, visited Jammu & Kashmir under the leadership of senior BJP leader and Modi detractor Yashwant Sinha and submitted the report on its observation to the Union Government and also disclosed the same to journalists in the capital New Delhi.

Most of the media houses paid lip service to the findings, while many published selected extracts from the report. The entire report is about starting a dialogue process with the people of Jammu & Kashmir along with the government of Pakistan on the issues pertaining to the erstwhile kingdom that India annexed in 1948.

The report submitted by the team gave useful insights into the affairs of the valley, especially the growing frustration among the common people of Kashmir, who are experiencing a gross violation of human rights in the valley due to the extremist violence unleashed by the Indian armed forces on the civilian population demanding right to self-determination under the UN charter.

Some of the most important findings of the report, as published in the Indian Express on 7th January 2017, are given below:

“Kashmiris believe that there is a “crisis of acknowledgement” of the Kashmir problem with the Indian state. They feel that India refuses to recognize that Kashmir is a political problem and, therefore, requires a political solution. Almost every Kashmiri we met said that there was a need for a one time political settlement and that unless the basic political issue was resolved, death and destruction would continue to visit the Valley with increasing frequency….

The anger in the rural areas is palpably greater than in Srinagar and raw. A persistent sense of discrimination against the Kashmiris pervades the minds of the vocal sections of the population…

There is a near complete lack of faith in anything that the Government of India says or promises because of a history of broken commitments. Even among those who say that they see a future with India, there is anger that India has not done enough to keep the Kashmiris with it…

Kashmiris see the visits of emissaries of GoI and civil society groups as farcical exercises and part of a diversionary tactic to handle disturbances in Kashmir. Because of the record of the Indian State, there is skepticism about even non-governmental initiatives…

People even object to the language used to describe the situation in Kashmir – “unrest” they say is the wrong term to use as Kashmir has never been at rest since 1947, “peace and normalcy” are the most abused words in the state as no one knows what they are meant to signify, and while the government talks of “anger and alienation” of the Kashmiris, those are not the issues that need to be addressed – the problem is political and cries out for a political solution. Or, so the Kashmiris claim repeatedly…

India, many believe, is deliberately pretending to be ignorant of the aspirations of the Kashmiri people. Most Kashmiris claim that their protests are neither ‘sponsored’ by anyone nor are their youngsters being paid to come out in the streets…

There is an increasing lack of fear in the youngsters – or so they claim — in confronting the security forces. Today, they claim, they take death in their stride. The best thing for which we are thankful is that your use of weapons, including pellet guns has killed the fear in us. We now celebrate the martyrdom,” one youngster said…

People believe that the present lull in stone-pelting and street protests will not last for long. They say that stone pelting is the result of not allowing any assembly of people. People ask, “How do Kashmiris voice their feelings, vent their anger or grievances?” As of now, the strike calendar has become fortnightly and complete hartal or closure is limited to only two days in a week. Children are going to school on the days when there is no hartal and private transport is functioning normally most of the time. It is as if, realizing the hardships being faced by the people, the Hurriyat leaders have decided not to enforce the hartal with full vigour.

However, there is a strange apprehension among the Kashmiris that something untoward is going to happen once spring sets in. What happens in the period after April 2017 is expected to be much higher in magnitude and intensity.” (sic)

This observation though honestly reflects the general mood of the people of the valley and goes beyond the stereotypes presented by the mainstream corporate media regarding the situation in Kashmir, but it falls short of acknowledging the core issue of Kashmir that has stirred Kashmiri people since generations – the demand of Azadi.

The situation in Kashmir is turbulent not because that the people of the valley are simply asking the Modi government and the RSS to shed its Hindutva outlook and consider the problem of the valley as not a law and order problem but as a “political problem” rather it’s turbulent because the people want complete freedom and an end to the seven decades old military rule imposed upon them by the government of New Delhi.

Sponsored by the US, the Pakistani regime used the Kashmir issue since ages to consolidate its grip on the independence movement of the Kashmiri people and to divert it from democratic and progressive course to the blind alley of Islamic fundamentalism and tyranny. The experiment of the US-Pakistan-Saudi Arabia nexus implemented in Afghanistan to oust the Soviet occupation and establish a notorious radical fundamentalist puppet government was replicated even in the Kashmir movement and the indigenous movement demanding freedom from a repressive government was hijacked by Pakistan.

The hijacking of the Kashmir issue by Pakistan actually helped the Indian state more than Pakistan as New Delhi used the Pakistani bait as an excuse to carry out the most heinous crimes against humanity in the valley. Over 26 years the Indian armed forces have killed nearly 100,000 people in Kashmir, including thousands of those whose remains were never seen by any family member.

The Indian armed forces killed, maimed, raped, and abused thousands of Kashmiri people over the last 26 years and as the government and the ruling clique of India keeps the armed forces in the sanctum sanctorum of public life, immune from criticism and even legal prosecutions when operating under the notorious AFSPA, there were no visible accountability on part of the Indian government to the people of Kashmir, whom it visibly despise now despite drooling for the land and resources that they own.

In the context of the current discontent, one thing can be claimed despite the committee led by former Union Minister Yashwant Sinha missing it, or shall we say obliterating it for the sake of his allegiance to the Sangh Parivar led by the RSS, the Kashmiri people are keen to see their most cherished dream of freedom materialise and they are now beyond the stage of being cowed using force or extreme violence.

As more and more youth will feel the “belongingness” that the Modi government wants to transmit using the pellet guns and indiscriminate bullet spraying on the protesters, they will lose the fears that hold them back from agitating for their just demand for political freedom from the dominance of a junta rule imposed by New Delhi.

The report by the Yashwant Sinha led team rightly understood the mood of the valley, where the people are preparing for a grand street struggle against the Indian armed forces during the beginning of the springs, which the Modi government will blame on foreign funding and support, without even making a fake attempt to feel the temperament of the people of Kashmir.

Mainstream political parties in Kashmir are mere appendages of New Delhi, devoid of any intention or agenda to take up the cause of the Kashmiri people and therefore, the people treat these parties as only civic amenities provider while living under a tyrannical military rule imposed by New Delhi. There remains no chance that the people will trust these organisations and delegate them the authority to speak on behalf of them.

New Delhi will never go beyond treating the Kashmiri people as colonial people and will unleash the most violent repression on them to liquidate any form of resistance against New Delhi and to dismantle any political force that can attempt to arouse the masses against the military occupation.

As the Indian ruling clique got closer to the Zionist Israeli government over the past two decades, thanks to the neo-liberal economic reign, the repression on the Kashmiri people intensified manifold and new heinous techniques are implemented to curtail Kashmiri freedom struggle.

The spring will awaken a new genre of struggle for emancipation from colonial military rule in the valley and the government in New Delhi will again face the agitating youth on the streets with pebbles in their hands braving against heavily armed fourth largest military power on earth. More blood will be spilled and more graves will be dug, but as the history of Kashmir shows, there will be no calmness in the valley once called paradise on earth because freedom will be still eluding the people of the valley.

It’s high time that New Delhi, for the sake of democracy and for the sake of human lives, to start taking the demand for independence in a mature and more sensible way. It’s time for the government that drums its credibility as a large democracy to work out a democratic solution out of the rigidity of jingoistic fervour with which the government is working these days.