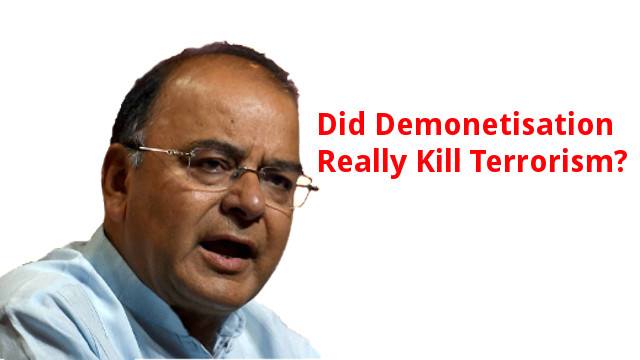 There is a proverb in India that a thief’s voice is louder than that of the cop. Arun Jaitley is proving it correct by saying that the demonetisation exercise of the Modi government has sharply reduced terrorism in India. Following the historic behavioural pattern of RSS cadres, the finance minister, who is also a lawyer who fought on behalf of big corporate houses and owns more than ₹100 crore worth of assets, placed his argument sans any supportive data and evidence. Arun Jaitley’s claim that 5,000 to 10,000 (a large variation) stone throwers used to pelt stones at the Indian forces in Kashmir, which has reduced considerably in the last 8-10 months, is again a blatant lie, like many others, told by Arun Jaitley and his colleagues. The stone pelted by the Kashmiri people targeting the Indian paramilitary and military forces in the valley, a sign of their defiance against what they call Indian occupation of Kashmir and their collective hatred against the violent atrocities committed by the Indian forces, is often portrayed and equated with terrorism by the Hindutva camp and its toady media organs. Though the people of Kashmir have taken up this form of protest after extreme frustration gripped them following the repeated violation of human rights by the Indian forces, the Hindutva camp represented by the RSS and the BJP always call it an act of terrorism. Arun Jaitley must remember that the winter in Kashmir brings a lull in this popular form of struggle and since the beginning of April this year, the stone pelting increased and even the delegation led by BJP leader Yashwant Sinha warned about unfolding of a larger struggle during its visit to the valley in the mid of this year. The intensity of stone pelting even made the Hindutva camp’s favourite army officer, Liton Gogoi to tie a Kashmiri man in front of his vehicle to use him as a human shield against stone pelters. Mr Jaitley was the defence minister of India when this incident happened and his government threw its hat behind the culprit officer and absolved him of all crimes committed against humanity. Mr Jaitley must have been suffering from early syndromes of political dementia to forget this so soon.

Since 8 November 2016, India didn’t experience any end of militancy or terrorism in the country, but the violence intensified. Few days after the new currency notes were released, they were found with two militants killed by the Indian forces in Bandipora. The Nagrota attack too followed the demonetisation drive and the militants kept operating in the Kashmir valley without starving due to the currency notes of ₹500 and ₹1,000 being made invalid. In the month of April 2017, the Maoists launched a large-scale strike against the CRPF in Chhattisgarh’s Sukma region. In the month of July, the militants in Kashmir allegedly gunned down eight pilgrims from Gujarat visiting the Amarnath shrine. In August militant attack on a police facility in South Kashmir’s Pulwama district and killed eight personnel. In September and October, to Arun Jaitley’s surprise, militant attacks became more regular in Kashmir valley and often drew mass support due to their targeting of military installations that are seen as symbols of oppression in Kashmir. The stone pelting became vigorous as Kashmiri women came down to the streets, shouldering their male counterparts and even exceeding them in pelting stones against the armed forces of the Indian state by defying the fear of death, the very fear at the support of which India rules the valley and subjugates its people.

Mr Jaitley and his knicker-clad RSS buddies don’t consider the lynch mob of cow vigilante Gau Rakshaks, who are on the payroll of the RSS and enjoys the support of the Indian state, as terrorists, unlike the majority of the Indian people. They don’t consider the communal hate mongers like Yogi Adityanath and Sakshi Maharaj threat to India’s national security, unlike the people of the country; Jaitley also doesn’t consider the RSS as a terror fountainhead in India despite the former Home Secretary and his now cabinet colleague, R.K. Singh once saying, in the capacity of a senior bureaucrat that the Hindutva group is associated with terrorist activities in India. Therefore, the intensification of their terror activities, mob lynching of Muslim men all over the country, the inciting of riots in Odisha’s Bhadrak, West Bengal’s Baduria and Basirhat region, the sudden hype in arms and ammunition dealings by the Hindutva camp, BJP leader Rupa Ganguly’s claim that she knows well how to fire an AK 47 rifle, which is either used by the armed forces of the state or by militants, etc. are not called terrorism according to the dictionary used by Arun Jaitley and his colleagues and leader Narendra Modi. However, as these terror-mongers of the Hindutva camp are terrorists and are aiming to dismantle the secular and democratic fabric of India guaranteed to the people by the Constitution, therefore, the increase in their violent activities also points towards the zero effect of demonetisation on terrorism.

Arun Jaitley and people like him can use rhetoric for a while to fool the people and divert their attention from the real and burning issues, especially the destruction towards which the Indian economy is rushing under the captaincy of Narendra Modi and how the economic catastrophe is unfolding before our eyes, but in the long run their tactics won’t help them in getting over with the immense anti-incumbency wave that is rising throughout the length and breadth of the country and which is threatening to overlap the communal hatred spread by the RSS and its Hindutva associates to use the inherent hatred imbibed within the Hindus against the Muslims and Christians to push through their own agendas safely and out of public scrutiny. The Hindutva agenda is coming under fire from the erstwhile strong bases of the saffron camp like Gujarat, where the internal survey of the RSS is pointing towards a very bad state of affairs for the BJP. Terrorism and communal violence are the two major weapons for the RSS-led Hindutva camp and the Modi government to save themselves from an imminent collapse. Arun Jaitley’s moaning over the success of demonetisation in reducing terrorism-related activities won’t sound any more credible to the very people who have found the rich getting richer and the poor starving since the demonetisation drive was initiated by the Modi government to help the US government’s USAID organisation to experiment the forceful push of digital transactions in a big economy like India.

All these years, since they rode to power on an anti-incumbency wave against the Manmohan Singh and Sonia Gandhi-led UPA II rule, the Modi regime and its sycophants kept lying about the forthcoming better days to the poor and mixed their economic dopes with the opium of bigotry and communalism to override any kind of objections against their single-tracked economic policy that aimed at bringing better days for Ambani, Adani, Tata and their clan along with the big corporations owned by foreign monopoly and finance capital, while at the same time driving the poor and the downtrodden towards further destitution and pauperisation. This cannot be a timeless process that the BJP and the RSS can think that they will be able to repeat forever using communal rhetoric and propaganda through WhatsApp or social media. The economy is about bread and lentils on which the people of the country survive and when it’s going to vanish from their plates they won’t live any longer under the illusion of the Ram Temple or a Hindu kingdom like the middle-class and elite upper-caste Hindus. They will demand employment, income, food and items of daily necessities that are becoming expensive every day and as the economy worsens these people will join hands together to bring an end to the fascist Hindutva menace that has proved itself of being a hazard for the country. Until that hour comes, Arun Jaitley can continue to peddle few more choicest lies to befool the people.