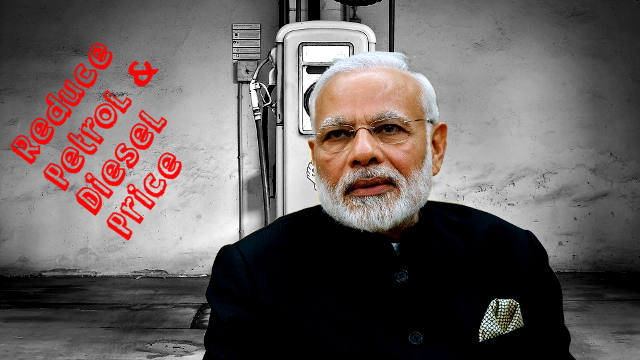 The incessant spike in oil prices is putting the already-sick Indian economy into a more perilous state, while the Modi government is incessantly resorting to rhetoric and advertisements to prove itself in the field of good governance, which it promised once but doesn’t exist in reality.

The Modi government has taken no concrete decision to subsidise the rising fuel prices by imposing a price-control mechanism that the Atal Bihari Vajpayee-led NDA government had dismantled to please the WTO, World Bank and the IMF.

Petroleum Minister Dharmendra Pradhan, who happens to be the only minister who looks into a sector that’s now handed-over to the corporate sector to exploit super-profit, remains non-committal about bringing petroleum products under the GST regime and doing away with the multiple taxes levied on petrol and diesel by the central government and various state governments.

Under such precarious condition, the oil companies are cutting the price of petroleum slowly in the units of paise and in the last four days, till the writing of this report, the oil prices have been reduced by 22 paise, while they surged in multiple of Rupees during the past few weeks since the Karnataka assembly election.

On 2nd June, the government-owned big oil corporations reduced the price of petrol and diesel by a meagre nine paise. Now petrol costs ₹78.20 in Delhi and ₹80.84 in Kolkata, while diesel costs ₹69.11 in Delhi and ₹71.66 in Kolkata respectively. The international oil prices are high and the government’s corpus fund, which the Modi government claimed it created by not passing on the benefits of lower fuel price during 2014-16, is not seen anywhere to be used to ease the burden on the common people.

Whenever there is a discussion over why the Modi government or the state governments are not reducing or lifting the heavy taxes and duties on the essential fuels, the right-wing economists will call it suicidal as such heavy taxes are purportedly going to fund the “welfare projects” that the Union government or the state governments fund. Their logic is that there cannot be any reduction in the taxes and excise duty on fuel price, as a ₹1.00 reduction by the Modi government can amount to a ₹13,000 crore deficit for the exchequer.

The same economists, however, remain mute over the condition of India’s fiscal health when the Modi government could use more than ₹4,000 crore on advertising, using money from public exchequer. The Modi government has more flexibility in reducing the prices of the fuels by modifying the taxes, which amount to 50 per cent of the price of petrol or diesel in India. When the BJP is promising loan waiver to farmers in different states that are election-bound, it’s actually paving the way to increase the input cost in farming, as diesel price is now touching the ceiling.

Enslaved to the foreign monopoly and finance capital, the Modi government will not let a price control mechanism oversee fuel prices in the Indian market as it will cause immense losses to the big oil corporations and the Reliance group of Mukesh Ambani.

Though many Asian countries are now introducing a price-control mechanism with an effective subsidy plan to bring down the fuel prices and ease inflation in view of the rising price of crude oil in the international market, the Indian ruling classes and their economic influencers are continuously making the politically important urban middle-class believe that allowing oligopoly pricing of fuel is the only way to economic development, leaving them with a high price of fuel, which is even causing severe obstacles for the private sector.

When imported from the OPEC, petrol and diesel prices are managed by the oligopoly pricing mechanism of the large petroleum corporations in India, whose stakes are owned by foreign bank and monopoly capital-owned Indian comprador entities, apart from the Central Government that owns the majority stake. These companies operate with an aim to extract the maximum profit from the people, while the Central Government and all state governments earn huge revenue by imposing multiple taxes and cess on petrol and diesel.

The Indian GDP growth of the FY 2017-18 was 6.74 per cent, which is the lowest during Narendra Modi’s rule. The RBI and the Modi government has decided to target the GDP growth rate of 7.4 per cent in the FY 2018-19, however, the rising fuel prices will not let the GDP reach there if it continues to the second quarter (Q2) of the FY as well.

RBI Governor Urjit Patel looks disarrayed as amid the rising fuel prices, Indian Rupees has become the worst performing currency in South Asia. The falling rate of the Indian Rupees and thereby, the mounting bills of fuel import is going to deepen the economic crisis, as the Balance of Payment will increase significantly, leaving the government with a huge fiscal deficit. There is no policy decision on this by the Modi government until now, even when the inflation rate is going to be over 5 per cent in the entire FY 2018-19, an indication that the people will be imposed with heavier burdens by the Modi regime, while it intensifies the election campaign for 2019 by using money from public exchequer.

This economic crisis in which India is now quagmired, can’t be only blamed on the Modi government, as the opposition is doing. The Modi government is, of course, a culprit of usurping the corpus fund it said it had created by not passing the benefits of lower fuel price to the people when the government was formed. However, to solely blame the Modi government for the high oil prices will be an injustice that we should avoid. The formation of a Congress-led opposition government will not end the tyranny of rising fuel prices.

India needs an economic policy that is against the neo-liberal economic prescription preferred by the Troika of IMF-World Bank and WTO. Fuel prices cannot be left in the mercy of the market forces as it will continue to impose a severe burden on the common people, affect agriculture and intensify inflation. To control the economy a planned approach is very much required, which can bring the oil prices under a control mechanism.

Also, a socialistic approach and economic planning will help the economy grow and uplift the poor to a better economic position. No parliamentary coalition will take the risk of angering the IMF-World Bank-WTO troika by advocating for an anti-neo-liberal and pro-socialistic economy. Therefore, the responsibility of taking such a revolutionary step is on the people, because only they can form the real alternative and bring the country out of the gorge of doom and despair.