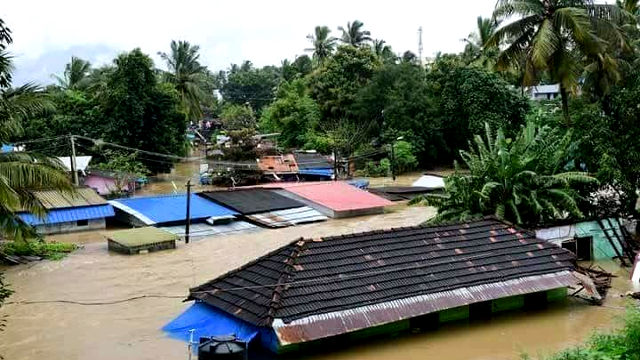 The Kerala flood has been one of the most devastating disasters to ravage the state since 1924 and one of the most tragic incidents of natural calamity after the 2015 Chennai flood to hit South India. Addressing a press conference on 17 August evening at the capital Thiruvananthapuram, Kerala Chief Minister Pinarayi Vijayan gave information on the rescue operation and the relief work. He said that 82,442 people had been rescued on Friday with the help of the Navy and the fisherfolks’ boats. Chalakudy is one of the worst affected areas of the state at the moment and Idukki and Chengannur in Alappuzha hills are totally cut-off from the state.

According to official figures, 71,591 people had been rescued from Aluva district, 5,550 from Chalakudy, 3,060 from Chengannur, 2,000 from Kuttanad, and 741 from Thiruvalla and Aranmula. Mr Vijayan also confirmed that 324 people had lost their lives in the floods since the onset of South West Monsoon on 29 May 2018. Over half of them- 164 across the 14 districts- had died in the deluge in the last few days. As per government estimation, more than 10,000 km of roads are damaged due to the flood, more than 200,000 houses are affected and the total loss is estimated at ₹190 billion, which can be more when real estimations can be done after the water level recedes.

The situation of Kerala flood is quite grave until now, as a red alert of heavy rainfall is still issued by the Indian Meteorological Department and thus, uncertainty still looms large on the fate of the people stuck in the flood-hit areas of the state. According to various estimates, more than 314,000 people are living in various relief camps now and nearly one million people are stranded on the terraces throughout affected areas of the state. Relief and rescue work is repeatedly suffering setbacks due to high water levels in various parts of the state, the incessant rainfall and due to a total breakdown of the communication system. It’s now quite problematic for people to send the relief materials or reach out Kerala through land or air as the roads are totally submerged in most places, while the international airport has stopped its operation until 26 August.

Throughout Kerala the common people are panicked, they are disarrayed and grief-stricken due to the catastrophe that ruined their lives in the last few weeks. The poor people, especially the poor and landless peasantry, the marginal farmers are the worst sufferers because not only they lost their shanty houses to the rage of nature, they also lost their livelihood for the whole season as the state will suffer one of the worst agricultural setbacks in the last 100 years. The loss of crops, livestock, farming equipment and the loss of consumer goods will create the worst scenario in the state for months to come and it will be unwise to believe that governments at the state and the central level can control a possible scenario of anarchy, prevent blackmarketing of food and essential products, and rapid corruption in rehabilitation of the flood-affected people, especially the poor and the downtrodden.

Kerala flood is a signal of a rapidly changing environment caused by the unbridled aggression of big corporations against nature and its system. The fury of nature is felt in different parts of the country in a short span of time and worldwide it has become a phenomenon with which the people are facing real hardships to reckon with. Monsoon in Kerala always brings heavy rainfall, however, the reckless growth of urban real estate industry that’s expanding rapidly affecting the drainage and sewage system, river banks and backwater channels of Kerala and a spurt in quarry mining also contributed to the build-up of factors that made the Kerala flood 2018 the worst of all.

It’s time that the governments at the central and state level take concrete steps to control the aggression against nature and environment by the greedy corporations to prevent the recurrence of such large-scale disasters that affect the lives of millions. However, as the big corporations, owned by foreign finance and monopoly capital, hold the strings of the government and control politicians, it’s unlikely that the people will experience a completely revolutionary approach to contain climate change, which will prolong their sufferings. Kerala flood is a warning, a trailer of a larger catastrophe in the making; if we don’t take preemptive actions and prepare the people to face and thwart such fury of nature, we will not be able to sustain life in the future.