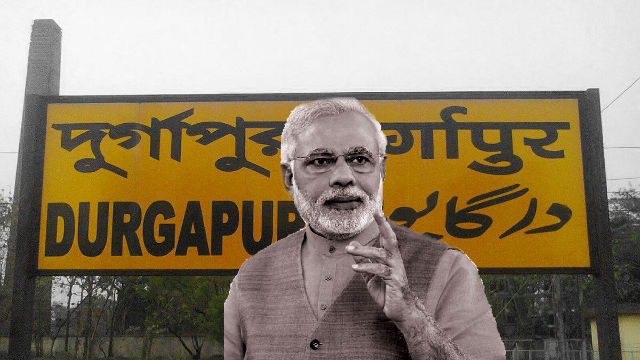 At West Bengal‘s Thakurnagar and Durgapur, Prime Minister Narendra Modi lambasted the state’s chief minister and ruling Trinamool Congress (TMC) supremo Mamata Banerjee. Modi accused her and the TMC-led government of abetting crime, corruption and extortion in the state, depriving it of its due development.

The prime minister’s visible anger against BJP’s old ally Mamata stemmed out due to two reasons. Firstly, Mamata outmanoeuvred him and the BJP by bringing together a host of opposition parties in Kolkata to build a large anti-BJP front in the election. From the 19th January Unite India Rally, Mamata slyly expressed her desire for the top post for the country with the support of different political parties that are also aspirant for the booty of power. For an insecure Modi, it was indeed a shocker to see such a rally of the united opposition, as the unification of opposition votes will surely spell the doom for the BJP if a free and fair election is held without manipulation of mandates.

Secondly, the TMC’s massive rally in Kolkata’s Brigade Parade Ground saw the mobilisation of more than 400,000 supporters and people, which threw an uneven competition for the BJP. The West Bengal BJP, mired in scams, cases of sexual abuse and crimes, understood well that it won’t be able to bring a crowd even closer to 200,000 in comparison to Mamata’s 400,000 in a large ground like Brigade Parade Ground of Kolkata.

Hence, Modi’s public rally at the Brigade Parade Ground was immediately called off and two smaller rallies were organised in Thakurnagar and Durgapur to compensate for the lack of crowd. The supporters who came to these rallies were brought from different parts of the state by luring them with money, food and other benefits.

As different factions of the state BJP and district BJPs have been fighting with each other, their competition to be “crowd pullers” ended up in bringing more people than what the ground in Thakurnagar could accommodate, resulting into total chaos that forced the prime minister to flee. Earlier too, a stage crash during another rally of Modi created an upheaval over poor crowd management and indiscipline in the BJP rallies.

Thakurnagar was carefully chosen as a location for Modi’s rally  by the West Bengal BJP due to the presence of a large number of Matuas, a Bengali Dalit community that migrated from East Bengal during partition.

The Matua Mahasangha, headed by Binapani Devi, popularly known as Boro’ma, is the leading socio-religious organisation of the community that follows the legendary social reformers like Hari Chand Thakur and  Guru Chand Thakur. Its headquarter is located in Thakurnagar and is also a bastion of the TMC.

Since 2014, when the BJP upped its ante against the ruling TMC to wrest control of West Bengal, weaning the Matua community to the saffron camp became a challenge for the party. Ever since the notorious Dilip Ghosh-led new state leadership took charge, poaching Matua leaders from the ruling TMC’s camp became a regular affair. During 2015-16, the BJP even managed to split the family of Boro’ma, forcing the ailing matriarch to vociferously oppose the saffron camp.

Modi’s visit to the 99-year-old by using one of her family member as a mediator was tepidly responded, which forced the prime minister to vanish quickly from the Matua Mahasangha headquarters. Incidentally, the eldest daughter-in-law of Binapani Devi — Mamata Thakur — is an MP of the TMC.

Now that the BJP has the infamous Citizenship (Amendment) Bill, 2016, in its favour, it’s trying to lure those sections of Matua people who migrated from Bangladesh and didn’t get Indian citizenship until now.

As the community suffers extreme religious persecution at the hands of Salafist fanatics repeatedly in Bangladesh, Islamophobia and bigotry are prevalent among a large number of Matuas. The BJP is capitalising this inherent Islamophobia present within the community for its political gain, and it’s trying to build a strong base in North and South 24 Parganas of the state.

The massive communal violence in Baduria of North 24 Parganas in 2017 was orchestrated by the BJP with the support of many Hindu refugees and Namasudra (Bengali Dalit) community members. The RSS and the Bajrang Dal are working among these migrant Hindu refugees and the BJP is promising them instant citizenship if voted to power.

Durgapur, the other city where Modi’s second rally was held, is an ailing industrial town and is located in the West Bardhaman district where a large number of migrant Hindi-speaking population had migrated over years. It’s close to another crucial industrial town, Asansol, whose MP is Union Minister Babul Supriyo, a hardcore Hindutva fanatic.

In 2018, the BJP, along with the RSS, VHP and Bajrang Dal, instigated communal violence targeting the Muslim community in Asansol and Raniganj. By spreading communal clashes through armed rallies celebrating Ram Navami, a non-Bengali and quintessential North Indian festival, the BJP tried to polarise the majority Hindu community.

As the entire West Bardhaman region is famous for militant trade union movements and has a presence of a large working-class population, it’s little tough for the BJP to breach the barrier that had been built by a series of united struggles in the factories and coal mines of the region.

However, by utilising the common anger against the TMC-led government, its corruption and extortion regime, by spreading communal venom among the politically backward sections of the working class and the upper-caste non-Bengali Hindus, especially traders, private money-lenders, smugglers and mafia, the BJP has built a substantial presence in the region. It’s a prominent opposition force now and has improved its score vis-a-vis pre-2014 period.

Modi’s visit to these two places and his angry jibes at Mamata exhibit three important factors for the Lok Sabha poll analysts.

One, Modi and his party are scared of the realisation of opposition unity in the country and therefore, using all their rhetoric, propaganda and demeaning, they would try to oppose the TMC, though the latter remains a secret ally of the RSS in spreading communal disturbance in West Bengal. The BJP will utilise everything in its disposal, including CBI, muscle and money power, and the centre’s power over the state to garner votes in West Bengal and stop Mamata’s dream caravan. This may result in large-scale partisan violence between the BJP and the TMC in the saffron party’s pockets of influence in West Bengal.

Two, the Citizenship (Amendment) Bill, 2016, will play a crucial role in the 2019 Lok Sabha election in West Bengal and in the entire northeast. While the indigenous people of the seven sister states of the northeast will continue to vehemently oppose this bill that aims to give citizenship to non-Muslim migrants by violating the Constitution’s Article 14 and 21, the BJP will use it to woo the Bengali Hindus of Assam, Tripura and West Bengal. It’s expecting to win huge support of Bengali Hindus, especially the Namasudra community, through this bill.

Three, the BJP will foment communal trouble by instigating violence through the non-Bengali, upper-caste Hindu support base in West Bardhaman and other areas. A large number of migrant Hindi-speaking voters will be polarised by the BJP by using Islamophobia. The BJP will intensify communally-toxic campaigns in these areas and assert its power by attacking Muslim areas. This will deteriorate communal amity, or the fragments of it, that exist in the mixed-community areas of West Bengal. The BJP will take help from the TMC secretly in doing this and also a host of Salafist fanatics are hand-in-glove with the saffron outfit in this heinous agenda.

If the BJP is successful in implementing its nefarious scheme, then it will spell doom for the future of West Bengal and the Bengali community at large. The economy of the state is already in tatters due to massive corruption, feudal autocracy and unbridled exploitation of West Bengal’s labour and resources by non-Bengali corporate capital. The rise of the BJP as the dominant political force — as it has overtaken the ailing parliamentary left and the Congress — will certainly become a catastrophe for the state’s political, economic and social future.

The BJP’s organising of prime minister’s rallies in Durgapur and Thakurnagar are though good signs, as the party fails to gain the immense support or even paid crowd in West Bengal, the choice of the locations and the aggressive posture of the Sangh Parivar in the state are worrisome and if we fail to pick the signal and take corrective actions to resist the menace from now onwards, then it will metamorphose into the nemesis for the Bengali community in India.