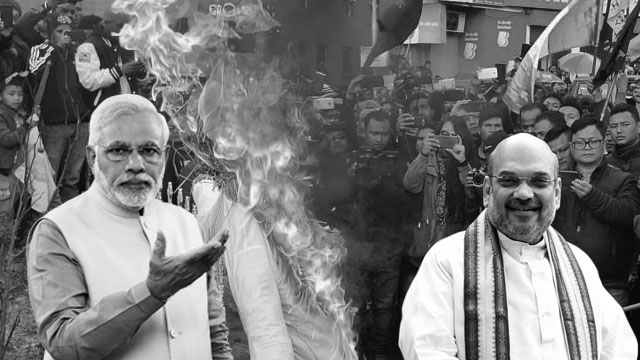 Before the flames of the Delhi pogrom, which took place from 23 to 27 February 2020, were extinguished, ethnic violence began in Meghalaya, where the Khasi Students’ Union (KSU) members opposing the contentious citizenship matrix of Prime Minister Narendra Modi, clashed with the non-tribal settlers, especially the Bengali Hindus. The coverage of the Meghalaya riots between Khasis and non-tribals has been relegated to the backburner in the mainstream press of Delhi and Mumbai, as they became busy vilifying Muslims who fought for their lives against rumbustious Hindutva fascist mobs or to show how the internet will suffer if Modi quits social media at the age of 70.

Meghalaya riots between Khasis and non-tribals was not given any prime focus, and a total press blackout throughout India about the violence and bloodshed showed how northeastern India and its seven sisterly states are considered mere colonies by the Indian rulers and their press, despite chanting hymns of national integration — the alias of Hindi and Hindufication of all diverse people.

On Friday, 28 February 2020, the KSU activists organised a rally against the Citizenship (Amendment) Act, 2019 (CAA), at Ichamati area of East Khasi Hills district. During this anti-CAA meeting, local non-tribals were frightened due to xenophobic speeches and soon after the meeting ended, a clash between the Khasis and non-tribals killed Lurshai Hynniewta, a KSU activist. In the resultant clashes many others, including policemen, were injured in the Ichamati Shella area of East Khasi Hills. Though the government imposed a ban on mobile internet until 8am of Saturday, 29 February, it was extended to six districts —  East Jaintia Hills, West Jaintia Hills, East Khasi Hills, Ri Bhoi, West Khasi Hills and South West Khasi hills — after more violence erupted.

It’s not just the Meghalaya riots between Khasis and non-tribals, the mainstream press has severely censored most of the northeastern news on anti-CAA protests to avoid causing ignominy for the ruling Bharatiya Janata Party (BJP) of Modi, which claims it enjoys an unchallenged hegemony in the region. India’s northeast is always kept shrouded in layers, to bury the real situation and the people’s anger against New Delhi’s rule.

The BJP and the National People’s Party (NPP) are allies and ruling Meghalaya together. Chief Minister Conrad Sangma continues to cheat the tribal people, like his father PA Sangma, by allying with the BJP and by being a part of the latter’s Hindutva fascist agenda. The BJP’s parental body Rashtriya Swayamsevak Sangh (RSS) wants to change the demography of Meghalaya through the imposition of Hindi language and settlement of non-tribals to make it a Hindu-majority state from a Christian-majority one.

The CAA is seen with suspicion by the tribals as they consider it an attempt to change the demography of Meghalaya like neighbouring Assam or Tripura. While the tribals, including the Khasi tribe, vehemently oppose the CAA, Sangma shamelessly supported the BJP. He compromised by allowing the CAA to roll out without safeguards for the tribals of Meghalaya. Sangma only demanded the British colonial-era Inner Line Permit (ILP) to keep outsiders away but the BJP didn’t commit anything.

The Meghalaya riots between the Khasis and non-tribals began because of the delay of the Sangma-led NPP to force the BJP in getting the ILP implemented. Though the CAA promises to exempt the Sixth Schedule areas of the Indian Constitution, it’s not quite assuring for the tribal people. They have been participating in movements against the CAA throughout the state since January and many groups threatened “direct action” stir to implement the ILP on their own, irrespective of Delhi’s decision.

Due to the sheer apathy shown by the Modi regime and the NPP towards their anger and demands, the tribal people of Meghalaya are vehemently protesting against the citizenship matrix. The reluctance of the government to act and protect tribal interests has promoted xenophobic actions and resulted in the Meghalaya riots between the Khasis and non-tribals. This fratricide will eventually help the BJP and the RSS to polarise the non-tribals under its banner and use them to attack Christian tribals. For their own interests, the poor tribals and the non-tribals must be shown who is their real enemy. Once they will identify their real enemy, which is Hindutva fascism, led by the RSS and promoted by the Modi regime, they will certainly devote their energy and resources to fight the menace and defeat it. No amount of press censorship will be able to douse their indomitable spirit then.