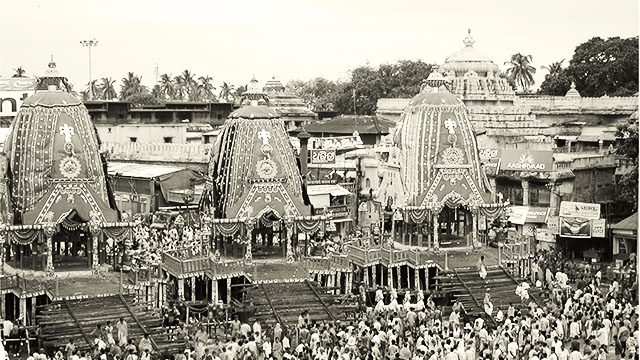 While large-scale public gatherings in India are restricted due to the COVID-19 pandemic, the ruling Bharatiya Janata Party (BJP) of Prime Minister Narendra Modi has repeatedly shown that all rules can be flexed, modified or obliterated to suit the purpose of majoritarianism. No institution, including the Supreme Court, can stop the BJP or the Modi regime from implementing their wit. This was proved, once more, in the Supreme Court’s revised decision to allow the iconic Rath Yatra (chariot procession) –– pronounced Rath Jatra in Odia –– of Hindu deity Lord Jagannath in Odisha’s coastal town Puri, after it denied permission to the same earlier.

After the Supreme Court earlier denied permission to organise the Rath Yatra in Puri due to COVID-19 pandemic, saying that “Lord Jagannath will not forgive us if we allow Rath Yatra this year”, the upper-caste Hindus of Odisha opposed the decision and there was visible unrest at grassroots. The BJP, along with its parental body Rashtriya Swayamsevak Sangh (RSS), launched a vicious campaign to stoke public sentiments and force Odisha Chief Minister Naveen Patnaik to succumb to majoritarian muscle-flexing. They succeeded in doing so.

Fearing a majoritarian backlash, as there can be no Rath Yatra for 12 years if it’s not organised this year amid the pandemic, Patnaik did a volte-face in the court over the issue of crowd management. While earlier, when a non-government organisation backed by the state government filed public interest litigation (PIL) seeking curb on the Rath Yatra, the Odisha government claimed it has no resources to prevent millions of devotees hitting the streets during the ritual, the stand changed by 180-degrees later.

Soon after the review petition seeking a reversal of the apex court’s previous judgement on the PIL was taken up by Chief Justice of India SA Bobde, the Odisha government claimed it can manage the crowd and only allow those associated with the famous Puri temple of the deity to participate in the event, maintaining social distancing norms. Solicitor General of India Tushar Mehta argued that there will be no Rath Yatra for 12 years in case the procession isn’t organised on June 23rd. The Supreme Court allowed the temple trust to decide on the issue, while the Odisha government imposed a curfew and allowed a few thousand people to take part in the ritual.

When Amit Shah, Modi’s right-hand, tweeted that the Supreme Court judgement allowing the Rath Yatra to be organised with certain guidelines as a victory of Modi’s policies and Patnaik tweeted “Jai Jagannath” (hail Jagannath), it was clear what their motive was. Indeed secularism is a matter of the past.

It’s not a secret anymore that the Supreme Court takes up the matter of Hindu religion on a priority basis vis-à-vis issues concerning the fate of Kashmiris, the students who suffered police brutalities in Delhi, the promulgation of a discriminatory citizenship matrix, the plight of migrant workers, the plight of workers losing their jobs due to the lockdown, etc. The decision of the Supreme Court to revise its earlier stand within a week to allow the Rath Yatra to proceed, at a time when Odisha has scaled-down testing by 80% and the number of cases is spiking, and Shah crediting Modi for this shows the victory of the RSS in making religion a principal mover and shaker factor in Indian politics.

Everyone didn’t forget how the Indian mainstream press vilified the Muslim pilgrims stuck at Nizamuddin Markaz seminary of the Tablighi Jamaat sect. The entire Muslim community was targeted and blamed for spreading COVID-19 in India and the government did this propaganda officially. The Islamophobia spread over Tablighi Jamaat incident further ostracised the Muslims in the RSS-BJP-designed Modified India.

The Muslims were blamed for spreading COVID-19 as per a “Jihad” plan. The community was boycotted by the majority community under the influence of Hindutva fascist propaganda, and it had to face economic hardships and social ostracization as a result. In parts of West Bengal and Haryana, it resulted in violence against the community. It’s no wonder the BJP gained immensely from this propaganda against the community. Now, as the Rath Yatra nears its reverse stage –– a ritual of taking the three chariots back to the original temple –– the ominous silence of the critics of Tablighi Jamaat on this issue exposes their hypocrisy and political bankruptcy.