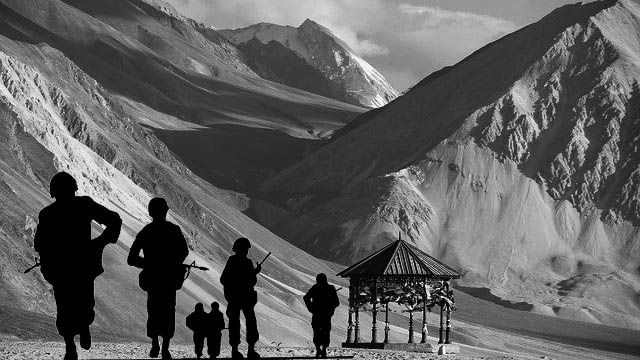 As India’s economic crisis is worsening and the unemployment crisis grows acute, Prime Minister Narendra Modi‘s Bharatiya Janata Party (BJP) is playing the jingoism drum to draw the country’s attention towards the China border, where the tension between the two nuclear power neighbours is simmering since April, when India unabashedly started accusing China of spreading COVID-19 toeing the line set by Donald Trump’s white-supremacist fascist regime. India-China tension has caught the attention of the world, as it has the potential to flare up conflagration that can be lethal for South Asia and the world.

At present, the situation has worsened vis-à-vis June, when 20 Indian Army soldiers were killed in a fistfight with the Chinese People’s Liberation Army (PLA) soldiers. Despite repeated discussions since then between the top brass of the Indian Army and the PLA, no breakthrough is reached to establish peace. This seems to be a deliberate attempt to keep the situation tensed and to pave the way for a longer conflict that will aid Trump in his re-election and Modi in quelling the domestic discontent rising due to the unprecedented economic crisis.

At present, Indian Defence Minister Rajnath Singh, a confidante to Modi, has met the Chinese Defence Minister, General Wei Fenghe, in Moscow, during the Shanghai Cooperation Organisation’s (SCO) defence ministers’ meet. This was the first time that the top political leadership of the two Asian powers met after the deadly clash between the Indian Army and PLA troops in June.  India’s External Affairs Minister Subrahmanyam Jaishankar also confirmed that he will meet his Chinese counterpart Wang Yi in SCO Foreign Ministers’ meet on Thursday, September 10th 2020.

Though such talks may look promising now, as there is a dire need to deescalate tension, the American domination on India’s foreign policy and military affairs won’t let peace have a chance. US Secretary of States, Mike Pompeo, an important figure in Trump’s fascist cabal, is incessantly pushing New Delhi to wage a war with China, which will turn Indian people into cannon fodder.

Though initially, New Delhi showed some maturity by following restrain once the tensions escalated in May and June, but Modi and the BJP won’t dare to ignore the US diktat and, eventually will start a war against China. Modi can’t afford to ignore the jingoistic Sinophobic war cry amplified by the press and the opposition parties.

Pompeo’s pressure on the Modi regime, the BJP’s inability to contain the public disenchantment, Pentagon’s emphasis on stirring a war-like situation in South Asia through the infamous “The Quadrilateral Security Dialogue” or “the Quad” nexus—a military axis formed against China— in which India is a crucial stakeholder, contributed largely to the Modi regime’s renewed attempt to heighten tension at the border areas with China. Anticipating a precarious situation in the electoral battlefield, the BJP is keen to use the politics of battlefield to sweep the forthcoming Bihar Assembly election, followed by assembly elections in Assam, Kerala, Tamil Nadu and West Bengal next year.

The American establishment and deep state are collectively working on an anti-China war-plan to stop Beijing cavalcade to lead the world economy in the post-pandemic era. The COVID-19 crisis in the US has exposed its vulnerability and Trump’s much-hyped “trade war” with China didn’t yield any economic breakthrough. The utmost crisis of global finance and monopoly capital, which has been ravaging the world economy since 2008-09, has reached its peak, and capitalism can only blame COVID-19 to shield itself. However, mass unrest in the US and people’s resentment against the neo-liberal economic agenda all over the world can only be suppressed by a war hysteria in which the US can bring all its lackeys together.

For India, the economic crisis was aggravated by the anti-people decisions like demonetisation, levying of Goods and Services Tax, privatising public assets, cutting down welfare expenditure, etc, and a total lacklustre attitude regarding increasing public spending by the government to generate employment, etc. The lockdown helped Modi to place the blame on COVID-19 and cover-up the fact that unemployment in India reached a 45-year high in the financial year 2018-19 and it’s shooting up incessantly. Now that the first-quarter GDP growth has fallen to -23.9%, rather than focusing on creating employment opportunities, the Modi regime is selling whatever is owned by the government.

For the time being, the Modi regime and the BJP are able to contain the people’s outburst using communal polarisation, Islamophobia and by using the fear of COVID-19 infection to keep the masses from hitting the streets. The mainstream opposition, whose major entities are hand-in-gloves with the BJP in running the neo-liberal economic juggernaut, will also use the pandemic as an excuse to desist their supporters from hitting the streets to fight against the Modi regime’s onslaught. But this won’t continue for long. The BJP knows it, Modi knows it and his coterie is also aware of that. Thus, the Modi regime needs a war with China, armed with the support of other Quad members. It will bolster Modi’s “Hindu nationalist” image and titillate the politically crucial upper-caste Hindu elites and middle-class, whose political views dominate India’s political narrative.

A war with China is a possibility right now and it will be a massive setback for all democratic and progressive forces fighting against the obnoxious agenda of the BJP. Sheer jingoism and Sinophobic hysteria will occupy the political landscape and movements for the rights of the poor will suffer. Thus, it’s for the sake of preserving the people’s movements, for the sake of fighting and defeating Hindutva fascism, that the progressive and democratic forces, the genuine anti-fascist forces must build up mass awareness campaigns to politically educate the people about the perils of forthcoming war with China and why peace, not war, must be the demand of the people. If only such a movement can be started and turn epidemically viral, a war can be prevented, and lives of people can be saved by smashing the conspiracies hatched by the US imperialism.