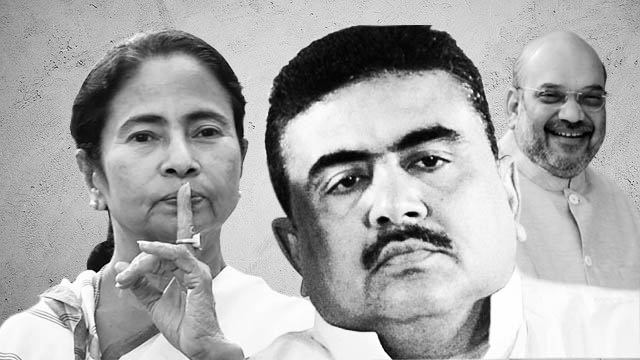 Union Home Minister Amit Shah is infamous for his horse-trading skills (read engineering defections), apart from being accused of physically eliminating rivals or jailing them under false charges, and he is doing it well in West Bengal, the state that the Bharatiya Janata Party (BJP) wants to seize. Shah’s exemplary horse-trading performance is once more exhibited in Medinipur, where honchos from the state’s ruling Trinamool Congress (TMC), like former minister Suvendu Adhikari, the parliamentary left and the ailing Congress party joined the BJP. This defection of Adhikari and others to the BJP has fuelled its hubris manifold in West Bengal.

Son of TMC’s top leader Shishir Adhikari, Suvendu Adhikari was born with a silver spoon and his rise within the TMC, up to him holding multiple offices and roles, was due to the dynastic politics. Now, even after being a leader without a mass base due to his identity, Adhikari claimed he got no “respect” in the TMC. He slammed Chief Minister Mamata Bandopadhyay for the TMC’s corruption. Then a question arises, why he took 20 years to switch? Was this disrespect a new development within the Party?

Adhikari complained against the same criminals, extortionists and scammers, with whom he shared power comfortably all these years. Under his family’s reign, the TMC’s terror wiped out the entire opposition from East Medinipur and West Medinipur districts. The entire extortion racket in the district couldn’t have survived without his involvement.

Adhikari & Sons never allowed any other political entities to survive in their turf, except the BJP with which they have shared a cordial relationship. Suvendu Adhikari’s joining the BJP won’t clean up the optics of him accepting cash on camera, which the Narada sting operations exposed and helped the BJP to charge him of corruption. It’s alleged that Suvendu Adhikari had been a cadre of the BJP’s parental body Rashtriya Swayamsevak Sangh (RSS) during his youth. This helped him connect well with the BJP. Old love is never lost.

At the rally to celebrate the defection of Adhikari and others to the BJP, Shah, driven by sheer hubris, declared that the saffron camp will engineer more defections from the TMC, leaving Bandopadhyay and her nephew-cum-heir apparent Abhishek Bandopadhyay the only people to represent the organisation. He didn’t reveal how the very politicians whom the BJP accuses of scams, extortions, crimes, etc, will be turned into holy saints by his organisation.

Rather than revealing the secret of whitewashing criminals, Shah asked for five years from the people of West Bengal. Citing that the people of West Bengal gave the Congress party 30 years, the communists “27 years” (should be 34) and the TMC ten years, he said the BJP will only take five years to build a “Sonar Bangla” (Golden Bengal). Now, this is actually scary! It means, the BJP will ruin West Bengal and its people’s lives faster than any of these political forces. It means, by 2026, the state will be in ruins!

In six years, the BJP, under Prime Minister Narendra Modi and Shah, has taken the country’s economy to the nadir. It has sold off all remnant public sector enterprises; it has unapologetically given land, water, labour and mineral resources to big foreign corporations for unbridled plundering and exploitation. From defence, railways, transport, telecom, manufacturing, etc, to healthcare, education, agriculture, everything is privatised to appease the greed of Modi’s big corporate donors.

Unemployment has risen to record levels due to the international crisis of monopoly-finance capital, which has been aggravated by Modi’s pro-corporate decisions like the demonetisation exercise in 2016, the Goods and Services Tax implementation in 2017 and the deadly lockdown imposed in March 2020, which shattered the leftover hopes of the small and medium scale industries as well as the unorganised sectors.

Now, under the guise of economic recovery, the Modi regime is promoting the cause of big corporates and pushing the reform programmes planned by the World Bank, International Monetary Fund (IMF) and the World Trade Organization (WTO). The recent labour reforms, privatisation of all strategic sectors, allowing big foreign capital to dominate the country’s retail sector, especially groceries, and the adoption of the anti-farmer agriculture reform measures prescribed by the WTO prove whose interests the Modi regime and the BJP are serving.

While Shah ate his usual lunch at a farmer’s house in Medinipur, as part of his routine poverty tourism in West Bengal, nearly a million farmers are opposing Modi’s anti-farmer policies at Delhi’s border, on whom Shah’s police have been unleashing brutal atrocities. In the days to come, the farmers are going to intensify their struggle, causing far more ignominies for Modi and Shah, but in West Bengal, the Union home minister is showing his love for the farmers. Why didn’t he go for lunch with farmers at Delhi’s Singhu border?

The defection of Adhikari and others to the BJP has provided the latter with “local faces” it needs very badly. In West Bengal, due to lack of local leaders, the Hindi-speaking and Gujarati RSS leaders have managed the BJP from the backstage. It had no popular face to be projected as its leader in the state. Now the defection of Adhikari and others to the BJP will help it project “local faces” against the TMC. The latter, devoid of any stalwart except Bandopadhyay, will be facing a tough challenge in the 2021 West Bengal Assembly election. The TMC’s crisis is visible in its inability to prevent the erosion in its ranks, despite knowing Shah’s motives since the 2019 Lok Sabha elections.

Even after the defection of Adhikari and others to the BJP, the TMC could meekly respond by sending one of its mid-level leader Kalyan Bandopadhyay to meet the press. The allegations against the TMC couldn’t be countered and there was no strong rebuttals or exhibition of counter-strategy to withhold the collapsing castle. This lacklustre attitude by the TMC and its reliance on cliché mongering prove that the Party won’t survive the 2021 West Bengal Assembly election at all.

In the time to come, the defection of Adhikari and others to the BJP will starkly remind the people of how hollow the entities like the TMC, Congress party, the CPI, CPI(M) and other parliamentary parties are before the burgeoning and rumbustious BJP. It’s futile to think that the BJP can be defeated in the 2021 West Bengal Assembly elections. Rather, it’s the people’s movements that have the potential to uproot the Hindutva fascist menace from West Bengal’s soil.

The recent upheaval over citizenship rights denied to the Matua community has fanned discontent among the community that has been supporting the BJP so far. MP Shantanu Thakur has been under pressure from the community, while the BJP has been wooing him to neutralise his moves. The anger over the hollow Citizenship (Amendment) Act, 2019, and the National Register of Indian Citizens (NRC) can damage the BJP’s prospect in West Bengal and end the RSS’s attempt to divide the people.

While the mainstream press is superfluous with news of the defection of Adhikari and others to the BJP, the fact that’s overlooked by many is Shah’s change of itinerary during his recent West Bengal tour. While the original plan had Matua areas of North 24 Parganas, fearing a backlash and unfavourable optics, the BJP changed the itinerary and took him to Medinipur. This shows the weak linkage in the BJP’s shackles and the anti-fascist forces, to defeat the BJP, must hammer on this issue, the very conspiracy of Modi and Shah to disenfranchise the people of West Bengal after gaining their votes.

Despite his pride over the defection of Adhikari and others to the BJP, Shah and his puppets can’t survive in West Bengal if a united approach is taken by all anti-fascist forces against the NRC exercise and the demand for unconditional citizenship is popularised. The more the tribal people, the refugees, the Matuas, Namasudras—ostracised Bengali-speaking Dalits—and the religious minorities can be united against the NRC exercise, the more the BJP can be pushed back in West Bengal. If this is not done, then it won’t take many efforts for the BJP to sweep the state and then carry out the NRC swiftly to disenfranchise millions of people.