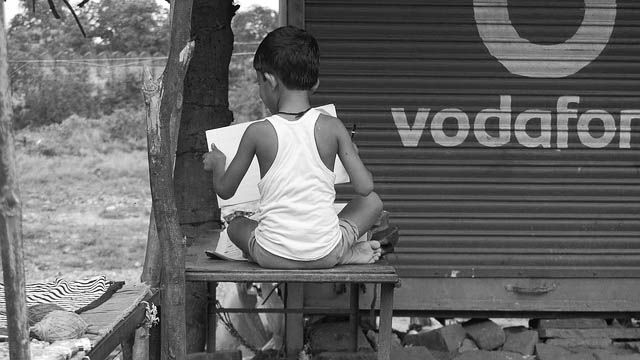 The COVID-19 pandemic has largely disrupted the education system, affecting nearly 1.6bn learners in more than 200 countries. In 2020, schools, institutions and other learning spaces were closed which impacted more than 94% of the world’s student population. The worst affected are indeed developing nations who were struggling to raise their literacy rates over the years.

Fearing the loss of the academic year, which would affect the future of students in 2020, educational institutions implemented alternative educational systems and assessment strategies. The pandemic smoothened the alternative pedagogy based on the internet. Many educationalists see it as an opportunity to pave the way for introducing digital learning.

India did not stand behind when students, offices and other institutes resorted to online work from home culture. Even the urban middle-class population saw it as a blessing in disguise, yet the effects were felt immediately. The worst-affected were the manual labourers, farmers and agriculture labourers, street vendors, shopkeepers, etc, whose physical presence is indispensable for earning a living. The same is the case with the education system.

The primary and secondary schools in India have been closed for more than 500 days; nearly 17 months. During this period only a few privileged students were able to study regularly out of school and in their homes. After schools announced online classes, demand for broadband internet connections, laptops, tabs and smartphones soared, so that both parents and children can carry out their work and study smoothly.

The research reports of various organisations have different findings, which are not positive. The shutting down of schools and the decision of shifting traditional classrooms to digital platforms not only increased learning inequality among children but has also pushed a large number of children out of school due to the digital divide.

Other than learning, the absence of schooling will have a long-lasting effect on the health and nutrition of children. According to the report “Locked out’- Emergency Report on School Education’—a survey conducted in 15 states and union territories, on August 15th 2021— pandemic has resulted in a catastrophe for the education system. The survey was conducted on 1,400 unprivileged households with school-going children to find out the consequences of prolonged school closure from 2020 to 2021.

Most of the students struggled to adjust to the newly created environment and needed a lot of parental supervision and assistance as compared to physical school learning. The study revealed that in rural areas only 8% of sample students are attending online classes regularly, 37% are not studying at all, and about half are unable to read more than a few words. There is also anxiety among parents to send their children to school as soon as possible.

Even in urban households’ parents feel that their child’s learning and reading habits have been affected badly. Many children gave up and are spending time milling around their villages. Thus, the children are deprived of not only the right to learn but also the safe environment and curricular activities at school.

Are the children studying?

So, the much-hyped online education model has failed miserably in educating students; the proportion of school children who have been able to study online, regularly, is only 24% in urban areas and 8% in rural areas, resulting in a large number of school dropouts or rendering students incapable of studying.

There can be several reasons, eg, lack of availability of smartphones in rural areas, interrupted or slow internet connectivity and lack of money in case the parents lost their jobs, which makes survival even more difficult and education a luxury. In most households, smartphones are either used by the adults or are shared between the siblings, if there is more than one child, which also is a reason for irregularity in attending the online classes.

In urban areas, only 31% and in rural areas only 15% have regular access to their smartphones. Moreover, only 9% of all school-going children have their own smartphones. Even after having access to smartphones some children of lower-primary classes lack understanding of online studying or find it difficult to concentrate.

Even the parents of school-going children feel dissatisfied with their child’s online material, feeling overburdened and having fewer offline study options. Among the worst hits are states like Assam, Bihar, Jharkhand and Uttar Pradesh, where nothing has been done to help offline studies. Whereas, in states like Karnataka, Maharashtra, Punjab and Rajasthan, some efforts like worksheets, homework or instructing teachers to visit parents from time to time for advice are deployed. However, the main mode of offline study remained the traditional private tuitions and studying at home with the help of family members. In most cases, where the child was studying with any of the family members, he/she studied irregularly.

The TV-based education proved less effective with only 1% of urban children and 8% of rural children achilleate the TV programmes as a regular or even occasional mode of study. The only effective option left for parents remains the support from the school system, which also remained out of touch. Although private schools were the first to take a call for online teaching methods and did make efforts to teach, send homework for children and conducting online exams for children, most government schools didn’t take such initiatives due to lack of infrastructure.

Many teachers have been out of touch with their students, except for the symbolic presence on online platforms and interactions, and while forwarding online materials, YouTube links or by connecting with parents on WhatsApp messenger from time to time. The majority of the students have not met their teachers even once other than during online classes

But behind all these efforts the main purpose seemed to meet reporting requirements of teachers in the school, justifying the fees from parents rather than helping a child. Private schools tried to survive by switching from offline mode to online teaching methods but charged the same fees to the parents. Poor parents or parents who lost their jobs or livelihoods were rendered on the edge either by discontinuing their children from attending private schools or switching to government schools.

Another major concern that has arisen in the children in urban areas is their increased phone addiction, idleness, lack of exercise, social isolation, lack of discipline and aggressive or violent behaviour. While as in rural areas and lower strata, some children have become labourers, many girls in the age group of 10-14 years are doing some household work, unpaid work in fields with their families, which are affecting their studies.

Reopening of the schools is a major step, to revive the education system, but the threat of COVID -19 is still looming with only 7% of the total population being full-vaccinated. The solution lies in the free vaccine for all age groups, including the school children, to make their mobility safe, which will facilitate the reopening of schools fully. Until then, what we need is to focus on alternative education methods, making education inclusive and universal, application-based studying and a well-defined and nationalised assessment of the education system. So that India remains well-prepared for any future contingency.