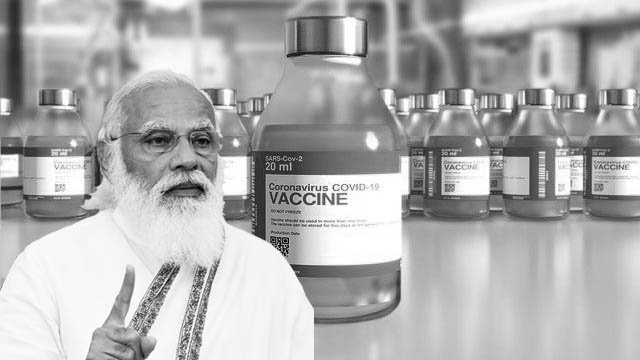 As a steep rise in COVID-19 cases has pulverised the public healthcare system in India, Prime Minister Narendra Modi is utilising the opportunity to help big foreign pharma giants and their Indian comprador lackeys to profiteer. The Modi regime has decided that anyone above the age of 18 will get COVID-19 vaccination and this decision has enthralled his hardcore followers from the urban middle-class and elite sections, who have been hyper-paranoid about the flu for the last year. At the same time, this decision raises many uncomfortable questions, which, when juxtaposed along with the other equations in play, point towards a larger conspiracy most won’t acknowledge.

The Hindu reported that the Indian Council of Medical Research (ICMR) has found that there is no qualitative difference between the first wave (September to November 2020) of the COVID-19 cases and the second wave (March-April 2021) that’s ravaging the country now. The Hindu quoted ICMR’s director-general, Dr Balram Bhargava stating that a “Marginally higher” proportion of patients younger than 20 years were present in the second wave (5.8%) compared to the first wave (4.2%). While the patients in the age group of 20-40 years were 25.5% in the first wave, in the second wave there are 23.7% of such patients.

The Hindu’s report has shown that while 6,642 patients were analysed in the first wave, only 1,405 are analysed now. This sample size difference can be attributed to the lower values for the second term, but then too, the doctors, including Dr VK Paul, who chairs the empowered group on vaccination and COVID management, asserted that the second wave is not qualitatively different in terms of mortality and infection, except for a marginal variance for those in the early 20s.

If this isn’t so mortal and the death rate is still clocked at only 1.18% as per the government’s data, then what’s the source of gory visuals of large-scale funerals in Indian cities? There are claims that India is under-reporting its total number of deaths from the COVID-19 pandemic. Though it’s hard to ascertain the cause of death, as most deaths took place due to comorbidities, the allegation is a serious one.

Modi’s Bharatiya Janata Party (BJP) governments in Gujarat, Madhya Pradesh and Uttar Pradesh are accused of suppressing the total number of deaths due to COVID-19. Even Aam Aadmi Party (AAP)-ruled Delhi is accused of under-reporting COVID-19 deaths. If this is considered true and even if the death rate remains suppressed, there are a few untold facts, which the corporate media and susceptible social media users are obliterating and, thereby, fuelling a hysteria.

Firstly, one must remember that a COVID-19 victim’s corpse can’t be taken for the last rites at any location but the one fixed by the government according to the hospital’s location where the victim had died. The designated crematoriums and graveyards cater to a set of hospitals in each region only. This has increased the load on the respective crematoriums and graveyards, as they have to handle more bodies than their regular loads.

Secondly, there are regular deaths in a city, which take place irrespective of a pandemic and such corpses are also taken for last rites, albeit without any protocols. The increasing loads of corpses at a few selected locations is creating chaos and helping the government and the media to present optics that can fuel fear. This is what the corporate media has been doing and one can easily verify it by checking out that all of them are visiting only the handful of COVID-19-designated crematoriums and graveyards, for example, Central Delhi’s Muslim graveyard and Nigam Bodh Ghat are frequently visited by the media houses but not the others.

If we investigate India’s total death rate for years, then we will be able to gauge that the death rate didn’t increase significantly with the outbreak of the pandemic, around which a lot of hysteria is internationally generated. A total of 6,950,607 deaths happened in India in 2018. According to a Hindustan Times report, nearly 86% of deaths were registered in 2018, and the real number will be somewhere around eight million. The recorded death rate of India in 2018 was 7.23 as per the World Bank’s data.

At the same time, if we analyse the limited data sources on India’s death rate in 2020 when the COVID-19 pandemic hit India, then we will see no steep rise in mortality. In this paper, the Government of Kerala claimed that the mortality rate fell in the state during 2020, amid the COVID-19 pandemic. But Mumbai claimed a 22% jump in annual deaths, but no breakup was provided on the number of deaths due to COVID-19 and due to other causes, including accidents, poverty, etc.

Lack of pan-India data on mortality along with the cause of death will keep the facts of the COVID-19 pandemic obfuscated. While one side will accuse the Modi regime of suppressing the total number of deaths, on the other hand, showing even a substantial increase in deaths without their explicit cause can’t prove that the COVID-19 pandemic has aggravated the crisis.

But does that mean no one died due to COVID-19? No, it doesn’t mean so. However, most of these 182,553 deaths, until April 21st 2021 with the latest one-day addition of 2,023 fatalities, happened due to lack of treatment. The patients aren’t killed by the virus itself but lack of oxygen, basic medicine supply and lack of hospital beds. It’s not an unforeseen crisis in 2021, unlike 2020, when the governments, at the Union and States, got the benefit of the doubt for their discombobulated condition; it’s deliberate negligence that has an obnoxious agenda of promoting the need for COVID-19 vaccination rather than augmenting the public healthcare infrastructure.

The sheer fear of oxygen shortage in hospitals, lack of medicines like Remdesivir, etc, are causing extreme panic among the people. The fear of imminent death is aggravating health risks for different sections of the population. Now one may ask the question, why this fear is generated around the virus? When India had seen many asymptomatic patients and a low fatality even in the first wave, then why the paranoia has increased manifold now? The reason can be traced in the proposed solution – COVID-19 vaccination.

While the Modi regime started the vaccination drive with much hullaballoo, the normalisation of the COVID-19 and the people’s reluctance to fear the virus, hampered the business prospects of the big pharma companies that are selling these vaccines through the government, without taking them through a long process of trials and errors.

It became a necessity to fuel the fear of death to increase the demand for COVID-19 vaccination, which is now given to the private players by Modi and all adults can avail it. As there will be an incessant shortage in the public healthcare sector, those who can afford the vaccine will be forced to buy from the open markets.

The neo-liberal economic mechanism has taken away the onus of providing universal healthcare from the government and turned health into a commodity that is marketed vigorously by Wall Street-based corporates. Over the years, governments are reducing their roles to insurance service providers rather than developing the public healthcare system to cater to newer challenges and threats. India’s public health expenditure was Rs 824.45 billion in the financial year 2020-21, and in the Union Budget 2021-22, Finance Minister Nirmala Sitharaman allocated only Rs 746.02 billion for it.

Amid a pandemic, if the Modi regime reduces core healthcare expenditures and buys vaccines, which are largely untested and are facing a lot of complaints, for a country of 1.4 billion people, then it will surely mop up the profits of global pharma giants who have failed to produce innovative patented formulations since years and have been surviving on generic drugs. When a country like the UK, ruled by a far-right fascist clique, is investing in medicines to treat the COVID-19 pandemic, the hyper marketing of vaccination, which couldn’t save many, including former prime minister Manmohan Singh, from the COVID-19, shows that something isn’t right.

Pranay Roy, the chief of NDTV, tweeted a paraphrased version of Nobel Laureate Michael Kremer’s town hall discussion in April 2020, where he said that the government shouldn’t mind fiscal deficit and even borrow to buy vaccines and stockpile them. This is sheer economic nonsense from an economist. The efficacy of the vaccines isn’t yet fully verified. Moreover, with 1.18% fatality and 80% of the patients remaining asymptomatic, the threat doesn’t need vaccines but effective treatment.

Only immense public investment in developing healthcare infrastructure can resolve the solution, but the government and the press, both tied with big corporate capital and the neo-liberal economy, can’t take that step and, therefore, they will continue to market only the COVID-19 vaccination to bedazzle the urban middle-class and elites, who have purchasing power. It’s a global scheme of big monopoly-finance capital and the cause of universal public healthcare will suffer if this scheme isn’t resisted effectively.