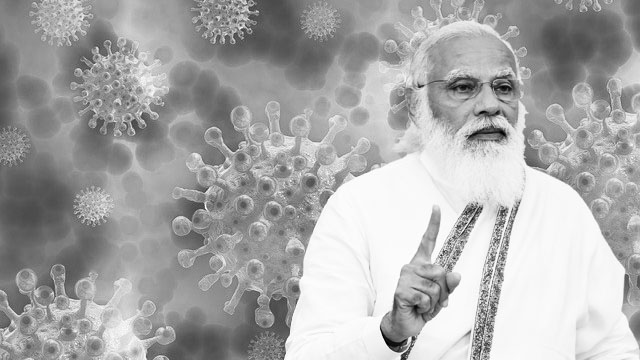 The COVID-19 second wave has caught India unprepared due to Prime Minister Narendra Modi’s sheer indifference. Rather than providing a transparent, hassle-free and organised system to assist the citizens to cope with the situation, the Modi regime’s absence from the COVID-19 scenario raises questions regarding its intentions. Modi’s reluctance to play his role is worsening the crisis.

According to the John Hopkins University’s COVID-19 tracker, out of the total cumulative 149.93m cases worldwide on Thursday, April 29th 2021, India alone has 18.38m cumulative cases, ranking second after the US. A record 379,257 new cases were diagnosed on Thursday, as per the Modi regime’s tracker, which, allegedly, suppress cases to mask the real COVID-19 situation in India.

The same data shows that 3,645 people died on Thursday, taking the total death toll to 204,832. This makes India globally rank fourth, after the US, Brazil and Mexico, in terms of COVID-19 deaths. The New York Times reported that India is suppressing its death data too. The 1.11% death rate on April 29th, as per the government’s records, arouses suspicion over the integrity of the data.

As India is passing through this catastrophe, the Modi regime’s absence from the COVID-19 scenario has thrown the people into a disarrayed state. Chaos is reigning throughout India. There is no organised system that would manage hospital admissions, maintain a waiting list, monitor self-quarantined patients, ensure supply and distribution of free oxygen to the needy and arrange medicines. Rather than managing the affairs through a government-controlled mechanism, the people are left to fend for themselves. With no accurate information shared on resource availability, the people have to run haywire.

This situation, the Modi regime’s absence from the COVID-19 scenario, allowed the upper-caste elites and middle-class, who have their caste-class privileges, strong network and influence, to acquire hospital beds, medicines, blood plasma and oxygen cylinders for themselves. Those with a network or with the ability to draw social media attention, have established their control over resources and are controlling their distribution.

Those, especially India’s marginalised poor people from ostracised Dalit, tribal, minorities and backward classes, are unable to get the same resources or bare minimum treatment as they lack an agency. They don’t have the class-caste influence or networking that can help them get a bed, oxygen or medicines. Hence, their sufferings and wailings, outside the hospitals, in the slums and villages, go unnoticed.

In any democratic country that runs according to a constitution, a pandemic outbreak would have forced the government to take control of healthcare in its hands and ensure a system is in place to provide equitable, transparent and hassle-free access to beds, oxygen, medicines, blood plasma, ambulances and even, in the worst cases, funeral services to the people without charging them a penny. But in India, the Modi regime’s absence from the COVID-19 scenario has paved the way for unscrupulous elements to profiteer at the expense of the people’s agony.

In Uttar Pradesh, even complaining about oxygen shortage can be an offence for which the government can seize the complainant’s property. Chief Minister Yogi Adityanath, the rabble-rouser monk-turned-politician belonging to Modi’s Bharatiya Janata Party (BJP), has declared that there is no shortage of oxygen in the state, mocking the people’s agony. The district magistrate must permit oxygen refilling, else people won’t get the gas.

In this scenario, when the governments, at the Union and state levels, have taken a hostile stance against the people, how can one combat the pandemic? Unaccounted deaths due to lack of basic treatment are rising but why is the state machinery not playing its role by taking control of sourcing and distribution of resources indiscriminately for equal access to healthcare for all? Unless the government plays a pivotal role in managing the sourcing and distribution of the resources to the end-user, the situation will allow only those with connections and network to avail treatment.

The governments collect taxes from their citizens and India has a large number of indirect taxpayers. These people fill the coffers of the government. The government of a country is bound to take control of the situation and play its role. But the Indian government, despite collecting taxes, didn’t show any interest in ensuring a hassle-free experience for the common people but only helped in marketing the vaccines of big pharma giants even though their trial data isn’t available in the public domain.

In January 2021, Modi went on a self-praising spree during the World Economic Forum’s (WEF) Davos Dialogue. He claimed that India has won against the COVID-19 pandemic. Now, when the second wave has hit India, aggravated by his campaigning for the BJP in the West Bengal Assembly elections as well as due to the Kumbh Mela, a Hindu festival attended by millions, the Modi regime’s absence from the COVID-19 scenario shows how it’s least bothered to fight the menace but all eager to appropriate the credit once the people collectively strive.

How long this ordeal will continue? How long will the marginalised and oppressed people allow the Modi regime to torment their lives and not fulfil its constitutional obligations? If the Modi regime’s absence from the COVID-19 scenario is tolerated or overlooked now, then the people will be crushed under the crumbled public healthcare system with a bleak hope of survival.