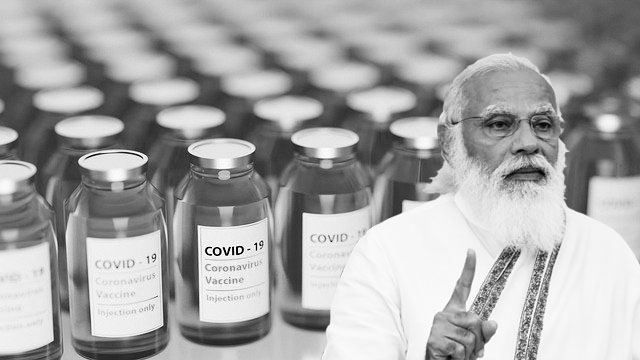 Prime Minister Narendra Modi’s government, following the template set by big western pharmaceutical giants, is depending entirely on vaccination to combat the COVID-19 pandemic. On Sunday, June 27th 2021, Mr Modi—once again—addressed Indians through his monologue– Maan Ki Baat (heart talk). Modi tried to alley the fears from the minds of India’s rural population regarding the COVID-19 vaccines. He said that the Indian people shouldn’t pay attention to rumours and unverified claims around vaccines and get themselves inoculated. Modi’s Maan Ki Baat on vaccination called the inoculation drive, mired in controversy, as the only way out of the COVID-19 pandemic.

During Modi’s Maan Ki Baat on vaccination, he spoke to a villager from Madhya Pradesh over the phone and told the latter not to fear the vaccine, citing his own experience of taking the jab and that of his mother who is approaching 100. But the prime minister deliberately concealed a few facts from Rajesh, the villager, which the people must know.

COVID-19 vaccination in rural India is in a quagmire. With nearly 65% of people living in the villages, the Hindustan Times reports that the city dwellers have 1.8 times more chances of getting vaccinated vis-à-vis their village counterparts. Up to July 3rd 2021, 35.12m people have been vaccinated in India, with 6.39m getting vaccinated on the last day, which is far less than the 8.1m record vaccination the Modi regime boasted on June 21st. Modi’s Bharatiya Janata Party (BJP)-led Madhya Pradesh, which scored the highest on June 21st by administering 1.6m doses, managed to administer only 18,762 vaccines on July 3rd, which proves how the June 21st record was scored to create a favourable optic and PR stunt.

On June 7th, a day before Modi’s announcement regarding the Union government taking over the vaccination drive of 18-44 years from the States, a Reuters analysis showed how in 114 of India’s “least-developed” districts, where 176m people live, only 23m doses were administered by June 2nd 2021. Even if we consider this fiasco a result of a coordination issue between the Union and the States, as the latter was handling 25% of the vaccination drive then, the data rings an eerie alarm and the Modi regime can’t afford such insouciance. When Modi’s Maan Ki Baat on vaccination emphasises on rural vaccine drive, then why the government’s data can’t show any progress in this regard.

The State Bank of India published a report that claimed that new COVID-19 cases in rural India surged to 48.5% in May 2021 vis-à-vis 36.8% in March 2021. Though the DownToEarth cited a Hunger Watch report to show that the urban poor suffer the worst, economically, due to the COVID-19 pandemic, the rural poor are worst hit in terms of healthcare as most villages lack any standard public healthcare service that can save lives in case of a major outbreak, leaving the people with no choice but to rush to the nearest cities, which was the prevalent scene during April and May 2021.

One of the major problems that now haunts India, without the people being aware of it at large, is the efficacy of the vaccines. Recently, Bharat Biotech released its third phase trial data on Covaxin, which the World Health Organization (WHO) has still not approved for use but is administered all over India. The new data shows the efficacy rate of the vaccine to be 77.8% on non-Delta strains and 65.2% on the Delta variant. Earlier, Covaxin had an efficacy rate of 81%. This fall in efficacy in the third phase trial shows that there may be further variations in the future as well. In that case, how will this vaccine save millions from the pandemic is a question of utmost importance.

Though the Modi regime denies the existence of an urban-rural divide in vaccination, its failure to provide adequate vaccines to the States has fuelled a crisis. The Modi regime provided only 10.09m vaccines to a state like West Bengal with a 100m population when the state government has been asking for 30m vaccines to cover both first and second doses of the 18-44 years and 45+ age groups. At the same time, the Modi regime is allocating more vaccines to the BJP-ruled States. West Bengal Chief Minister Mamata Bandopadhyay has been raising this vaccine discrimination issue, which is affecting the rural vaccination drive severely and puts to question the completion of vaccination by December 31st 2021.

In the days to come, it’s to be seen how the Union government can increase the vaccine allocations for the States, which are reeling under acute vaccine shortage and a deep crack has appeared on the dilapidated federal structure. Even though there has been a sharp fall in the number of new daily infections, which is below 50,000 at present, with 43,071 new infections on July 3rd, there were 955 deaths on a single day all over India and the total number of COVID-19 deaths has crossed 400,000. The continuation of three-figure daily death keeps the situation precarious.

Amid these, the recent news of Hyderabad-based Dr Reddy’s Laboratories joining the initiative of researching and developing medicine for COVID-19 treatment is positive news after the UK too undertook such a project. Rather than depending on the low efficacy COVID-19 vaccines, which have gone through fast-paced trials to reach the markets within a stipulated time frame, it’s time to look forward to innovative treatments to cure the infection of the RNA virus, something that will also need the government to increase its capital investment to augment India’s fragile public healthcare infrastructure.

Modi’s Maan Ki Baat on vaccination, alike his declaration of Tika Utsav (vaccination festival), is based on utmost hollow claims. The prime minister’s marketing campaign around the vaccines and portraying the “free” and “universal” characteristics of the vaccination drive as an act of the government’s “generosity” are extremely condemnable jobs. Right now, while India needs the expansion of the COVID-19 vaccination using a scientific and unbiased distribution of vaccine doses, the need to upgrade the public healthcare infrastructure is very important to tackle any future waves. The Modi regime must be forced by mass movements to augment the public healthcare system and to develop a subsidised and government-controlled distribution system of oxygen and medicines for COVID-19 treatment. Until the Modi regime seriously considers, accepts and implements the demands, the people’s movement must be intensified manifold.