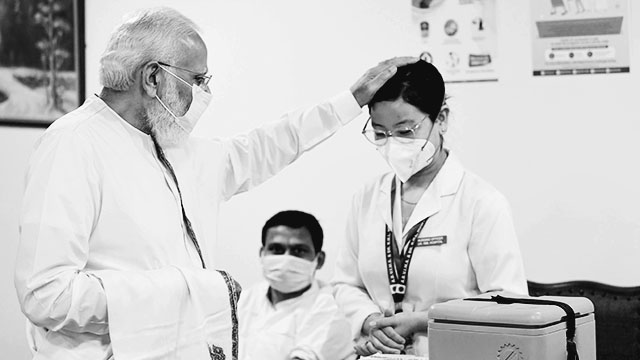 For the last few days, Prime Minister Narendra Modi’s government and the ruling Bharatiya Janata Party (BJP) have been celebrating India’s purported vaccination success. The BJP’s minions on social media and the mainstream press have been hailing Modi’s leadership, as India completed one billion doses of COVID-19 vaccines on Thursday, October 21st 2021, after 10 months of rolling out the programme and after five months of starting vaccination for all age groups above 18.

Modi came on television at 10am on Friday, October 22nd, to brag about this purported achievement. He patted his own back and took credit for “free vaccines” for all. He claimed that after administering the one billion doses of COVID-19 vaccines, India has reached a relatively secure stage amid the pandemic. Modi called this an achievement of “new India”, which is a synonym of his rule used by the BJP.

The Modi regime has turned India’s purported achievement of administering one billion doses of COVID-19 vaccines into a PR stunt, which the prime minister is leading from the front. The entire campaign aims at building a positive environment regarding the COVID-19 vaccination, targeting a rich yield for the BJP in the forthcoming Uttarakhand and Uttar Pradesh Assembly elections.

This means, 29.65% of adults have been fully vaccinated. Around 70% of the job is still not done. Earlier, the government had informed that 71% of Indian adults have received at least one shot of the vaccine. According to reports, only 7% of Indians have vaccine hesitancy.

As per Bloomberg’s vaccine tracker, 37% of the population is covered by the vaccination drive so far. Though the Modi regime wants to complete vaccination of the country by the end of 2021, the slow progress in vaccination, except for optics creation, has been jeopardising the inoculation drive’s main goal, to create herd immunity to thwart the further mutation or spread of the virus. It’s unlikely that the Modi regime will be able to vaccinate the entire 18-44 years age group by the end of 2021, despite having adequate vaccines to do so.

While Modi and the BJP are celebrating India’s one billion doses of COVID-19 vaccines, which translates to a coverage of less than 30% of the adult population, India’s neighbour China has already fully vaccinated 74.97% of its adult population. Months ago, China had administered its one billionth COVID-19 vaccine dose. Yet, the government there, which is categorised as “undemocratic” by western standards, had not resorted to publicity stunts of the magnitude undertaken by Modi.

So, what’s behind Modi’s vigorous promotion of the one billion doses of COVID-19 vaccines administered in India? Is it merely the forthcoming assembly elections in the BJP-ruled states like Uttarakhand and Uttar Pradesh? Is it an attempt to woo the people bogged down due to skyrocketing inflation and the rise of fuel prices? Is it merely assuring the people of the “better days” chimaera that Modi has been using to dupe the BJP voters for years now?

If the entire hyper marketing campaign around the one billion doses of COVID-19 vaccines administered in India is analysed, it will show that the objective of this campaign is to rebuild Modi’s image as a man in control.

When the second wave of COVID-19 hit India in April-May 2021, his government appeared disarrayed and had not taken any concrete step to fight the menace. Moreover, the onus of vaccinating the people of 18-44 years age group was passed on to the States by the Union, without providing adequate vaccine cache to them or the money to buy the jabs.

It was the Supreme Court that lambasted the Modi regime for its callous attitude regarding the vaccination of the 18-44 age group and forced it to undertake the national vaccination drive. While Modi and the BJP keep using the term “free vaccines” to make the people believe that it’s an act of generosity of the prime minister, it hides the fact that no country around the world has charged its citizens money for the COVID-19 vaccination programme.

Yet, by allowing two types of vaccinations—one that’s free at government centres and the other being the paid one in the private clinics—Modi allowed a rich-poor divide in easy vaccine access. While most of the urban middle-class and rich have paid for their vaccine and got it conveniently at private clinics, most poor struggled to get their jab at the overcrowded government facilities. How can then Modi claim “vaccine equality”?

At a time when Modi’s photo on COVID-19 vaccinations raised questions and the certificate was invalidated in the UK, bringing India into a diplomatic tussle with its former colonial ruler, at a time when Bharat Biotech’s indigenously-developed Covaxin has not received validation from the World Health Organization (WHO), even though the Modi regime had poured billions into the development of the “Indian vaccine”, Modi’s narcissist marketing of India’s one billion doses of COVID-19 vaccines mocks itself.

Moreover, when the rich and the middle-class paid for their vaccines, how can Modi take claim for their jabs? Also, when the entire vaccination programme—alike the free food grain programme—is running on taxpayers’ money, how could Modi claim the credit? Yet, he didn’t desist from mentioning the role of his “new India” behind India’s vaccination.

For those who have lost their near ones due to lack of oxygen, hospital beds and medicines, Modi will be remembered as the Nero who played the violin while the city was burning. He was the one who overlooked the floating corpses on the Ganges and asked people to share positive stories to stay happy during the pandemic. He was the one who went missing from the cameras when pyres were burning en masse in different Indian cities. Modi will be remembered as the prime minister who choked citizens to death by denying them oxygen when they were gasping for breath.

Can the one billion doses of COVID-19 vaccines narrative help Modi to bedazzle the people temporarily? Yes, it can. But can it also help him to reap long-term political benefits? No, it can’t, as the pandemic isn’t going anywhere but is gaining strength underneath, concealed from the public gaze. When and if it hits back with huge potent, the Modi regime’s carefully-blown balloon will burst and the government will stand uncovered. It won’t be a catastrophe for the regime, but also for the country and its people, who are vulnerable to new mutated variants of the RNA virus.