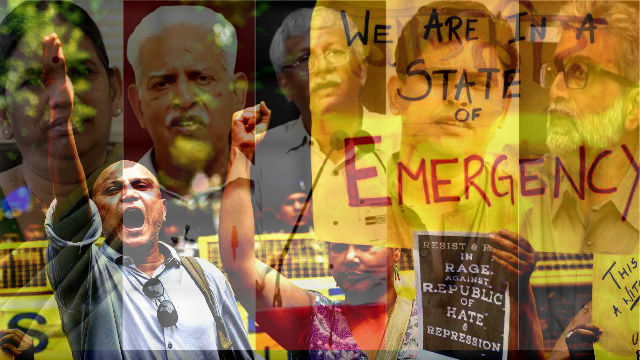 The National Investigation Agency (NIA) has submitted a draft chargesheet before a special court in Mumbai against 15 arrested and six absconding accused in the Elgar Parishad case. Surprisingly, the NIA has dropped the charge of conspiracy to assassinate Prime Minister Narendra Modi by the accused and replaced it with a conspiracy to kill a “public functionary”. The NIA’s draft chargesheet against Elgar Parishad accused isn’t merely gibberish but stinks of naked vengeance.

Following the template set by Modi’s ruling Bharatiya Janata Party (BJP), the NIA’s draft chargesheet against Elgar Parishad accused, filed after three years of the first arrests, is based on the precinct of “Urban Naxal” narrative. According to the NIA’s draft chargesheet, the Elgar Parishad accused are allegedly associated with the banned CPI(Maoist).

The draft chargesheet, which also named Jesuit priest Fr Stan Swamy, who was killed last month in custody due to state apathy, alleges that the accused were planning to topple the elected government through an armed uprising to establish a CPI(Maoist)-led government and even arranged weapons and money for the same purpose. It alleges that the accused provoked violence through their speeches before the Dalit rally to commemorate 200 years of the Bhima Koregaon war on January 1st 2018. The upper-caste Marathas clashed with the Dalits during the rally and two people were killed.

The NIA has filed 16 common charges against the accused, including Indian Penal Code (IPC) sections 153A (promoting enmity), 505(1)(B) (public mischief), 121 (waging or attempting to wage a war against the state or abetting), 121A (conspiracy to commit certain offences against the state), 124A (sedition) read with 34 (common intent). Sections of the draconian Unlawful Activities (Prevention) Act (UAPA), dealing with terrorism, are also levelled in the NIA’s draft chargesheet against Elgar Parishad accused.

While the Pune Police started the arrests in 2018, when Maharashtra was ruled by the BJP, its narratives, like Wilson storing a letter in his computer that asks for killing the prime minister and other CPI (Maoist) details, stirred controversy all over the country. Though the US-based digital consultant Arsenal Consulting has proved that the “evidence” was planted in Wilson’s computer, following which he approached the Bombay High Court, the NIA chargesheet continues to blabber the baseless allegation, centring the “incriminating evidence”.

Unsurprisingly, the NIA’s draft chargesheet against the Elgar Parishad accused remain mum on those two who were accused of provoking violence at the very beginning. Soon after the Bhima Koregaon violence, a case was lodged in Pune’s Shikrapur police station against Sambhaji Bhide and Milind Ekbote — leaders of Hindutva fascist outfits named Shiv Pratishthan Hindustan and Samasta Hindu Aghadi, respectively — for “orchestrating” violence against the Dalits.

Both Bhide, who will soon turn 88, and Ekbote are associated with the Rashtriya Swayamsevak Sangh (RSS), the BJP’s paternal body. Even Hindutva fascist stalwarts like Modi revere Bhide. Hence, Bhide wasn’t even called once by the Pune Police for interrogation in all these three years, while Ekbote managed to remain scot-free after he got bail from a lower court. No legal actions were taken against these two even after the Shiv Sena-Nationalist Congress Party (NCP)-Congress party alliance, the Maha Vikas Aghadi (MVA), came to power in 2019.

What made the duo so omnipotent that they remain immune from the law, while the activists and intellectuals are tormented by the state using the “Urban Naxal” label? It’s the RSS-BJP’s control over the NIA and the state apparatus that ensures that men belonging to the Hindutva fascist camp can operate with sheer impunity. Though the MVA opposes the BJP in words, in deeds it’s also a lackey of Hindutva fascism as it’s a coalition of upper-caste Hindu Maharashtrians and feudal landlords.

Chief Minister Uddhav Thackeray’s Shiv Sena was a partner of the BJP for decades and was a part of the dispensation when the Pune Police built up a false case against the Elgar Parishad accused. For the Shiv Sena, it will be a political harikari in case it opposes the BJP’s manoeuvres regarding the Elgar Parishad case, as its agitated upper-caste vote bank will slip away from its grip then. The BJP knows this well and exploits Thackeray and the MVA, whenever the situation permits it. Thackeray remains elusive on the issue as well.

If the Elgar Parishad accused are acquitted, at any level of trial, then it will be a major global ignominy for the BJP-RSS as well as for Modi. They have used the “Urban Naxal” theory to demonise their opponents. The case has gained global attention after the Modi government was accused of pursuing a vendetta regime. The recent revelations regarding the usage of Pegasus spyware to hack and monitor the phones of the accused have also raised doubts regarding the government’s narrative.

In such a situation, especially when Modi and his BJP are facing anti-incumbency waves, the NIA’s draft chargesheet against Elgar Parishad accused will help the saffron camp to stoke xenophobia regarding a purported conspiracy to overthrow the Modi regime by force. The RSS leadership is expecting that such a hype, along with communal vitriol, can provide leverage to the Modi regime by the end of the current tenure in 2024. However, as the country’s situation has drastically worsened, as the people’s discontent continues to rise and affect the political discourse of the country—as exhibited by the farmers’ movement that has been shaking the BJP’s roots in northern states—and movements, there are chances that such narrative setting may boomerang as the oppressed people’s support may grow for those who dare to dissent and oppose the Modi regime.