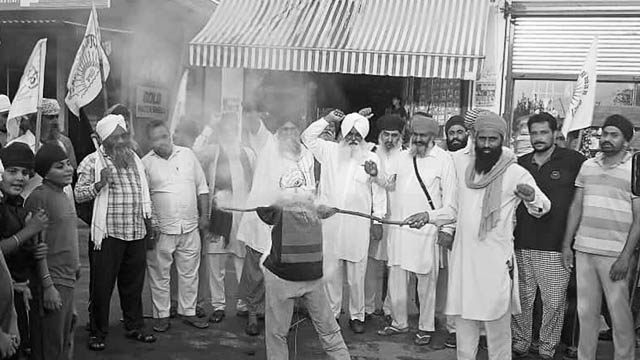 On Saturday, August 28th, farmers protesting Haryana’s ruling Bharatiya Janata Party (BJP) leader and Chief Minister Manohar Lal Khattar’s visit to Karnal, faced macabre police atrocities, after the sub-divisional magistrate (SDM) Ayush Sinha ordered the police to “smash the heads” of those who breach the barricades at the Bastara toll plaza. The police violence against farmers at Karnal brought the ongoing nine-month-old farmers’ movement against three farm laws passed by Prime Minister Narendra Modi’s government to the forefront of India’s mainstream media coverage. Parallels were drawn between this gruesome attack and the Jallianwala Bagh massacre of 1919 by General Dyer.

Sinha’s audacity to order the police to “break heads” of farmers, the video of which became viral later, caused ignominy for the BJP and its allies in Haryana, as well as exposed the “farmer-friendly” façade that the Modi regime has been using to dupe the food producers. While one section of the BJP and its allies opposed the police violence, which severely wounded several farmers, and demanded action against Sinha, a 2018-batch Indian Administrative Service (IAS) bureaucrat, another section, and the bureaucratic machinery, continues to support the officer and the violence.

Khattar, who has been facing severe farmers’ opposition, wherever he goes in Haryana, as well as the top BJP leaders who are unable to visit the villages due to massive public resentment against the saffron party, didn’t shy to gloat. “They are free to raise their issues in a democratic and peaceful manner. If they block highways and throw stones at the police, the police will also take steps to maintain law and order. We will look into it and take necessary action,” Khattar told the press, blaming the farmers. Such uninhibited glorification of state violence is quintessentially BJP’s trademark.

Jannayak Janata Party (JJP)—one of the BJP’s allies in Haryana—leader and Deputy Chief Minister Dushyant Chautala, who is scared of losing his Jat vote bank, condemned the attack and claimed that the government will take action against Sinha for the brutality. “I am pained from yesterday’s incident, the way statements that don’t meet ethical standards of an IAS officer were given by an IAS officer. Action will be initiated against him as per framework of time.” Chautala told the media regarding Sinha on Sunday.

Varun Gandhi, the BJP’s MP from Uttar Pradesh, condemned the police violence against farmers at Karnal and demanded action against Sinha. Gandhi said if the clip of the IAS officer uttering the words isn’t doctored, then it’s a serious problem. “I hope this video is edited and the DM did not say this… Otherwise, this is unacceptable in democratic India to do to our own citizens,” Gandhi tweeted.

The Samyukta Kisan Morcha (SKM)—the steering body of the farmers’ movement at Delhi’s borders and neighbouring states—called for a meeting on August 30th to decide on the course of action regarding the police violence against farmers at Karnal. Gurnam Singh Chaduni, an SKM stalwart, alleged that the attack on the farmers was pre-planned and demanded action against the IAS officer. Rakesh Tikait, another SKM leader, said that the “official Taliban” (Sarkari Taliban) has occupied the country.

“Yesterday, an officer ordered (policemen) to hit farmers on their heads. They call us Khalistani. If you would call us Khalistani & Pakistani, we would say ‘Sarkari Talibani’ has occupied the country. They are ‘Sarkari Talibanis’,” Tikait said. He also accused Khattar of behaving as General Dyer. Ironically, Modi dedicated a renovated complex of the Jallianwala Bagh memorial to the nation on Saturday itself.

Apart from Khattar and the BJP, the Karnal administration came out in support of the SDM. There have been claims that the video that is circulating is doctored but the administration. Sinha has been praised in galore, while his crime has been overlooked continuously. This shows how the bureaucracy unapologetically stands against the people, the taxpayers, who pay them their salaries and fund their luxurious lifestyle set in a colonial template.

All these atrocities are committed with a claim that they are beneficial for the farmers. Modi’s farm laws, analysed here, don’t allow farmers to approach the court for justice or relief in case they are duped by the corporate houses. Instead, the aggrieved farmers must approach their SDM and the bureaucracy for justice. The same SDM who will order cracking of their heads. Who can believe such fables of bureaucrats helping farmers get justice? The police violence against farmers at Karnal has shown how the bureaucracy treats the farmers –as expendables.

The colonial bureaucratic machine was developed by the British imperialists to ensure India has state machinery that can suppress its people’s movements and aspirations for freedom. Even after gaining the much-hyped “independence” in 1947, the colonial-era bureaucracy wasn’t purged but the old wine was poured in a new bottle with a new label. However, on occasions like these, the bureaucrats like Sinha exhibit their class hatred towards the farmers as well as their bigotry and caste-supremacist minds. Putting the fate of the farmers in the hands of such bureaucrats will eventually become a catastrophe for India and its agriculture. Unless the devastating laws are repealed, incidents like the police violence against farmers at Karnal will continue, as, despite all attempts by the BJP, the awakened farmers won’t budge and give up. Nine months of their movement proves this beyond doubt.