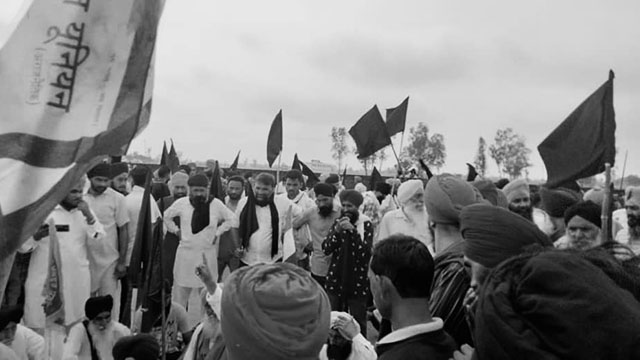 Four farmers were reportedly killed, and eight others were seriously injured after they were mown down by a convoy of vehicles associated with the son of a Union minister of state in Tikunia of eastern Uttar Pradesh’s Lakhimpur Kheri district. The farmers, affiliated with the Samyukt Kisan Morcha (SKM)—the umbrella body of 40 farmers’ organisations steering the movement against Prime Minister Narendra Modi’s corporate-friendly farm reforms—were returning after protesting the Tikunia visit of Deputy Chief Minister Keshav Chandra Maurya and Union Minister of State for Home Affairs Ajay “Teni” Mishra, when they were hit by the vehicles. Four men of the convoy reportedly also died when the farmers retaliated.

The incident triggered a nationwide outcry; however, the corporate-controlled mainstream media has been downplaying it. The SKM alleged that cars in the convoy of Ashish Mishra, the son of the Union minister of state, knocked down the farmers returning from a helipad at Maharaja Agrasen ground, where Maurya and the minister were supposed to land. The protest rally, attended by thousands of farmers, forced the deputy chief minister and the union minister of state, who is a member of the Parliament from Kheri, to cancel their visit. This irked their supporters.

Farmer leader Tajinder Singh Virk was also injured in the incident. Other farmers expressed their anger, after recovering from the shock. Footages—reportedly from the site—showed vehicles in the convoy of Mishra set on fire. To save his son, the Union minister told India Today that neither he nor his son was near the incident and that three-four BJP men also died in the “accident”. The farmers are alleging that the BJP-led governments, both at Union and state level, are exerting pressure on the media and the police to shield the minister’s son

Opposition parties like the Congress party, the Rashtriya Janata Dal (RJD), the Bahujan Samaj Party (BSP) and Samajwadi Party (SP) have condemned the Lakhimpur Kheri massacre. Most of these parties are supporting the farmers’ movement and are trying to encash it for their electoral benefit in the 2022 Uttar Pradesh and Uttarakhand Assembly polls. The farmers had earlier declared that they will assist the Opposition in bringing down the BJP in these two states next year.

The farmers have declared that they will be organising agitations throughout Uttar Pradesh to demand the arrest and prosecution of Mishra Jr for the Lakhimpur Kheri massacre. They will organise protests at the offices of district magistrates, sub-divisional magistrates, etc. According to Ajnala, it’s the massive success of the September 27th all-India strike that triggered the BJP, as it earlier doubted the farmers’ power to create any impact in BJP-ruled Uttar Pradesh and Uttarakhand. Earlier, the Union minister of state had threatened to crush the farmers’ movement by force. The farmers have been consistently waving black flags at BJP legislators and ministers in different states to oppose the farm laws that will destroy India’s agriculture and food security and help corporates profiteer.

Mishra Jr’s alleged modus operandi in the Lakhimpur Kheri massacre—using vehicles to mow down people—followed the Al-Qaeda template used in European countries. This massacre manifested the sheer frustration of the BJP and exposed how the party resorts to terrorism to crush its opposition. Ironically, only a day ago, Modi told in an interview to a right-wing magazine that he misses critics and their criticism. The lack of critics is ascribed to his tyrannical regime’s fetish of incarcerating dissenters who challenge the Hindutva fascist hegemony. Now, the opponents are even crushed beneath vehicles to stop them from protesting. This is the peak of India’s feudal-comprador capitalist dictatorship.

Still, the Hindutva fascism-incensed mainstream media couldn’t dare to call the Lakhimpur Kheri farmer massacre a terror attack. It’s unlikely that Mishra, his son and Maurya will be prosecuted for their alleged complicity in this gory incident. Even though the BJP’s supporters have been found gloating over the killing on social media, this gruesome Lakhimpur Kheri farmers’ massacre will be soon covered up by the unholy nexus between the BJP, the state machinery and the toady press.

The farmers have suffered incessantly due to the tyranny unleashed by the Modi regime and the BJP since they started their movement against the draconian farm laws. From November 2020 onwards, when their cavalcade from several states reached Delhi’s border, nearly 700 farmers had been killed, directly and indirectly, by the BJP-ruled state machinery. Apart from police atrocities, attacks from the BJP goons and extreme weather conditions, the farmers also have been suffering from vilification drive by the press.

As the crucial Uttarakhand and Uttar Pradesh Assembly polls draw closer, there will be a hike in atrocities on farmers like the Lakhimpur Kheri massacre. However, whether the farmers can exhibit their perseverance and remain firm in their movement against the Modi regime and its obnoxious agenda, will decide the fate of the country’s politics. The farmers mown down by Mishra’s son will then, metaphorically, act as the very seeds they had sown in their fields. The harvest will be quite lethal for the BJP and its brand of fascism in Indian polity.