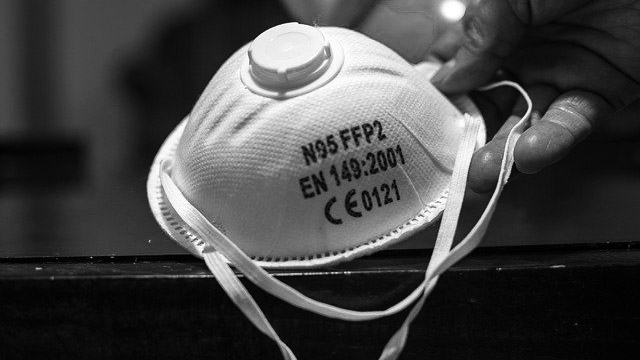 A piece of sensational news has become viral since the last two days on the internet during the peak season of the Coronavirus (COVID-19) pandemic. The news says that China has supplied Pakistan masks made of undergarments instead of N-95 masks. While this story is used to ridicule Pakistan, it also stirred a storm over China purportedly betraying its “all-weather ally”.

This correspondent came across a video clip purportedly made by an Urdu television channel named NBTV. The caption says “China ne chuna laga diya” (China has conned us). It said: “China would send N-95 masks to Sindh but they sent masks made of undergarments. The Sindh government too, without making checks, sent the masks to the hospital where the doctors and nurses declared them to be a joke.” It’s needless to say such an incident would’ve been quite significant in the present global political scene with a potential to trigger a massive upheaval.

Apart from the minor news portals and fringe blogs, mainstream media outlets like the ANI, Republic channel, Indiatimes, the Business Standard, etc, have published this story.

Apparently, the story was first published by the Republic, at 10.52am on April 4th 2020, with the headline “Pak’s ‘all-weather Friend’ China Sends Masks Made Of ‘underwear’ Amid COVID-19 Outbreak” (sic), which cited a tweet by a notorious fake news-peddler and Hindutva hate-monger Gaurav Arya as its source. Arya’s tweet got 31.6K likes and 13.8K retweets and cites the clip purportedly made by the NBTV, which is projected as a Pakistani news channel.

From the Republic, the story was republished by the ANI at 9.26am on April 5th 2020. The ANI gave a major twist to the story. It didn’t cite the Republic’s story as its source, rather composed the story as a wire sent by an Islamabad-based correspondent. It called the source a “local Pakistani news channel”, which is a major slip in journalistic standards as a correspondent won’t add “Pakistani” with “local” or vice versa when reporting from Pakistan itself. The ANI’s correspondent, which seems an imaginary one, called the News Break TV as Lahore-based, while on Google Map, it’s shown in Karachi.

This story was further picked up by the Business Standard, which published it at 9.35am on the same day, followed by a Malaysia-based website The Malaysia Sun, which later published it. The Indiatimes story, which was filed by Shreya Chauhan, cited the story of The Malaysian Sun’s story, became the highest shared story of the author so far with 33.3K shares on social media. This made the news viral though a lacuna remained visible over the story’s genesis and authenticity.

When these hyper-nationalist Indian press and minor websites were recycling the story, the giants of the foreign mainstream, especially the western press infamous for their anti-China standpoint, remained silent. None of the major media outlets like the BBC, Reuters, the New York Times, Huffington Post, Al-Jazeera, etc, spared a line on this story. Even the Pakistani mainstream giants like The Nation, the Dawn, etc, also didn’t publish anything related to this incident, which would’ve been a major ignominy for its government and diplomacy.

No evidence of the allegation over masks made of underwear

Now if we see the video purportedly made by the NBTV, it says that China has supplied masks, from its Xinjiang province, made of underwear, to the Sindh government. The clip shows no statement from Sindh government’s officials. It also shows no Pakistani doctor or paramedics coming on record to lodge a protest. Even though the clip shows a few underwear-made masks, it shows nothing that can prove that the masks were in Pakistan or were sent by China.

One of the photographs used by the news portals shows men, with Mongolian looks, wearing masks made of undergarments and a signboard visible in the background has something written in Chinese or Korean. It’s clear the photo wasn’t from Pakistan. The clip too looks not from Pakistan and shows no consignment and has no statement on record from the government officials.

Who is News Break TV or NBTV? How reliable is this channel as a source?

So, the question is, what’s the authenticity of the source of this viral story? The Republic, ANI, Indiatimes, Business Standard, etc, have cited News Break TV, or the NBTV, as the source of this news. However, neither NBTV’s website nor its Facebook handle carries this story. Its credential as a news channel is also dubious. Four people have reviewed this so-called news channel on Facebook and gave it four and a half out of five stars. The posts on the Facebook page of NBTV are irregular, which is unlikely to happen in the case of a television channel. The last post, while writing this story, was published on March 24th 2020, before that posts were published on March 23rd, March 11th and February 27th respectively.

There is also a severe disparity between the NBTV logo shown on the video and the one used in the website. Can an established news outlet do it? Can an established news outlet run without a regular flow of content as does the NBTV? Even if we accept that it’s a media outlet genuinely operating, though there is no such channel accredited to the Pakistani broadcaster body, still it’s not a credible source to be cited to make a viral story in India. However, in the era of web journalism, where facts are buried in the pit of lies by the corporate-controlled mainstream press, success is measured in the ability to turn any lie into a viral apocryphal using debauchery.

Thus, the so-called “reputed” media outlets of India are now under question for their choice of a dubious source for their breaking story. But this isn’t a new thing for them. The fact-checking websites like altnews.in and others have always exposed the Indian corporate-controlled mainstream media’s sheer Islamophobic and bigoted fake news peddling.

The problematic credentials of those who peddled this fake news

Who are these media giants that have blistered this fake news and made it another epidemic on the internet? Well, if we delve into their credentials, it will be clear what has made these media entities to peddle fake news like this story.

The ANI has been known as a propaganda platform of Prime Minister Narendra Modi and his Bharatiya Janata Party (BJP). From saving Modi and the BJP in the Rafale Jet scam to peddling fake news to fan Islamophobia, the ANI has earned laurels of fame. Its editor-in-chief, Smita Prakash, the wife of its CEO Sanjiv Prakash and daughter-in-law of its founder-chairman Prem Prakash, didn’t shy wearing her political allegiance on her sleeves and has always shown her obeisance towards Modi.

BJP leader Rajeev Chandrasekhar founded Republic channel with television Gadfly Arnab Goswami to amplify Hindutva fascist cacophony in favour of the Modi regime. The Republic channel has unapologetically shown its affiliation towards the BJP and Goswami never wasted any opportunity to prove his loyalty and servility towards those in power.

Indiatimes is a part of the Times Internet Group, which is owned by Vineet Jain, who was caught in a sting operation agreeing to peddle Hindutva fascism’s agenda through all his media platforms in lieu of cash. The Times Group has been complicit in advancing Modi’s Hindutva fascist agenda on a number of occasions and their television channel Times Now, where Goswami worked earlier, has been notorious as a Hindutva propaganda outlet supporting Modi unapologetically.

Why Sinophobic and Islamophobic fake news is peddled in the midst of COVID-19 pandemic?

The question isn’t about peddling fake news, but about showing visceral hatred against China during the period of a worldwide humanitarian crisis. What was the need for this Sinophobic content? Was this merely to amuse the readers or to titillate them with Sinophobia and Islamophobia at the behest of the BJP and Modi’s Hindutva fascist regime? Or was it an attempt to identify China with communists, the Pakistanis with Islamists, show a nexus between the two and also ridicule the latter while vilifying the former?

Whatever may be the cause, the result that can be seen today is that independent journalism has died a painful death and fake news-peddling, spreading rumours, etc, are becoming mainstream. It’s time now we guard the important pillar of a successful democracy, ie, the press, and ensure that the people are taught to boycott the hate-mongers in the society. Such propaganda won’t stop, but it’s the task of the progressive and democratic forces to expose such perversion of truth to ensure that nothing but facts reach people through the press.