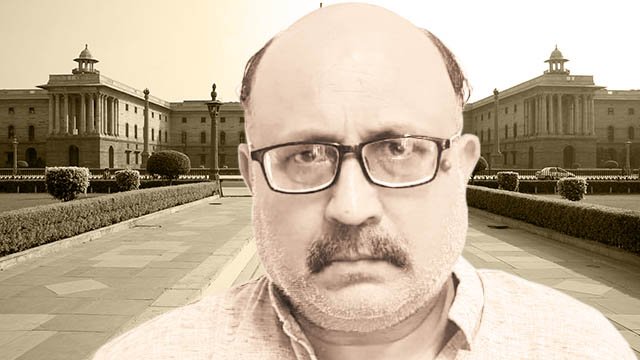 In the era when xenophobia and amplified jingoism captivate human minds by tossing out common sense, it’s easier for sclerotic regimes to construct enemies, foes, and purported threats to titillate such gullible minds. What can better exemplify this but the arrest of Rajeev Sharma, a freelance journalist and strategic analyst, who wrote opinion pieces for China’s Global Times? Sharma was arrested by the Delhi Police under the Official Secrets Act (OSA) on September 14th 2020. The Delhi Police alleged that Sharma was spying for the Chinese and had in possession some military secrets, which he was allegedly passing on to the Chinese. Along with Sharma, a Chinese woman and her Nepali help are also arrested by the Delhi Police’s Special Cell on charges of spying.

Soon after the news of Sharma’s arrest under OSA became public, he was vilified on social media as well as in the publications close to the ruling Bharatiya Janata Party (BJP) and its parental body Rashtriya Swayamsevak Sangh (RSS). The infamous right-wing propaganda outlets republished the police story, vindictively portraying Sharma as a culprit. Most BJP-lapdog television anchors and toady journalists hyped the Delhi Police’s story on Rajeev Sharma and accused him of being a spy. There was no visible show of fraternity from the press or the mainstream journalists. Ironically, Sharma made a video on the sorry state of Indian media just before his arrest.

Sharma isn’t a Muslim, so there was no baying for his blood on the streets. There was no attempt to vilify his community as well. But the question that has popped up prominently is why Sharma, who would contribute a few pieces to the Global Times or would write his blog or appear on his YouTube channel with strategic analysis and even mythological interpretations, become the Delhi Police’s target? Moreover, how would Rajeev Sharma source defence documents related to troop positioning in a strategic location like Eastern Ladakh?

So far, the Delhi Police didn’t give any specifics, but on September 19th, Special Cell DCP Sanjeev Kumar Yadav said Sharma was writing on defence-related issues for some Indian media organisations, as well as China’s Global Times. Yadav alleged that Sharma was contacted by the Chinese spies in 2016. Sharma was also in contact with some Chinese intelligence officers, Yadav alleged. According to Yadav, the freelance journalist got Rs 4 million in the last 18 months and he was getting $1,000 for each information passed on to the Chinese.

While reporting these police statements, none of the media houses questioned Yadav or others for what evidence they have got against Sharma and who provided him with the sensitive documents. Such defence-related leaks can’t take place if some key elements in the Ministry of Defence aren’t in connivance with the Chinese. Rajeev Sharma, even if we accept the charges at their face value, can’t source the documents from the Ministry of Defence on his own and needs an insider’s help. If an insider has passed such highly confidential information, stealing them from the high-security complex, then it means that Sharma is merely a pawn, there are Chinese moles sitting in crucial positions within the Ministry of Defence.

Then when would the Delhi Police, which recently drafted 1.1 million-page-long charge sheet against Umar Khalid in the “Delhi riots” case, will crackdown on such elements with the help of the Indian military establishment? How soon the Delhi Police will arrest such moles? Time is a crucial matter in such anti-espionage activities and when one member of the chain is arrested, the loop needs a faster closing to avoid people evading arrest.

Rather than doing press meets with an arrested scribe, after five days of his arrest, the Delhi Police should’ve arrested the entire network and exposed the nexus between the unscrupulous elements. But it didn’t arrest anyone from the top echelon of the defence system, who can pass on sensitive information to Sharma. This negligence points towards two possibilities.

Firstly, the Delhi Police has no information regarding the insiders in the Ministry of Defence, and due to the lapsed time, such a mole must have got the warning signs and strengthened defence or have fled to evade arrest. But there are no warrants issued by the Delhi Police naming any top defence official; no lookout notices are issued either to nab the mole.

Secondly, it may be the case that there were no moles at all, and the entire charge is a sham one, designed to gag Sharma, who, despite maintaining a balanced view, has been a vocal critic of the Modi regime and its policies. Rajeev Sharma’s writings didn’t eulogise the Chinese position, but emphasised on pragmatism, stressed on diplomacy, where India is failing to match China.

The developments prove that there has been no attempt to nab any mole and there has been no upheaval in the defence quarters. Rather, it seems, at a time when the Modi regime, guided by the skewed foreign policy of the RSS-BJP, is facing drubbing over its adventurism, any sane voice demanding a course correction, like Sharma, will face the wrath of the state machinery. Voices that question the government’s position will be gagged forever.

Driven by the hubris over the US’s unabashed support in case of a military conflict with China, the Modi regime is surviving on drumming jingoism and rhetoric against the giant neighbour. It’s imperative for New Delhi to delink its bilateral relationship with Beijing from its ties with Washington DC––strengthened as per the RSS-BJP agenda of greater unity between the US, Zionist Israel and India––for achieving any real diplomatic breakthrough. This pro-imperialist foreign policy will be pushing the country towards greater turmoil in the days to come. People like Rajeev Sharma will be vilified for writing sensible content on a Chinese site, while millions of Indians will be used as cannon fodders to appease the war appetite of a handful of rich.