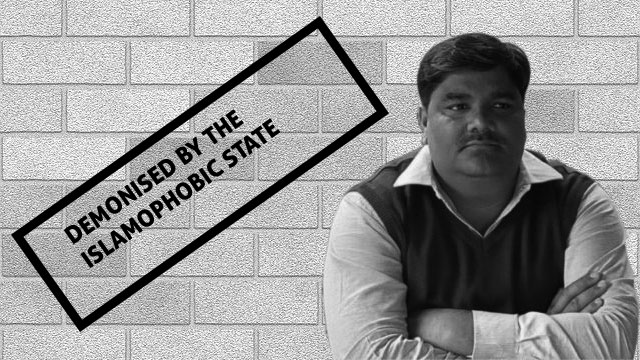 The police state that India has officially turned under Prime Minister Narendra Modi‘s Hindutva fascist regime is exemplified repeatedly in the actions of the state whenever the ruling Bharatiya Janata Party‘s (BJP’s) agenda demands so. After dismissing the pleas of bail for the student activists and Muslim intellectuals framed in the case of the state-sponsored anti-Muslim pogrom in Delhi that took place from February 24th to February 27th in northeastern parts of the city, the Delhi Police, notorious for its ties with the Rashtriya Swayamsevak Sangh (RSS), launched a new series of vicious propaganda to fuel Islamophobia by planting fabricated stories in the toady media outlets. Recently, such a Delhi Police story on suspended Aam Aadmi Party (AAP) councillor Tahir Hussain, accused of fomenting violence and vilified by media propaganda, has been amplified many times to suit the narrative of the RSS-BJP.

The Delhi Police filed a chargesheet stating that Hussain has allegedly “confessed” his role in the anti-Muslim pogrom and has overseen the killing of Hindus when in reality it was the Muslim community that faced a wave of synchronised and concerted violence from feral Hindutva thugs organised by the RSS and its affiliates. Suddenly, after a lull in the propaganda against him for months, the very propaganda due to which softcore Hindutva peddler, AAP chief and Delhi’s Chief Minister Arvind Kejriwal suspended Hussain from his party without allowing him a chance to clarify his position, the Hindutva camp is back, baying for his blood.

Suddenly, Tahir Hussain occupied the centre-stage of the Sangh conglomerate’s social-media campaigns when citing the RSS’s unofficial mouthpiece OpIndia’s article as a source, it was alleged that Hussain has confessed about his complicity to the Delhi Police. The article cited a Delhi Police chargesheet as reference. Though, under the Indian Code of Criminal Procedure (CrPC), only a judicial magistrate can record a confession made voluntarily. That’s what the CrPC Section 164 states. Any confession that’s not made voluntarily, without pressure or torture, by an accused to a magistrate in private understanding well that such confession can be used as evidence against the accused in the court of law, will not be considered valid. Thus, a confession made by Tahir Hussain to the Delhi Police holds no legal value. But to make trendy news at the times of Islamophobia, it’s valuable.

For months, a vilification campaign is going on incessantly targeting Hussain and his associates, who were resisting the aggression of a feral Hindutva-incensed mob at their locality by dropping bottles, bricks and petrol bombs on them from his rooftop, after the Delhi Police, which actively assisted the mob, refused to help them. Hussain, who presented his version of the story to a popular Hindi channel and even publicised recordings of his frantic calls to the Delhi Police for help, was finally arrested under false charges and thrown behind the bars. “Tahir Hussain”, the name itself, became synonymous to Delhi’s ghastly pogrom targeting the Muslims. He is even accused of killing an Intelligence Bureau operative named Ankit Sharma, which he has vehemently denied.

Apart from Hussain, a petty AAP leader, the Muslim organisers of the movements against Modi’s discriminatory citizenship matrix have been arrested indiscriminately and blamed for instigating and leading a pogrom that ironically killed Muslims en masse. The Delhi Police is still on an arrest spree targeting Muslim activists and students to ensure that the community loses its voice and can be subjugated with brute force. The BJP is trying to derive electoral leverage from the arbitrary arrests and by portraying the Muslims as the culprit of the Delhi pogrom. This has paid rich dividends to the BJP.

Tahir Hussain is not Kapil Mishra. His name doesn’t smell of upper-caste, upper-class privileges. His former colleague Mishra could be embraced by the BJP and hailed as a hero of the majority community, but he will be vilified and tormented for his identity. While self-protection, when facing imminent death, is not a crime according to the Indian Penal Code, the sheer twisting of the story, where the AAP councillors men were found in a video resisting the efforts by the Hindutva goons to torch his house and kill all members, to suit the Hindutva narrative with the help of the police easily helped the BJP to condemn him for a crime he never committed.

The upper-caste Hindu elites and middle class of Delhi and elsewhere care a lemon for the truth or facts. For them, the name “Tahir Hussain” itself is criminal and, hence, any form of persecution is justified. It’s unlikely that Hussain will be released any time soon or the system will deliver justice to him. However, what’s interesting is to see the BJP’s periodic efforts to titillate the masses against him and his community, as well as the total capitulation of the AAP to Hindutva fascism, despite being a favourite bait for Delhi’s elite liberal-democrats who called it an alternative to Hindutva fascism. The way the AAP has disowned Hussain exemplifies how mainstream, so-called secular parties––whom the BJP and RSS call pseudo-seculars––have disowned the Muslim community to stay relevant in Indian polity where Hindutva fascism is mainstreamed by the Modi regime.