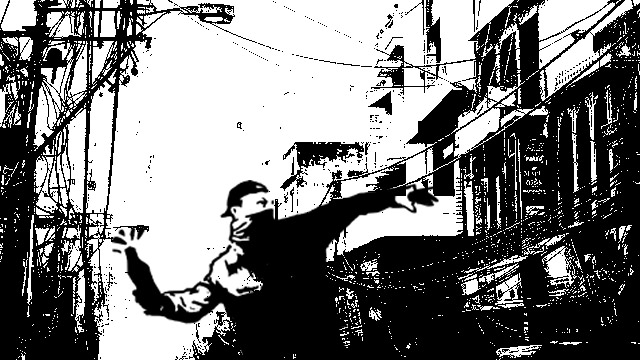 The corporate-controlled mainstream press has been conspicuously silent over the issue of the recent anti-Muslim violence in Madhya Pradesh. A mob of hundreds of feral Hindutva fanatics affiliated with the ruling Bharatiya Janata Party (BJP) and its parent body Rashtriya Swayamsevak Sangh (RSS) vandalised a mosque and attacked the villagers of Gautampura locality of Chandankhedi village near Indore on Tuesday, December 29th 2020. The BJP-RSS goons pelted stones at the villagers, who, upon resisting the aggression, faced the wrath of the state.

Rather than maintaining the law and order situation during the recent anti-Muslim violence in Madhya Pradesh, the police, showing utmost loyalty to the BJP-led government, remained mute spectators and allowed the rumbustious Hindutva thugs to carry out arson. The police later arrested the villagers who tried to resist the mobsters rather than arresting the perpetrators of the crime. No lives were lost in the clashes.

“Twenty-four people, mostly from the village, have been rounded up based on video evidence,” Indore Inspector General of Police Yogesh Deshmukh was quoted by the press. He also said: “There will be more arrests on both sides and people who climbed atop the mosque will be identified and booked under relevant sections.” This “both sides” narrative is carefully planted to persecute the Muslims of the Chandankhedi village despite all evidence pointing towards the Hindutva goons affiliated with the BJP and the RSS.

This incident in Indore is the second recent anti-Muslim violence in Madhya Pradesh. Three days before the Chandankhedi village incident, BJP’s youth-wing activists took out a rally at the Muslim-majority Begum Bagh neighbourhood of Ujjain, chanting anti-Muslim slurs. This led to a protest by the residents to which the BJP men responded with stone-pelting. The stone-pelting by the BJP led to further clashes. But, instead of cracking the whip on the perpetrators, a utopian expectation in Modi-fied India, the Madhya Pradesh Police arrested local Muslims and demolished the house of an accused. Houses of Muslims were demolished in Chandankhedi village as well.

Narottam Mishra, the upper-caste Islamophobic home minister of the state justified the demolition, delivering a quasi-judicial verdict against the accused. Later the government claimed the construction was illegal. However, no notices were served earlier on the same issue to the residents. This “police justice” system, borrowed from Yogi Adityanath-led Uttar Pradesh’s Hindutva fascist regime, is serving the BJP well in Madhya Pradesh.

This recent anti-Muslim violence in Madhya Pradesh is portrayed as “communal clash” by most of the mainstream press. They didn’t show the incident as one that’s pre-planned by the BJP to fuel communal hatred and carry out polarisation at a time when the farmers of all religions, caste groups and regions are opposing Prime Minister Narendra Modi’s farm reforms. The support of these toady media houses is acting as a boon for the Modi regime and the BJP.

It’s evident that the BJP and the RSS, facing a debacle at Delhi due to the obstinate resistance put up by the farmers to Modi’s plan of handing over agriculture to big corporates, will resort to fuelling communal violence by spewing Islamophobia to divert the people’s attention from the epidemically blistering farmers’ protest movement. The recent anti-Muslim violence in Madhya Pradesh is a part of this bigger scheme that’s hatched by the Hindutva fascists. The agrarian states like Haryana, Punjab, and West Bengal, may see sporadic incidents of anti-Muslim violence to evoke communal bestial sentiments of the masses. It’s high time that such attempts are nipped at the bud by building massive people’s movement against the corporate-sponsored Hindutva fascist camp.