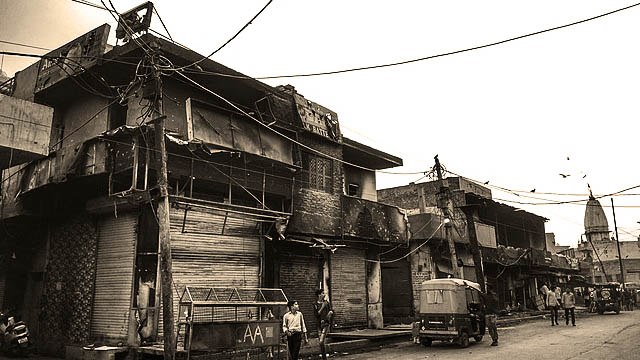 Donald Trump is out of both the White House and Twitter, but the two-storey house in Jaffrabad, which suffered incessant petrol bomb attacks during the 2020 Delhi anti-Muslim pogrom, still stands where it was when the white man was having a grand lunch a few kilometres away. As the first anniversary of the pogrom approaches, the events of the last year should be revisited to understand how the Muslims of India are treated as expendables by the ruling classes and their state machinery.

Mishra threatened the protesters with dire consequences and told the Delhi Police’s Deputy Commissioner of Police (DCP), North-East District, Ved Prakash Surya, who was standing next to him showing obeisance, that he needs the roads vacated within three days.

“They (protesters) want to create trouble in Delhi. That’s why they have closed the roads. That’s why they have created a riot-like situation here. We have not pelted stones. The DCP is standing in front of us and on your behalf, I want to tell him that till the US president (Trump) is in India, we are leaving the area peacefully. After that, we won’t listen to you (police) if the roads are not vacated by then… we will have to take to the streets,” Mishra was seen saying in a video that he posted on micro-blogging site Twitter.

Though Trump has been banned by the social media company forever from its platform, Mishra remains immune from such censorships and is continuing with his regular hatemongering.

The 2020 Delhi anti-Muslim pogrom started from that hour in Maujpur and Jaffrabad area as soon as Mishra was escorted out by his supporters. Stones, bottles and tube lights were pelted at the women protesters and a clash erupted between Muslim men who came to save the women and the stone-pelters sent by the Hindutva fascist camp.

Hundreds, if not thousands, of “outsiders”—freelancer rioters—sourced by the Rashtriya Swayamsevak Sangh (RSS), the parental body of the BJP, rampaged throughout these localities and hunted down any Muslim men they found. Many local escorts, who were deputed by the RSS and the BJP to help the mercenaries identify Muslim houses and properties, helped them nab and kill Muslim men of different localities.

Wherever the Muslims collectively resisted the attack by the Hindutva fascists, the Delhi Police joined the mercenaries to pulverise the resistance. The state, the US president, the RSS and the Hindutva fascist stormtroopers integrated and became identical to one another.

Until now, the real casualty figures of the 2020 Delhi anti-Muslim pogrom isn’t known. The Scroll.in reported quoting a rioter: “The secrets that lay buried in the canal will come out sooner than later. Bloody, there will be so many skeletons that will surface from there”.

According to official estimates, 53 were killed in the Delhi anti-Muslim pogrom, hundreds have been wounded, even fatally, and their sources of livelihood were destroyed. The economic analysis of the Deelhi anti-Muslim pogrom shows that it was directed against the weaker sections. Sexual harassment of Muslim women was rampant.

When the Hindutva fascism-incensed mob was killing hapless Muslims on the roads, fascist storm-troopers were hoisting saffron flags on mosques in Ashok Nagar, houses were burned down and women abused, the Delhi Police was seen exposing its years of pent-up Islamophobia by unleashing targeted violence against the Muslims.

The Delhi Police, alleged rioters, gave them a leeway by not interfering in the massacres and vandalism. All this was happening when Modi was having a gala time with Trump and his family a few kilometres away and the capital city being turned into a fortress.

A Delhi High Court judge, Justice S Muralidhar, was transferred to Punjab and Haryana High Court as soon as he rapped the Delhi Police, the Modi regime and the AAP government of the city-state for not doing enough to curb the violence. The police didn’t sit idle for long though.

Soon after the Delhi anti-Muslim pogrom was over on February 27th 2020, the Delhi Police began arresting Muslim men accusing them of instigating the pogrom against the very community they belong to. The first major victim was Tahir Hussain, the councillor who gave people fleeing the ordeal shelter in the house and ensured that the rioters are resisted to save lives.

Suddenly, Hussain became a much-despised name and the self-certified nationalist media that acts as Modi’s megaphone, jumped into the fray to demonise him. Hussain was thrown out of Arvind Kejriwal’s Aam Aadmi Party (AAP). He is now languishing behind the bars without any chance of coming out.

The Delhi Minorities Commission’s fact-finding report accused the Delhi Police by saying “failure to prevent communal violence was not due to individual or sporadic breaches, but was a pattern of deliberate inaction over several days.”

But the Delhi Police, backed by Modi’s commander-in-chief, Union Home Minister Amit Shah, didn’t bother about allegations. It self-attested its character certificate by rubbishing the criticisms by rights groups. The Delhi Police was rebuked by the Delhi High Court for falsely implicating three Muslim men and then objecting to their bail for months.

While the 17,000-page-long charge sheet, which even exposed the names of witnesses who, the Delhi Police claimed, would require protection, isn’t a final one as per the officials. They claim that the conspiracy isn’t yet “aborted”, hence, they will continue to add new names and imprison anyone who fits the bill. The hollow and farcical charge sheet proves what a shoddy job is done under the garb of investigation.

Leave alone charging the likes of Mishra or other Hindutva fascist rabble-rousers, riot-mongers and the RSS’s men who allegedly planned and executed the pogrom, the Delhi Police even showed the audacity—in its endless manoeuvres to please the Modi regime and the BJP—to issue written orders to provide immunity to the Hindu accused.

In an order signed on July 8th 2020, Special Commissioner of Police (Crime & Economic Offences Wing) Praveer Ranjan cites an “intelligence input” regarding some pogrom-related arrests of “some Hindu youth from Chand Bagh and Khajuri Khas areas of Northeast Delhi.” (sic)

According to an Indian Express report, Ranjan cited the resentment among the Hindu community over the arrest of the accused and asked the police to carefully operate. The order is rooted in the allegations made by “community representatives”, which translates to the Hindutva fascist leaders of the locality belonging to any of the RSS offshoots, including the BJP.

This order has clearly expressed dismay over the fact a few Muslims of the locality weren’t arrested by the Delhi Police. Under the garb of advisory, this order implicitly indicated to the policemen to go slow over the arrest of Hindutva fascists.

Journalists have faced severe hostility from the Hindutva fascists during the violence and it continued even as late as August 2020. While NDTV reporters Arvind Gunasekhar and Saurabh Shukla were beaten until their “Hindu” identity was revealed, JK 24×7 News journalist Akash was shot.

Many other journalists faced attacks and abuse when they went to report from the region. When The Caravan’s photojournalist Shahid Tantray and journalist Prabhjit Singh, along with a woman journalist went to the Subhash Mohalla area to investigate the hoisting of saffron flags near mosques in August 2020, they were physically assaulted by a mob instigated by a BJP leader.

It’s not just the Delhi Police’s complicity with the RSS and the BJP that helped to implement the latter’s 2020 Delhi anti-Muslim pogrom scheme under the cover of “pro-CAA” protests, but it’s also the tactic support extended by the other political players that the massacre could go on.

While the AAP, which swept the 2020 Delhi Assembly elections a few weeks before the pogrom, reducing the BJP to just eight seats, five more than its 2015 tally, not just remained nonchalant towards the agony of the Muslims, it amplified the RSS’s narrative by blaming the Muslims.

The Congress party, which was routed in the assembly elections, didn’t come to the rescue of the Muslims either. Congress party’s leaders like siblings Rahul Gandhi and Priyanka Gandhi Vadra restricted their activities within social-media space. None reached out to the Muslims when they were attacked and butchered.

These betrayals, these acts to reduce the Muslims to their immediate identity and persecute them, may have stirred a storm elsewhere, but it appeased the bloodlust of the Hindutva fascist forces and their servile state machinery, manned by the upper-caste groups in Delhi and elsewhere.

One year of the 2020 Delhi anti-Muslim pogrom didn’t ebb away the trauma caused by it. The wounds of the violence, abuse, police repression and marginalisation remain as fresh as it was in that blood-laced February. It’s only a major democratic transformation, guaranteeing justice, democracy, secularism and equality to the Muslims and other marginalised people, which can help in withering away all traumatic experiences.