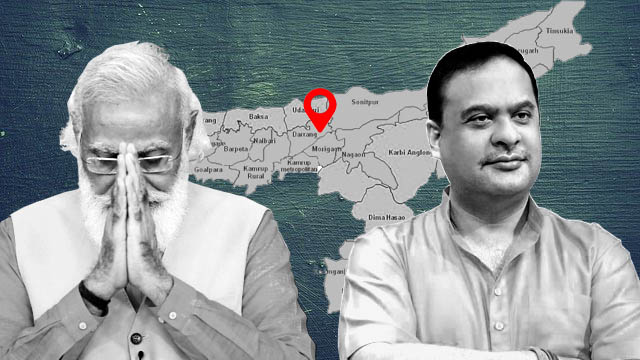 Indian Prime Minister Narendra Modi has reached the US for the United Nations (UN) General Assembly and Quad summit. While India is highlighting the role of state-sponsored terrorism in breeding discrimination against minorities at the UN, accusing neighbour Pakistan without naming it, optics of gory atrocities against minorities in its north-eastern state Assam’s Darrang district shook the conscience of those who still retain it after seven years of Modi’s sclerotic rule.

A video of an eviction drive carried out at Dhalpur 3 area of Sipahjhar revenue circle in Darrang showed armed policemen shooting and then beating a protester to death after he tried to resist the eviction. It’s claimed that the victim’s name is Moinul Haque. Apart from showing the ghastly murder, the video also showed a government photographer—named Bijoy Shankar Boniya—stomping on and punching the dying man in front of the policemen. The police were also seen hitting Haque’s corpse.

The impunity with which the policemen killed Haque, ignoring the filming of their action, their gloating regarding the bestiality shown towards the beleaguered people, exposed how state-sponsored terrorism against the marginalised people is legitimised and patronised under Modi’s Bharatiya Janata Party (BJP) in India. The virulence with which Boniya showered blows on the dying man exemplified the intense xenophobia injected in the veins of Assam by Modi’s Hindutva fascist BJP. The BJP rules Assam since 2016 and has successfully polarised the society using Islamophobia. Recently, in Karnal of BJP-ruled Haryana, the police unleashed macabre atrocities on protesting farmers and a magistrate was seen ordering the police to crack the farmers’ heads. State violence is not just legitimised but it’s made a normal affair in Modi’s India.

According to reports, two other Muslim men of Bengali origin, Saddam Hussain and Sheikh Farid, were killed due to state atrocities during the eviction drive at Dhalpur 3 area, which is one of the four areas targeted by the Government of Assam to oust 800 families from 4,500 bighas of land. Scores of others, including 11 policemen, were injured in the eviction drive on September 26th 2021. Earlier, another tranche of eviction took place, albeit peacefully on September 20th.

The BJP-led government claimed that the families encroached on government land. Playing the communal card, the BJP-led government also claimed that the land belonged to an ancient Shiva temple. As those living on the land, especially at the sandbar, were mostly Muslims, so the issue was easily turned into a communal one and the state atrocities were carried out with a spirit of vengeance. Chief Minister Himanta Biswa Sarma of Modi’s BJP had visited the area in June 2021 and endorsed violence against the so-called ‘encroachers’.

One can link the impunity of the police and Boniya, who double as a BJP worker, with the fact that Darrang’s Superintendent of Police is Sushanta Biswa Sarma, who is also the sibling of the chief minister. Chief Minister Sarma supported the police action, while the Opposition Congress party, the Asom Gana Parishad (AGP) and others criticised the move. Later, Sarma ordered a CID investigation into the incident of the photographer frantically attacking the dead man, while ignoring the fact that the police shot a man armed with a stick at point-blank– a crime the state can’t justify. Driven by sheer hubris, Sarma asserted that the eviction will continue in Dhalpur 1 and Dhalpur 3 on Friday, September 24th, as well.

In Dhalpur 1 and Dhalpur 3, Sarma’s government is looking forward to clear 77,420 bighas of purported government land from habitation. For this thousands of families are being forcefully evicting. The scale of the eviction can only match that of the barbaric Zionist terrorist eviction of Palestinians in the West Bank or other occupied territories. Though the BJP has been claiming that there is a plan to wrest control of the land occupied by “illegal” settlers as it belongs to Shiva temple, the propaganda is a subterfuge. It plans to discombobulate caste Hindu Assamese. The ostensible goal is to clear the land but the real one is something obnoxious.

Sarma is keen to have a corporate-funded agriculture project, which will conform with Modi’s now-stalled anti-farmer farm reforms, in the Gorukhuti village. The Gorukhuti project envisages multi-layer cropping adopting the organic methods and employing the ‘indigenous’ youth. On the one hand, this will be a communally segregated project, where the ruling party will provide opportunities to those loyal to it, and on the other hand, this project will become a pilot one for corporate-controlled farming in Assam.

Therefore, the BJP government formed a ‘Project Gorukhuti’ by taking Sootea legislator Padma Hazarika as its chairman, and Mangaldai parliamentarian Dilip Saikia, legislators Paramananda Rajbongshi of Sipahjhar and Mrinal Saikia of Khumtai as its members.

Hazarika and Dilip Saikia justified the killing of the protesters. All members, except Rajbongshi, have been camping at the site of the Rs 96m project. They said they have no role in the eviction and are only monitoring it. Hazarika, whose position is equal to that of a cabinet rank minister, told the press that 22 tractors will till the land once the eviction is over.

The people who are evicted are neither provided with any alternative shelter nor are given any alternative employment by the BJP government. Amid the COVID-19 pandemic, when millions are reeling under the juggernaut of a severe economic crisis, driving additional few thousand people to destitution is called ‘development’ in BJP-ruled xenophobic Assam. It’s the same with the entire India. No wonder, the people, driven to despair, will resort to all forms of resistance to save their families and themselves from imminent death by starvation.

As Modi will be delivering a speech on India’s greatness, economic development and bash “state-sponsored terrorism” at the UN, the optics of Assam’s Darrang district must counter his assertions. The visuals of the gruesome killing of a protester by the state, the terror unleashed by it, just added one more victim to the millions persecuted, imprisoned, killed and driven to despair by the state for their identity.

From Kashmir to Assam, state-sponsored terror against the marginalised people, the lynching of minorities, destruction of lives and livelihoods are basic tenets of Modi’s rule. At the UN, Modi must be held accountable for turning India into a Rwanda-type state, where majoritarian violence can be sparked anytime to cull the minorities, who are constantly portrayed as enemies—‘termites’, as the Home Minister Amit Shah, Modi’s second-in-command, would say—and vilified in the government’s lapdog media that follows the Radio Rwanda propaganda template.

If Modi is not held accountable for the violence against the minorities, the marginalised and the oppressed, then the international community will expose its utmost hypocrisy, once more, to prove that all that matters to them is ‘free’ access to India’s market, resources and cheap labour. The international community will remain indifferent to the Indian people’s agony. This will certainly bolster the spirit of Modi’s BJP to bring forth more corporate-friendly policies and allow mobsters and state-sponsored mercenaries to massacre the minorities and other marginalised people who dare to resist any injustice.