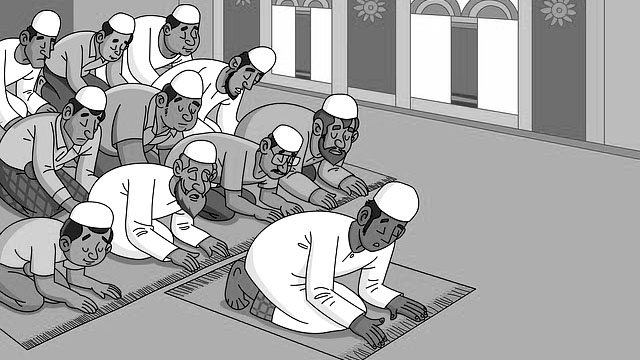 On Friday, November 5th 2021, feral Hindutva fascists assembled at Sector 12 of Gurugram—the satellite township at the southern outskirts of Indian capital New Delhi, still popular by its former name Gurgaon—to forcefully stop Muslims from offering their obligatory weekly namaz (Muslim prayer). This is an outcome of an ongoing dispute over the Friday namaz at open spaces in Gurugram, started by the Hindutva fascist thugs a few years ago.

On November 5th, the Sanyukta Hindu Sangharsh Samiti (SHSS), an umbrella body of 22 rabid Hindutva fascist organisations, including the militant groups like the Vishwa Hindu Parishad (VHP), its youth wing Bajrang Dal, etc, occupied a vacant plot in Sector 12, which is one of the 37 locations identified by the administration for Friday namaz at open spaces in Gurugram.

The SHSS performed Govardhan Puja, a Hindu worship service, at the spot amid the loud chanting of “Jai Shri Ram” (hail Lord Rama)– a war cry of the Hindutva fascists. The Muslims who visit the place on Fridays for their 10-minute-long prayer were shooed away by the rumbustious mob amid heavy police deployment. Several local Muslims refrained from praying at the location to avoid any untoward incident. Prayers took place in the rest 36 locations according to witnesses.

According to the 2011 Census, Gurugram has a population of 1.1m people, with 5% Muslims. For thousands of Muslims, there are only 22 mosques in the town, and some in the outskirts. Moreover, most mosques are located far away from the main business districts where thousands of Muslim workers are employed in different trades.

Due to the lack of mosques, the Muslims have been offering the Friday namaz—to be offered in congregations as per Islamic rules—at vacant plots in different sectors. The Muslims offering the Friday namaz at open spaces in Gurugram and other places has been a banal sight until 2014, when Prime Minister Narendra Modi’s ultra-nationalist, Hindutva fascism-driven Bharatiya Janata Party (BJP) seized power at the Union and in Haryana.

By 2018, the BJP-supported Hindutva fascists started creating ruckus against the Muslims offering the Friday namaz at open spaces in Gurugram. Hindutva fascist mobs will stop the Muslims or shoo them away from different places amid the prayer. To curtail the rights of the Muslims and to appease the upper-caste, elite and middle-class Hindus, the BJP-led Haryana Government designated only 37 sites for Friday namaz in Gurgaon in 2018.

The recent row is over the Muslims offering their Friday namaz at open spaces in Gurugram at those very 37 sites designated by the administration. The SHSS has been vehemently opposing the Muslims worshipping in open spaces. It has been mobilising a large number of upper-caste Hindu elites and middle-class men and women to create nuisance during the Friday prayers. From blowing conch shells to playing loud music, the SHSS does everything it can to disrupt the namaz.

The SHSS appears to be an appendage of the Rashtriya Swayamsevak Sangh (RSS)—the world’s largest armed militant paramilitary force and the parent body of the BJP—deployed to stoke communal tension in Gurugram. Though the BJP or the RSS didn’t openly support the SHSS, their subtle endorsement is quite pronounced.

The SHSS, which calls itself “non-political”, invited BJP leader Kapil Mishra, a rabid Hindutva fascist hatemonger and one of the chief architects of the 2020 Delhi anti-Muslim pogrom, to attend the Govardhan Puja ritual at Sector 12 to terrorise the Muslims. Mishra had spewed his quintessential Islamophobic venom at the occupied site.

“Kapil Mishra is a leader of the Hindus and he fights for the rights of the community. We are an organisation comprising of Hindu outfits, so we have invited him to inspire us for our ongoing struggle. Senior Vishwa Hindu Parishad leader Surendra Jain will also be present,” The Quint news portal quoted Mahavir Bhardwaj, the SHSS Haryana chief.

Bhardwaj had earlier issued a veiled threat to the Muslims if they continue to pray at the open spaces in Gurugram. “We are giving a polite warning. We won’t submit more memorandums. It will then be the responsibility of the administration to maintain peace, not ours. We are ready for lathis (baton charge by the police), we are ready to go to jail… we won’t run if we are shot at, but this will not be tolerated,” The Indian Express had quoted him.

These words and deeds of the SHSS and its leaders follow the template hitherto used by the RSS-affiliated Hindutva fascist outfits throughout the country. The way Bhardwaj issued the veiled threat by using the term “polite warning”, reminds one of Mishra’s infamous prelude to the Delhi anti-Muslim pogrom in February 2020.

Amid the state visit by former US president Donald Trump, Mishra issued a “gentle threat” to the Muslim women protesting against Modi’s contentious citizenship matrix at northeastern Delhi’s Chandbagh area on February 23rd 2020, saying that he and his followers will leave the site but if the protesters don’t leave before Trump’s trip ends, then he will return to forcefully clear the site.

Mishra’s footsoldiers didn’t wait for long, within minutes of his exit they launched a massive attack on the Muslim women and localities, raising slogans like “Jai Shri Ram” and “Har Har Modi”. The handful of Hindutva thugs who assembled at the Govardhan Puja site also didn’t shy from disclosing their long-term goal.

This sloganeering indicated that the SHSS and the Hindutva fascist camp won’t stop with the Govardhan Puja at Sector 12 of Gurugram but will continue to organise such ruckus to ensure that the Muslims can’t offer namaz anywhere in open in Gurugram. This will provide political mileage to Bhardwaj and other Hindutva fascists, increasing their clout in the ruling BJP.

Moreover, historic data shows that the Hindutva fascists have always occupied the lands, which they have purportedly “secured” from “Islamic aggression”. This means the SHSS will feast over the premium real estate pieces in Gurgaon. Under the guise of protecting “Hindu interests” and fighting Muslims, the SHSS will usurp Hindu land with utmost ease.

Mishra’s presence also exemplified the ruling BJP’s endorsement of SHSS-led anti-Muslim vitriolic propaganda. Although Haryana’s Chief Minister Manohar Lal Khattar had earlier condemned the attempts to prohibit the Friday namaz at open spaces in Gurugram, the administration’s inaction in helping the Muslims exhibit the real intention of the dispensation.

Earlier, following the SHSS’s agitation, the Haryana Police had revoked the permission granted to eight of the 37 locations where namaz was allowed. Now, the Haryana Police is mooting the option of revoking permission from all localities if the Hindu “residents” complain against the Muslim congregations. This will create immense trouble for the Muslims who gather to pray for 10-15 minutes at these sites.

Later, when the government allocated 37 designated spaces for the Friday congregation, the Hindutva fascists who masquerade as “concerned residents” started bitterly opposing the new system by citing the “law and order” threat. They alleged that the Friday namaz at open spaces in Gurugram is perilous, as the assembly of so many people threatens the security of the residents. However, none could provide evidence to back their allegation.

Based on this perceived threat, these upper-caste elites and middle-class residents kept their Islamophobic tempo high. When they found that their logic against the Friday namaz at open spaces in Gurugram is falling on its face, they resorted to playing the “secular” card.

These Hindutva fascists claimed that as religion is a personal matter, no community can use public places for worship. They said no community should be allowed to occupy public places for religious purposes. They organised Govardhan Puja at the site of Friday namaz at Sector 12 using the logic of balancing the administration’s bias.

Even though the SHSS wasn’t found opposing the celebration of Durga Puja or Navratri celebration, occupying public spaces for days and nights, it was found opposing the Friday congregations that take between 10 to 15 minutes. From its nomenclature to its use of visceral hatred against the minority community, the SHSS hasn’t shied from exhibiting its “secular” credentials.

Though the RSS and the BJP, through the SHSS, have been trying to use the optics of stopping Muslims from offering the Friday namaz at open spaces in Gurugram as one of Hindu supremacy over Muslims, the underlying reason behind this overtly vitriolic Islamophobic campaign is to polarise the Hindu voters of the town.

The RSS and the BJP have been desperately trying to spark a large-scale communal carnage in Haryana to undo the damage done to its polarisation drive by the ongoing farmers’ movement in the countryside of the agrarian state. As the farmers’ movement against Modi’s pro-corporate farm laws will turn a year old on November 26th, the RSS-BJP is frantically attempting to sabotage it using communal violence.

But the Gurugram experiment failed to provide mileage to the saffron camp vis-à-vis the ongoing farmers’ movement. The farmers have already anticipated the BJP’s nefarious scheme and hence have been chasing the saffron camp’s leaders wherever they are spotted in rural Haryana.

While the BJP’s men stirred trouble in Gurugram, a burgeoning urban centre, over Friday namaz, a large number of farmers took former minister and senior BJP leader Manish Grover and Rohtak Mayor Manmohan Goyal hostage on Friday at a temple in Kaloi village in Haryana’s Rohtak.

The farmers locked the main entrance of the temple in which Grover and Goyal went and cut the electricity from outside when the BJP leaders were watching the live telecast of Modi performing a Hindu religious rite at Kedarnath. The farmers also deflated the tyres of the cars the BJP leaders rode.

It was only after eight-hour-long captivity, Grover and Goyal were allowed to go after they apologised to the villagers for stepping into their village. The BJP leaders purportedly assured that they won’t step into the villages.

The Samyukt Kisan Morcha, the umbrella body of the farmers’ organisations steering the farmers’ movement against Modi’s three contentious farm laws, has called for a boycott of BJP and its allies in Haryana until the laws are repealed and a new law guaranteeing a minimum support price for all crops is enacted.

As the RSS-led Hindutva fascist universe will hype its purported victory in stopping the Friday namaz at open spaces in Gurugram, will gloat over the persecution of Muslims and their dehumanisation, the farmers’ protest and resistance struggle will continue to pulverise the Hindutva fascist camp’s hubris and so-called omnipotence.

As the farmers’ movement alone has the power to change Haryana and influence the rest of India, the RSS-BJP fear its expansion. The desperate attempts by the RSS-BJP to captivate the masses by cracking a whip on the Muslims offering their Friday namaz at open spaces in Gurugram will not save it from an imminent and inevitable fall, which the direction of winds is indicating.