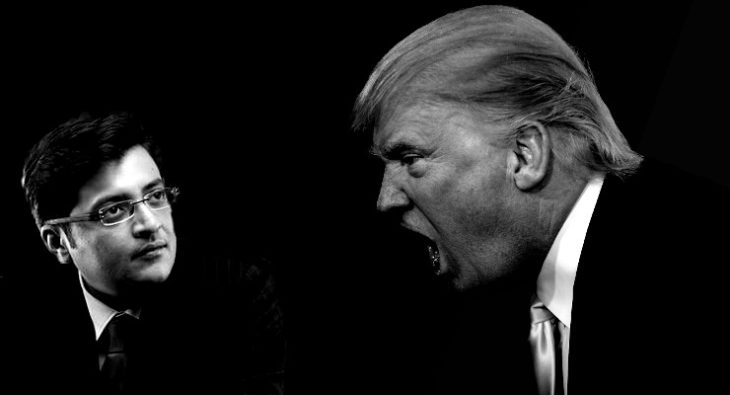 Recently the infamous BJP stooge and former Times Now anchor, Arnab Goswami resurrected at an event in Bengaluru, providing a brief hint about his forthcoming venture called “Republic”, which according to him, will be a global news giant similar to CNN, BBC, Al Jazeera, etc.

Arnab Goswami, according to different news agencies, claimed that his new venture is about “alternative journalism” and he will be fighting against the “decay” of journalistic values in “Lutyens Delhi journalism” using Republic as a media movement.

The critical remarks of Arnab Goswami against the mainstream media of India will go down the garbage drain of history, as Arnab Goswami himself is the ideal illustration of what venality in journalism is in the Modi-fied India.

He along with people like Sudhir Chaudhary, Rajat Sharma, and others shamelessly stooped publicly before the Hindutva chariot and had voluntarily joined the league of Modi sycophants in carrying out saffron propaganda on national television.

Arnab Goswami started his career in journalism with the ABP group’s The Telegraph newspaper, the citadel of right-wing toady journalism, from where people like Kanchan Gupta or Swapan Dasgupta emerged to serve the cause of the Hindutva brigade.

The pugnacious Arnab Goswami was no different, his rants against Muslims, Dalits, tribals on behalf of the big corporate capital and the Hindutva forces, he represented, made him a quite favourite star among the elite Indian upper-caste Hindus, who, alike him, loathe fact based journalism and are more keen to see their version of a story getting narrated as news.

Rather than news analysis or broadcasting, Arnab Goswami only opined and presented his narrow and crooked views on every issue as the only eternal truth while bullying and overlapping anyone in his panel who dared to counter him.

The extreme level of jingoism Arnab Goswami brought on the national television, acting as a boisterous klaxon of the Hindutva brigade, initiated a new low in Indian mainstream corporate media; passing out banal concocted binaries devoid of facts and logics as news, his desperation even brought us close to a purported telephonic discussion, first of its kind, with Dawood Ibrahim hiding in a location known only to Mr Nation Wants to Know.

Different news portals quoted Arnab Goswami as saying that he is against fact-based journalism because then, he thinks, he will be just another Wikipedia. His effort to bring a “revolution” in how media works in India is cheered not by those in the alternative media movement, rather by those who’ve remained eternal fans of the corporate mainstream media and yet alleged that the media is “sold out” on every occasion they saw a news story that goes against their strongly held beliefs.
If Arnab Goswami, the man who used to play the role of the Sangh Parivar mouthpiece every night on his show and shamelessly advocated for gagging the journalists who raise questions on government narratives, is now talking about “saving journalism” from the influence of “Lutyen’s Delhi” then we have to seriously comprehend the underlying threat of his cliché mongering against his parent industry.

If we carefully analyse the new harangue of Arnab Goswami in the light of the international context, we will find him in the league of those newly rising elite journalists who are now firing salvo against the mainstream or established houses of corporate media giants in a bid to synchronise themselves with the rise of a new world order under Donald Trump’s rule.

It’s an undeniable fact that most of the mainstream corporate media houses stood firmly behind the Democrat candidate and former Secretary of State, Hillary Clinton, during her election campaigns. They jointly opposed Donald Trump and kept telling the American people what will be the cons of an administration led by a megalomaniac tyrant like him.

Donald Trump, alike his Indian puppet Arnab Goswami, represents a new power equation in the world, which will favour an entirely different group of corporations than those that the Obama and a possible Clinton administration would have supported.

The corporations that had an upper hand in influencing the day to day government decision making in the US and across the world, will now either lose that place to their rival corporations that support the Trump regime, or they will succumb to the pressure and compromise with their rivals and agree to redistribute the resources under American occupation all over the world among themselves according to new power equations.

The new world order means a close cooperation between Vladimir Putin’s Russia and Donald Trump’s America in dividing the world among themselves with an aim to cut-off China, strangulate anti -US and anti-Israel resistance movements in the Middle East Asia, leaving the Eastern Europe to buckle under a new Tsarist expansionism, and establishing tight control of the US on the economy of the countries of Asia-Africa and South America.

Hindutva groups in India and in the US showed their allegiance to the Trump brigade since a long time and the latter promised them more support in their endeavour of establishing a Hindu Rashtra with Brahminical hegemony in India during his tryst with the Hindutva forces represented by Shalabh Kumar led Republican Hindu Coalition in September 2016.

The Indian corporate media is owned by the Multi-National Corporations of American and Western origin since a long time through a web of their inter-connected decoy Indian firms. These corporate houses, including Arnab’s media alma mater NDTV and Times Now, are vocal advocates of the neo-liberal economic system that the subsequent governments in India has embraced since 1992.

Hindutva fascism in India started growing manifold since the opening up of the Indian economy to the foreign monopoly and finance capital in 1992 and by now they are the single largest feral force that is appearing as
invincible and well funded through a vast network of corporate sponsors throughout the world.
The BJP’s poll fortune is directly proportional to the rise of Islamophobia among the broad masses of Indian people, who mostly live in the countryside where communal harmony has remained strong since years. Through a widespread and state machinery supported network of RSS in the country, the BJP is trying its best to disrupt that communal harmony by spreading bigotry to win its ticket to return to power in 2019.

Though the BJP and the RSS used extreme communal rhetoric to polarise the voters, but the victory of Narendra Modi in 2014 general elections became possible due to the strong anti-incumbency current that went in favour of the BJP.

The Modi government is certain that it cannot replicate 2014 in 2019 due to strong anti-incumbency tides and hence it is imperative for the saffron bloc to play the card of communal polarisation and build up a favourable mass opinion by carrying out a successful perception management with the corporate media doing ventriloquism on its behalf.

The chieftain of India’s contemporary English language toady journalism, Arnab Goswami, is keen to become an éminence grise in helping the BJP sail its boat in the 2019 elections using his media platform Republic, which is funded by those powers that want the burly gadflies in the news studios presenting each issue in communal binaries to the audience.

Arnab Goswami didn’t just come up with the plan to start a major media venture of an international scale overnight, he mentioned this as his dream back in 2012 and it’s his performance as a stooge of the ruling Hindutva brigade (his family is attached with the BJP closely back in Assam and his father even fought an election as a BJP candidate) since the Vajpayee years, when he was compiling a book that advocated harshest punitive measures and state repression on terror supporters (read Muslims), that he managed to secure the trust and funds of the big capitalist sharks [ref]

According to reports published in the Indian Express, the NDA Vice Chairman of Kerala and Rajya Sabha MP from Karnataka, Rajeev Chandrasekhar will be an investor and director in Arnab Goswami’s venture, which will be floated by the ARG Outlier Media Private Limited, a company that is owned by SARG, which is again owned by Arnab Goswami and his wife Samyabrata Ray Goswami. Chandrasekhar is notorious for his fascist views and his media houses, as per the report published in Indian Express, hires editors who’re right-wing and are comfortable to run stories that conform Chandrasekhar’s pro-military and pro-Hindutva views, which are formed due to his close business interests in the defence industry through several of his companies. It’s not a surprise that Chandrasekhar is a member of the Defence Ministry’s Consultative Committee and Parliamentary Standing Committee on Defence. An ideal patriot serving the nation. Link to the Indian Express report is http://indianexpress.com/article/india/nda-mp-rajeev-chandrasekhar-investor-director-in-arnab-goswami-channel/ last accessed on 15th January.[/ref]who are willing to see a Hindutva state formally established in India with the support of a Donald Trump led American government.

It’s an irony that a man who always play the role of the pontiff of the government’s sycophant league and who is infamous for his narcissism and pompous advocacy of tyranny is now bringing a venture that is named “Republic”. An irony just like Donald Trump and his Republican Party represents everything that goes against republican values.

Indian media industry, alike the mainstream media industry across the world, became a docile tool in the hands of the big foreign monopoly and finance capital since years. Batches of reactionary opinionated foot soldiers of capitalism, trained by the US and the UK, started donning the attire of journalists in India, and more than anything, started abusing the very founding principals of journalism for years.

For decades the Indian media, especially the market-oriented English and vernacular press, acted as the lackey of the British colonial masters. Post-1947 they kept acting as government PR agencies and since the dark days of national emergency that was unleashed upon the country by the tyrant Indira Gandhi regime, the mainstream media started crawling before the might of the Indian and foreign big capital and the governments that served the purpose of their investors.

Hindutva fascism evolved as the most dangerous form of political movement and is a peril for the social harmony and unity among the people of the country. As the fascist theory is peddled by the corporate media throughout the country as “patriotism”, the role of toady journalists like Arnab Goswami and his banana Republic becomes important for the ruling forces to drive the nation towards the eternal darkness of corporate plunder and sectarian violence.

How the anti-corporate and anti-establishment journalist sodality will react and resist the attempts made by the resurrected Arnab Goswami to turn the profession of journalism into that of dancing to the tunes of the rulers under the garb of alternative journalism, will shape the future of Indian alternative media movement and its prospect to be victorious against the campaigns of slander, deceit and lies by the mainstream corporate media of which Arnab Goswami and his likes are the brand ambassadors.