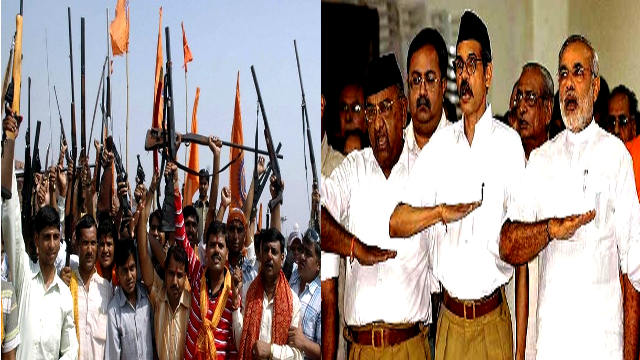 BJP chief of West Bengal and MLA, Dilip Ghosh declared to the media that the BJP support the rally organised by the RSS and the VHP on 5th April in Kolkata on the occasion of Ram Navami, a non-Bengali festival that’s observed in northern and western parts of India. The dangerous part, as reported by the Times of India, is that the rally will be an armed rally, where swords, tridents and other sharp weapons will be brandished by Dilip Ghosh’s hired goons and RSS goons led by Jishnu Bose and Bidyut Mukherjee. The Hindutva extremist Hindu Samhati leader Tapan Ghosh and his stormtroopers may also join the rally called by the VHP and the RSS.

This rally is now vigorously promoted by the Tripura governor cum Hindutva venom spitter Tathagata Roy, who is continuously abusing his constitutional position and the tax payer’s money, to carry out propaganda on behalf of the RSS during his retirement posting in the last bastion of the ailing CPM. “Hindu consciousness in Bengal is a guarantee for the protection of minorities across the border. Bengalis need to put pressure on the Centre on this issue. But I find that Bengalis are least bothered about their brothers across the border,” Tathagata Roy was quoted by the TOI. Roy played a crucial role in pitting the majority Hindu community against the minority community of West Bengal through his ceaseless vitriol against the Muslim community on all media platforms.

The RSS and the VHP recently organised a seminar at the Jadavpur University to protest against the persecution of the minority Hindus in neighbouring Bangladesh. It was an irony to find these organisations of the saffron brigade to amplify their agony on the condition of the minorities in Bangladesh when they are themselves guilty of organising the most grotesque massacre of Muslims and Christians in India.

The RSS and its several official and unofficial affiliates, including partners like the Hindu Mahasabha, VHP and Bajrang Dal collectively massacred thousands of Muslims and Christians, gang-raped hundreds of women, slaughtered children of these communities and burned down entire localities where people of these communities lived. All these were done with the intention of scaring, subjugating and enslaving the people of these communities so that the agenda of establishing a theocratic Brahminical dictatorship is achieved and the Brahminical culture of northern parts of India and the Hindi language can be imposed throughout India.

When such organisations shed crocodile tears for the minorities of the neighbourhood, when they try to organise armed rallies in support of the oppressed minority communities of other countries, then it becomes clear that their intention is to flare up communal riots in West Bengal and has nothing to do with the protection of Bangladeshi Hindus and other minorities from the attacks of Islamist extremists. The Hindutva brigade never dared to venture out to those parts of the world where Islamic fascism has unleashed terror on minority non-Muslim communities, rather they exaggerated stories of such persecutions and milled bush telegraphs to portray the Indian Muslims, especially the Muslim community of West Bengal and other non-BJP ruled states, as villains of similar crimes in India.

The threat to the communal harmony, which underwent severe challenges in West Bengal, where extreme hatred against Muslims is rooted deep within the upper-caste Bhadralok community, seems to be imminent now and may even exceed the levels of the dreadful 1946 communal carnage in the state and displace millions of Muslims. In the above-mentioned report of Times of India, Dilip Ghosh was quoted saying: “Those feeling uneasy with it are free to leave India. Nothing will matter if two to four crore people cross over. You are welcome to move out of India.” It happens to be a sub layered threat to the minority Muslims and secular democratic forces, which is issued as per an integral part of the BJP’s strategy in West Bengal. The plan to displace nearly 30 to 40 million people cannot be a peaceful one and hence points towards a ghastly violence in making, which the state machinery and the saffron brigade has kept under the wraps.

The RSS is adamant to show its strength on the streets of West Bengal and is keen to use weapons to scare the Muslims and the democratic forces. The Ram Navami is an important festival that the BJP wants to introduce in West Bengal by replacing the traditional Bengali festival called Basanti Puja, which is a small variant of the much celebrated Durga Puja of West Bengal that is held every autumn with fanfare. The template of Ram, an Aryan masculine icon worshipped in the north of the country, is now used vigorously to uniformise the Hindu religion and establish the hegemony of the Hindutva doctrine over the followers of the religion all over India.

To counter the monotheist Muslims and their belief system, the RSS is working on the model of monotheism with the VHP and other saffron outfits to bring uniformity in the diverse practices. They have formulated the plan to use the image of Ram to propagate the new version of Hindu religion, which will override all local variants of the religion, which more than 80 per cent of Indians follows. The alien culture of Ram Navami is thus imported from the north by the RSS members, who are fond of Hindi language and the culture associated with it. The RSS is pushing Ram Navami in West Bengal by involving the Brahmin priests of the most prominent temples and mutts in the state; the RSS is trying to have their version of Hindu religion endorsed as the mainstream Hindu religion in the eastern state.

West Bengal is home to a large Muslim population, who form nearly 28 per cent of the total population of the state and have been living in a pathetic condition since decades. Socio-economically the Muslim community is far behind the Hindu community and their backwardness has given rise to the dominance of Salafism in many parts of the state, where Tablighi Jamaat members are inciting the minority Muslims against the majority Hindus and forcing them to adapt the Wahhabi version of Islam, which is quite alien to the Bengali Muslims. At many places in the state, the Tablighi Jamaat and the Hindutva forces are together creating an atmosphere of communal tension, which is leading to large-scale riots.

The ruling TMC is helping both RSS and the Salafists to incite communal riots in the state so that the polarisation of their respective vote banks can be successfully accomplished. Many of the TMC members are also associated with the Hindutva outfits like the Hindu Samhati, VHP, etc. and with Salafist organisations and Jamaats throughout the state. Their support to these fundamentalist forces has left the Brahminical ruling classes happy and the state administration, including the police force, is helping the Hindutva camp to consolidate its base in a state, which was out of the radar of communal politics for decades. There is absolutely no fear of the police or law and order among the RSS led Hindutva camp managed by  Bidyut Mukherjee as they are operating under an immunity cover of the state machinery itself.

Chief Minister Mamata Banerjee is keen to see the BJP as the chief opposition party in the state so that the decay of the parliamentary left in its yesteryear citadel can be projected as the triumph of the right-wing populism, which her party is promoting. The BJP will also benefit with the decay of the ailing CPM-led left-front, as it will provide the saffron party an ideological leverage against the broader left camp in the country, at least in the media space. It will be then able to portray the decadence of the parliamentary left represented by the likes of CPI and CPM as the rot in the communist camp and thereby project itself and fascism as superior ideologies vis-a-vis the “foreign-influenced evil” of Marxism.

An armed rally on Ram Navami in the communally sensitive areas of northern and southern Bengal will definitely give rise to communal tensions as the feral mob of RSS is notorious for vandalising the minority houses, shops, or places of worship during such charged-up rallies organised by the loose cannons. During the Ram Navami armed rally planned by the RSS and the VHP in West Bengal, there may be several attempts made by the goons of the Sangh Parivar to carry out virulent campaigns through different mediums against the Muslim community of the state and create enmity among the Hindus and the Muslims at every place they can lay their hands on.

A supportive state government led by the TMC and its supremo Mamata Banerjee is a morale booster for the RSS led Hindutva camp and therefore, they are now daring to brandish weapons to bully people and carry out vandalism under the protection of the state machinery during the Ram Navami. Dilip Ghosh, who is infamous for his views on women, minority communities, and progressive students, is now using his position as an MLA to do muscle flexing on behalf of the RSS and so predictably he is getting the administration on his side. The constant efforts to wean away Hindu voters using lies and deception by the likes of Dilip Ghosh shows that the experiment that the RSS carried out in Uttar Pradesh since 2013, can be repeated in West Bengal with impunity. The aim is to bag West Bengal in the saffron-India campaign led by Modi and Amit Shah during the 2019 general election and 2021 assembly election.

West Bengal is now quagmire in a deep crisis due to the unholy nexus between Mamata Banerjee-led TMC government and the RSS led Hindutva camp. Narendra Modi and Amit Shah are now determined to overturn the political mandate of the people of West Bengal and establish saffron hegemony in the state using brute force, tridents and swords. The armed rally during the Ram Navami is just a small incident in the web of several severe crimes that the Hindutva fascist forces has planned for West Bengal. The hitherto oasis of communal harmony that existed even though most of the upper-caste Hindus in the state despised the Muslim community and considered them a filth worth purging, is now not only losing that sheen, but also turning into another Uttar Pradesh or Gujarat, states that the upper-caste leftists would have ridiculed as backwards a few years back.

Saving West Bengal from a communal catastrophe, which is now underway due to the proposed armed rally during the Ram Navami celebration by the RSS led Hindutva extremists, is a big challenge for the democratic and progressive forces of the state who are since battling for a just, equal, democratic, and egalitarian society for the Bengali people. The RSS is battle-hardened, therefore, the onus of equal preparations for a successful resistance falls on the progressive and democratic forces. Struggle for land, labour rights and the rights of the people at large, are the spheres where the progressive and democratic forces can carve a niche for itself and establish a strong base at the moment, as only strong struggles against corporate loot and plunder, feudal exploitation, and other oppression on the people can act as strong antidote against the virus of communalism and fundamentalism in West Bengal. It is imperative that these scopes and opportunities are not wasted, but utilised to build up a strong resistance against Hindutva terror in West Bengal from now onwards.