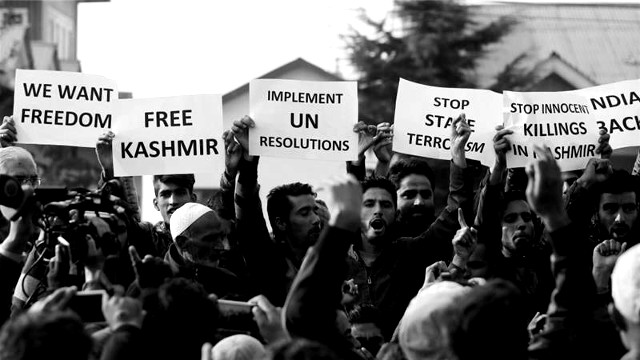 The Indian corporate mainstream media is condemning and mourning the death of a young Rajputana rifle lieutenant, Ummer Fayaz Parry, in South Kashmir, where he was visiting the wedding of his cousin. The lieutenant was gunned down by extremist separatists who were angered by this Kashmir boy’s decision to join the army and the unit infamous in the entire Kashmir valley as a persecutor of the common people and mercenary force of New Delhi.

As there is an undeclared competition raged between the Indian mainstream corporate media houses in proving their nationalist and patriotic credentials since Arnab Goswami returned back to the idiot box using the new platform provided to him by the NDA chairman of Kerala and BJP’s Rajya Sabha MP from Karnataka, Rajeev Chandrashekhar, who happens to be a key player of  the Indian military-industrial complex and is also a member of a crucial defence committee, so no media outlet is letting the story of this brutal murder of a Kashmiri military officer of the Rajputana Rifles to rest easily, unless they serve it on the platter to their subscribers with adequate nationalist, quintessentially Brahminical, spices sprinkled over it.

The corporate media houses, especially those in the electronic media, are trying to outmanoeuvre each other in the game after suffering from the Arnab-Goswami-syndrome. Using their usual cacophony on the Kashmir issue and by abusing those who are struggling in India for the rights of the Kashmiri people, these media outlets and their super-rich anchors, commentators, and columnists kept narrating the details of how Ummer Fayaz Parry was left bullet-ridden by the extremists. But despite providing minute details about how he was bid farewell by his company and a handful of mourners during his funeral or writing eulogies for him, these media outlets refrained from mentioning the facts that led to his unfortunate death in the hands of the extremists.

Forget the dead soldiers for a minute and then if one dares to look at the valley without wearing the spectacles of the occupier or the Brahminical state machinery, then they will find that the entire valley is bullet and pellet ridden and it’s a victim of occupation by a brutal military force that declines to observe even the minimal standards of military operation set by the Geneva Convention and uses indiscriminate killings, sexual violence, barbaric torture and ideological suppression to justify its occupation of Kashmir. The people of Kashmir are not strangers to death and destruction, rather, unlike the people from other parts of the world barring Palestine and Ireland, they have seen a lot of blood and experienced endless horrific atrocities dispensed by the Indian state machinery and its Brahminical masters.

For years Kashmiri parents have lost their children, not just because that they were all demanding Azadi from Indian occupation on the streets, but also because some may have dared to look eyeball-to-eyeball with a soldier from Haryana or some may have stepped out of the house to buy vegetables or medicines and were picked up by the army or the paramilitary and was made a game. There are hundred thousand dead people lying beneath the ground of Kashmir and more than half of them are unnamed, unidentified. The corporate press cannot shed tears for them, cannot question their killers why those people, who were not battling Indian army with guns but were simply passer-bys in Shopian, Kulgam or Baramullah, were picked up without any charge and were never found again, except in some unmarked grave in some hidden graveyards?

The nationalist media is fond of throwing questions to those who will neither be able to answer them upright nor be able to ever know that they are questioned. From their safe havens in Mumbai and New Delhi, the top-notch scribes of Indian corporate media industry questions the Kashmiri people that why don’t they condemn the killing of Lt Ummer Fayaz Parry in the most unequivocal terms as they would condemn the killing of Burhan Wani, one of the militant leaders who had great fan followers? The Kashmiri people would never like to answer the Indian media, as their answers will be blipped and censored, lest people read or hear them, lest people stop believing the story of Kashmir presented in the fashion that suits the Hindutva state’s agenda.

Kashmiri people would have condemned each and every murder and violence throughout the world if they were given a chance to condemn them. They would have condemned the unprovoked killing of numerous civilians, unarmed civilians to be precise, by the Indian paramilitary in 1989 when they were protesting against the rigged election that Indian regime wanted to sweep on their own terms.

But does the corporate media houses have that very leverage to provide the Kashmiri people with an equal opportunity to condemn the savage atrocities committed by the Indian state machine on innocent and often unarmed Kashmiri civilians? Can the common people of Kashmir also be a part of their high-decibel talk shows on Kashmir held in New Delhi or Mumbai? Can the Kashmiri people, or at least their educated and agitated youth, also get a column space in the mainstream press to voice their opinion on the affairs of Kashmir like the pro-Hindutva toady journalists would get?

Even a child who  have understood what is to be said in the classroom and what not, knows, or can use simple common sense to grasp the fact that the Indian corporate controlled, Islamophobic and exclusively Hindutva media would never dare to utter a word against the junta rule, shrouded with the fabric of an utterly sham democracy that they operate under, where military worship is made a hallmark of patriotism and the love for one’s nation is shown by parroting “patriotic” cliches, by standing in the cinema halls when the compulsory national anthem is played and during cricket matches with Pakistan, where Islamophobia rise to the extreme.

As the people of Kashmir are not able to speak out, as they lack a space to condemn all incidents of violence committed against them as well as committed by people who call themselves supporter of an independent Kashmir, therefore, it will be quite ludicrous to ask them to single out only the incident of the brutal murder of Ummer Fayaz Parry and condemn it. With high chances of being called “Pakistani agents”, “paid stone throwers”, and “terrorist sympathisers” the people of Kashmir will not condemn the killing of one individual only and forgetting hundreds of thousands of those who are lying in the unmarked graves of the entire valley. That’s called impartiality if the corporate media has forgotten the term by now.