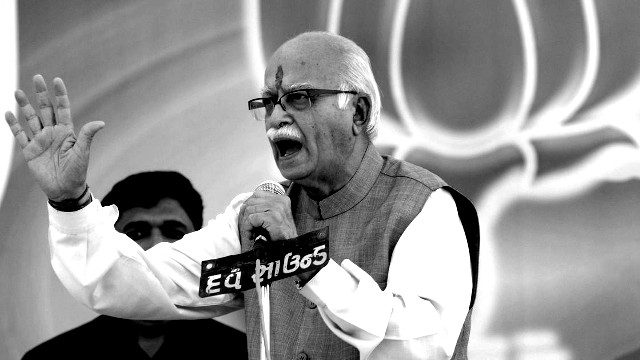 On 19 April, the Supreme Court ordered a trial court in Lucknow to not drop the names of the high-profile accused like Lal Krishna Advani, Murli Manohar Joshi, Union Water Resources Minister Uma Bharti and the Rajasthan Governor Kalyan Singh from the charge sheet that the CBI has filed earlier on the Babri Masjid demolition case. Except for Kalyan Singh, who is provided constitutional immunity during his tenure in the gubernatorial office, the rest will face the trial, which will now be a combined trial of Karsevaks, the footsoldiers of the RSS, and the Hindutva leaders for conspiring to demolish the 15th-century mosque.

There were two parallel cases running on the Babri Masjid demolition in Rae Bareli and Lucknow. While the trial in Lucknow was pending for the ordinary karsevaks, an erstwhile demolition squad hired by the RSS and the VHP, the case in Raebareli had been hearing the case against the Hindutva camp’s leaders like Advani, Joshi, Uma Bharti and others including Vinay Katiyar and Sadhvi Ritambhara, two notorious Hindutva venom spitters. The Supreme Court overturned the verdict of the Allahabad High Court that asked the CBI to drop the names of Advani, Joshi, Uma Bharti and Kalyan Singh, and ordered the merger of two cases into one and its daily hearing in Lucknow. The apex court also ordered the trial court to announce its verdict within two years.

While there had been a jubilant wave flowing among the anti-Hindutva crusaders and liberal secularists over this minimal victory at a time of high tides of Hindutva throughout the country, a close examination of the verdict and the circumstances will narrate a very different story to us.

Why Advani, Joshi, Uma Bharti and other BJP leaders are facing legal hurdles under the reign of Narendra Modi?

There are two reasons for the Narendra Modi government to show reluctance in dropping the names of Advani, Joshi, Bharti and other BJP leaders at a time when the NIA and other agencies are diluting the charges against the RSS terror outfit Abhinav Bharat and its notorious masterminds like Sadhvi Pragya and Aseemanand.

Firstly, the case will run for two years, as per the stipulated time frame specified by the Supreme Court to the trial court in Lucknow. The verdict will come around 2019, which will be again the time for the general election in which Narendra Modi will try to increase his vote share and cast the remnants of the parliamentary opposition to the oblivion.

A favourable verdict for the accused yesteryear leaders of the BJP, which can either be acquittal or dissolution of the grave charges of conspiracy against them will send positive vibes among the RSS and BJP led Hindutva camp throughout the country and will strengthen the demand for the speedy construction of the Ram Temple in Ayodhya at the site of the demolished Babri Masjid.

Also, a judgement that convicts the accused, after two years of long trial, will help Narendra Modi and his RSS backers to showcase these yesteryear Hindutva leaders as martyrs for the “greater Hindu cause” and will be an emotional tug to win polarised Hindu votes in the entire cow-belt and beyond. Though the verdict of the trial court can be overturned by a higher court or the Supreme Court, the fact that the BJP leaders got punished under the law of the land for “standing up for the Hindu cause” will provide enough mileage to the Modi regime in easily sweeping the general election of 2019.

Secondly, by not reigning in the CBI and rather encouraging the highly biased organisation to pursue  the case against Advani and others, Narendra Modi signalled to his former boss and mentor that he and the new generation of RSS leadership is going to clip the wings their wings further and to save themselves from further humiliation in the last years of his life, Advani must give in to the Modi camp and accept its supreme leadership.

Narendra Modi and his coterie will give Advani a chance to take part in the Presidential poll if he gives in to the demands of the Modi camp about shedding his high ambitions and serving the interest of his bitter opponents silently. If Advani gets elected to the top office, he will enjoy legal immunity until his lifetime (he is already 89) and won’t be questioned by the court. The court summoning him as an accused does not erect a barrier for him filing for the presidential race and being elected as the next president will, however, stop the courts from chasing him.

Murli Manohar Joshi, Uma Bharti and Vinay Katiyar will be now left with no other option but to wait and play the victim role in the court case, irrespective of the verdict, and let the RSS use their “victimhood” to fan the communal passion among the Hindu voters throughout the country to gain popular mandate for the BJP in the 2019 general election and other state assembly polls. They will play their role quite obstinately to make sure their ideology triumphs and the corporate-landlord-Hindutva fascist nexus rules India for all the time to come.

No courts in India had ever punished the powerful and the rich for the crimes they have committed and even if the lower courts showed the bars to such privileged culprits, the verdicts were overturned by the higher courts and the mighty people remained omnipotent in the corporate controlled political sphere. When Advani was earlier arrested after the Babri Masjid demolition, he was given a VIP treatment and was kept at a Mehrauli guest house by P.V. Narasimha Rao. It was a good time as there was no trial and no Ujjal Nikam type prosecutors trying to whip a nation’s slumbered “patriotism” by questioning the special treatment offered to those whose actions terrorised the lives of millions for decades.

It is highly doubtful that the present case, based on the Justice Manmohan Singh Liberhan Commission’s findings after the Babri Masjid demolition, will be strongly built by the prosecution to ensure punishment for the culprits in the capital city of Yogi Adityanath ruled Uttar Pradesh, and even if it does, there are high chances of such a controversial verdict getting overturned or the culprits getting bail at the higher echelons of the judicial system. At the end of the day, the Modi government is allowing the CBI to proceed with this 25-year-old affair only after it became sure that no tangible damage will be caused by the case and it can be used to gain further political mileage in the coming years.

The happiness of the libertarians and the self-styled champions of secularism on this verdict and prosecution order by the apex court is bound to deceive them and will live for a shorter period to their surprise. It is imperative that these so-called liberals, who would nod to accept the views of the likes of Vajpayee, must stop fooling themselves and the people by calling their pacifist and non-existing resistance against the Hindutva brigade as the only way to reach an egalitarian society. The rumblings of the puritan centrist and rightist liberals, who are fast turning into dinosaurs in Indian politics, over the legal summon at Advani’s doorstep, will never cast any shadow of worry on the Modi regime.

To prevent the Modi regime from going its way to use Advani, Joshi, Bharti and others as scapegoats to reach its political goal, the initiative must begin from the grassroots of anti-feudal and anti-corporate political struggle that must aim to liberate India and its people from the yoke of a corporate-feudal nexus that is buttressed by the mighty corporations of Wall Street. It is in this very nexus that the Hindutva Inc. has its heart, the very machine that is pumping blood through its veins and empowering it to cause divisions within the Indian people each moment. It is time to defeat this machinery, without being deceived by the hokum staged by the liberals.