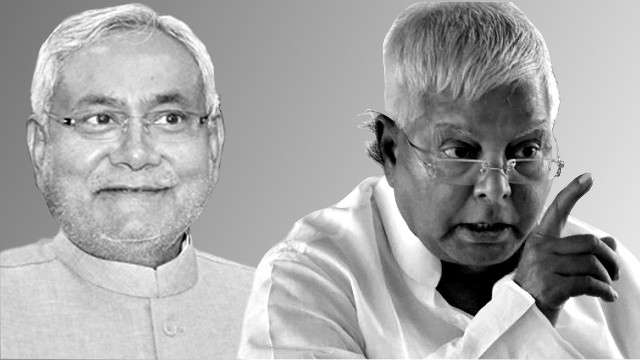 The recent somersault in the politics of Bihar, following Nitish Kumar’s sudden return to the BJP’s lap, caused an upheaval throughout the country, forcing the mainstream media to junk every other news and stories to spend time in decoding the cryptic political back-channel processes that opened the doors to the former NDA ally and a close aide of the Bihar BJP to return back to the fold of the RSS-led Hindutva camp, which he opposed for four years in a row. Indeed a truly authentic “Ghar Wapsi” by Nitish Kumar.

Nitish Kumar was the ideal – leader with a secular credential – whom the parliamentary opposition bloc, including the Congress and Kumar’s bete noire Lalu Prasad Yadav, considered as a principal ally in their electoral arithmetical struggle against the Modi government and the BJP’s unstoppable march to power throughout the country. By duping his “Maha Gath Bandhan” or Grand Alliance partners, Nitish Kumar proved that his allegiance, alike his former and present political allies, remains only with the axis of power and the house that can offer him political security during rainy days.

The joining of hands by bitter foes like Lalu Prasad Yadav and Nitish Kumar in 2015, and the subsequent support by the Congress Party to them, was showcased by the corporate-controlled mainstream media as a model that must be replicated throughout the country by the opposition, should they want to stop the juggernaut of the RSS and the BJP which is engulfing the whole country with an unstoppable zeal.

However, much to their dismay, Nitish Kumar’s volte-face in mid-2017 showed the inherent bankruptcy of the parliamentary parties of all hues who talk about forging a purely electoral alliance that will bring the colossal Hindutva empire of Narendra Modi in 2019. Nitish Kumar’s partner-swapping at the flash of eyes showed that the claim of battling the Hindutva fascist menace by the entire parliamentary opposition camp is as dubious as the “secular” and “democratic” credentials of people like Nitish Kumar and Mamata Banerjee.

It was in 1996, four years after the BJP and the RSS-led Hindutva thugs demolished the Babri Masjid in Ayodhya and unleashed the most grotesque wave of communal riots throughout the country, unmatched in magnitude and in the gory incidents of violence the country experienced since the partition, that Nitish Kumar and George Fernandez-led Samta Party forged an electoral alliance with the BJP to take on the Congress in the election. The communal tonality of the BJP was then already at its peak and these credentials of the saffron camp didn’t stir the overtly sensitive “secular conscience” of Nitish Kumar when he clasped palms with the Vajpayee-Advani camp.

When the 2002 anti-Muslim pogrom was orchestrated in Gujarat under Narendra Modi’s patronage, Nitish Kumar remained comfortable in the Vajpayee-led union cabinet and didn’t felt the compulsion of his conscience to quit the government, alike his then-colleague Mamata Banerjee. It was rather in 2003 that as a Railway Minister of Vajpayee’s cabinet, Nitish Kumar praised “Narendrabhai” during a programme of the railways and welcomed him to play a greater role on the national stage.

After forming the JD (U), when the Sharad Yadav-led camp of the Janta Dal decided to switch allegiance to the BJP, Nitish Kumar remained aligned with the saffron camp and allowed the Sangh Parivar to grow strong in the feudal heartland of Bihar and helped the Hindutva fascists to unite a large-section of the Mahadalits, backward castes, Kurmis and other sections of the Hindus under its notorious umbrella and intensify communal propaganda throughout the state.

The JD(U) and BJP alliance in Bihar ruled the state for nearly eight years continuously from 2005-2013 and Nitish Kumar only heard the call of his “secular conscience” nearly after 17 years of forming an alliance with the BJP in 2013, when the BJP declared that Narendra Modi will be its prime ministerial candidate in the 2014 general election. It was the time when the anti-incumbency waves were at its peak against the JD(U)-BJP coalition government and Nitish Kumar tried to pass the buck on the BJP to save his own skin and subsequently suffered a humiliating defeat in the Lok Sabha election of 2014 due to rise in anti-incumbency votes.

Nitish Kumar’s conscience ordered him to resign from the position of Chief Minister after the tragic defeat of the JD(U) in the Lok Sabha poll of 2014. The Mahadalit candidate Jiten Ram Manjhi was made the interim and puppet Chief Minister by the JD (U), however, when the latter started aspiring for more power, Nitish Kumar’s conscience forced him to return back and attempt to clip the wings of Manjhi. This attempt to regain power by Nitish Kumar caused the fissure in the JD (U) to appear in public and the BJP started poaching the leaders of the party for the 2015 Bihar assembly election.

It was the call of his “secular conscience” that Nitish Kumar said he will consume the poison (i.e. unity with Lalu Prasad Yadav) to ensure that the BJP’s toxic agenda gets no room in Bihar. After the split of Manjhi’s camp and the assertion of strength by the BJP, which accumulated the support of Manjhi, Lok Janshakti Party leader Ram Vilas Paswan, defected RJD leader Pappu Yadav and others, to increase its support base in Bihar, the JD (U) and Nitish Kumar was left with no choices but to form an alliance with Lalu Prasad Yadav, his longtime foe, and the Congress Party, against which he and his party took a standpoint since the inception of their political career.

As this opportunistically cobbled front managed to secure the majority in the legislative assembly and as the people of Bihar strongly opposed the juggernaut of the Hindutva fascists, the victory against the BJP became easy and with the support of Lalu Prasad Yadav, Nitish Kumar again became the chief minister of Bihar, one of the most poverty-clad states of India.

Such instances are evidence of how strongly the “conscience” of Nitish Kumar drives him to the safe quarters of power and keeps his much flaunted – “socialist ideology” -subservient to the principal cause of seizing power or to seek a share of it from those who hold it or are in a favourable position to seize it.

The return of the “conscience” that has now compelled Nitish Kumar to become the appendage of the BJP was called by the insecurity that was gripping Nitish Kumar ever since he formed the alliance with his bete noire Lalu Prasad Yadav with the support of the dying Congress Party. Nitish Kumar’s personal political ambitions were not finding any avenue to reach a secure parking within this framework of “Maha Gath Bandhan” and through his tactical support to Modi’s demonetisation exercise and his party’s support to the RSS candidate Ramnath Kovind for the presidential position, a channel of communication was opened by Nitish Kumar to pave his way back to the saffron clique’s embrace.

As the talk about electoral alliances between the anti-BJP parties on a national scale makes the round at present, which aims to bring down the Hindutva empire erected by Narendra Modi, instances of Nitish Kumar’s volte-face, the switching of allegiance by different regional parties in favour of the BJP, the immense horse trading following the Rajya Sabha election in Gujarat, the formation of BJP governments in Goa and Manipur despite the opposition winning there, shows that how hollow is the idea of forming a loosely-held opportunist united front of the parliamentary parties and expect it to stop the fascist convoy from reaching its goal.

There cannot be an antidote to the venom spit by the BJP in the opportunist political alliances that are formed by the most notorious and unscrupulous political gymnasts. Corrupt and dynastic politicians cannot gain the trust of the voters and the people involved in the struggle against communal fascist forces throughout India; rather the unity of these utmost corrupt politicians will give excessive mileage to the BJP and the RSS, which will milk the situation and win massive victory in the forthcoming elections at provincial and national level, as it did in the Uttar Pradesh assembly election a few months ago.

The only thing that has the potential to thwart the communal bandwagon of the RSS, the only political strategy that can certainly call an end to the Modi regime and the saffron-fascist rule in different provinces and bring forth a real and substantial change in the lives of the people of the country is a broad people’s movement.

A people’s democratic movement that will be able to unite the various struggles and movements of the workers, farmers, tribal people, Dalits, women, minority communities and oppressed nationalities against the nasty oppression and exploitation laden on them by the big corporate houses, feudal landlords and crony capitalists, all of whom are represented by the BJP and the RSS in the political arena.

Only an alliance of the overwhelming masses of working people against the neo-liberal, pro-corporate and utmost feudal-dependent system, backed with large-scale political movements can truly bring the necessary changes in the political and economic areas of this country and purge the filth of Hindutva fascism and Brahminical tyranny by ending the reign of semi-feudal production relation and neo-liberal economic oppression, which pushes the majority of the people to utmost despair and destitution by fuelling uncontrollable flames of economic crisis.

Only when such a movement will be initiated by combining various struggles waged by the Indian people and given a proper shape to curtail the factors – socio-economic and political, which leads to the victory of the RSS-led Hindutva camp, then only the future prospect of the Hindutva brigade and Narendra Modi can be certainly doomed.

Even if the likes of Nitish Kumar forge a close alliance with the likes of Lalu Prasad Yadav numerous times in the future, they will certainly fail to give the much-required fillip to the anti-Hindutva fascist movement, because the people will not be ready to make themselves scapegoats for corrupt and unscrupulous politicians. India needs the people, the working people to be specific, to take up their fate in their own hands and bring forth the true change to the political system of the country by booting out the opportunists like Nitish Kumar, Lalu Prasad Yadav and the fascist BJP and the RSS.