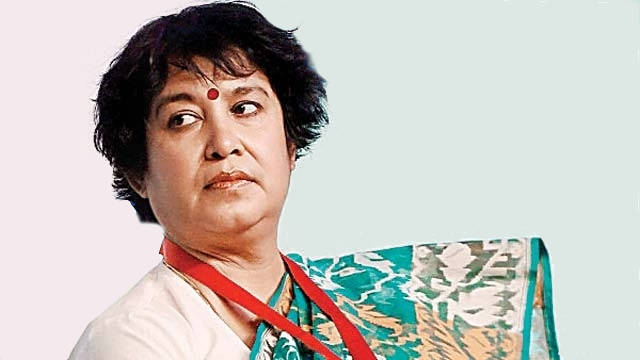 Exiled Bangladeshi author, Taslima Nasreen exposed her hypocrisy more than once when it came to condemning Hindutva terror, which is slaughtering the minority community members and those who are expressing their dissent against the Modi regime of India. Ventriloquising on behalf of the RSS-led Sangh Parivar, the Modi government and all Hindutva venom spitters, Taslima Nasreen did speak a word or two against the communal fascist violence meted out to subjugate the minority Muslims and Christians, in a moderate tone, but she did add to it the cliche of “Islamic terror” to drive home the point that she is moaning since ages – the Muslims are “inherently” terrorist.

Recently, while condemning the brutal murder of Gauri Lankesh, the firebrand journalist whose razor-sharp criticism actually bruised the ruling Sangh Parivar, Taslima Nasreen said in a Facebook post that though the world knew the Hindu religion as a “peace-loving” and embracing religion, the recent incidents are proving otherwise. While saying this, Taslima added the question of how many intellectuals would have hit the streets if a writer is killed by Islamist fascists for similar reasons? She said that sadly no one will hit the streets because according to her people don’t want to embarrass the Islamist fascists.

Taslima Nasreen tries to prove herself as a subject matter expert on religions, religious fundamentalism and their history, however, her ignorance in this case about the history of the Hindu religion in India, which had a similar brutal and savage history like that of Islam, is something she ignores upright, probably to not cause much embarrassment to the BJP and the RSS, who are sponsoring and patronising her visits to India and going to grant her Indian citizenship soon, as she falls in the same league of Islam-bashing pseudo-intellectual supporters of the Hindutva fascist kingdom like the Pakistani-Canadian Mossad agent Tarek Fatah and Tufail Ahmed.

Probably Taslima Nasreen would say that she doesn’t know what is caste apartheid in the Hindu society and how it’s prevailing even to this date with full vigour and killing scores of people, raping women and usurping the fruits of labour of others under a “sacred” privilege that only a handful people enjoys in the society due to their birth. Probably, while she was portraying the Hindu society as an ever embracing and liberal society, she never heard the name of Dr BR Ambedkar, Jyotirbha and Savitri Bai Phule, or probably she doesn’t know anything about the tribal people’s subaltern history that contradicts the Brahminical and white man’s supremacist history in the Indian subcontinent. Probably she never read about how the Hindutva mob, patronised by the Brahminical Indian state machine, massacred Muslim men, gang-raped Muslim women before killing them, tore the womb of the pregnant victims and then forked out the foetus and burned them to stop the “breeding” of Muslims in Gujarat and Muzaffarnagar of Uttar Pradesh. Probably she missed a lot of news over years, or probably she deliberately overlooked them as they contradict her outlook and her narratives.

While saying that, if we look at her allegation that the intellectuals, or to be precise the anti-Hindutva and anti-fascist writers, journalists and other intellectuals of India, remaining mum on the persecution or murder of intellectuals by the Islamist fascists, then she should tell us, who was such a journalist and firebrand anti-establishment critic in India who was killed by Islamist fundamentalists? The problem of Islamist fundamentalism exerting considerable political influence only exists in few states of India like Andhra Pradesh, Kerala, Telangana, Karnataka and West Bengal. Even in these states, Islamist fascism is a minority fascist ideology and is subservient to the majoritarian fascism, it works as a subterfuge to gear up the virulence that the Hindutva fascists use to polarise the Hindus by inciting Islamophobia.

Who were the journalists, activists and rationalist writers of India who are since killed by Islamist fascists in India with full state-support? Can she show us an example of Indian state’s complicity in a crime committed by the Indian Islamist fascists? Maybe she should be loudly told that even the simple identity of being born as a Muslim can land up any Indian citizen in jail on cooked up terror charges, only to be released by a court after a decade when the state-machine will be unable to prove their involvement in the crime they were locked up for. This is not before the character assassination of those hapless Muslim victims by the corporate-controlled mainstream media and vitriol is spread against the entire community, which, according to the Sachar Committee report-since removed from the government’s portal, is living in a very miserable socio-economic condition in India due to the systematic apartheid that they are subjected to since last seven decades.

Can a poor, uneducated, socio-politically handicapped community’s fundamentalist force afford an independent fascist policy, except for serving the interests of the majoritarian fascist ideology, in a country where they are persecuted for their identity? No, they can’t and hence they have not killed anti-establishment writers, authors, and critical thinkers. They even didn’t kill the regime’s hired intellectuals spewing venom against Islam and its followers to score points. It’s not that the Islamist fascists can’t kill, but in the condition prevailing in India since 1947, they would not dare to act independently, unless the Hindutva fascists promise and extend their support to such violence.

Though the Indian left-wing and democratic forces have protested and condemned the murder of free thinkers by Islamist fascists, be it the killing of bloggers in Bangladesh, the killing of cartoonists in France, or the curtailing of the dissenting voices in the US neo-colonies like Saudi Arabia or Pakistan, in the strongest terms, the likes of Taslima Nasreen and other Muslim-bashing intellectuals chose to not see them. When did she see the double standard? If she is talking about her own persecution, it was the same progressive and democratic voices who were fighting against her exile, the ban imposed on her books by the West Bengal government, against the Islamist fascists like Nur Barkati, Siddiqullah Chaudhary or the AIMIM leader of Aurangabad bullying her. It’s her extreme bigotry that makes her overlook them and instead demand the condemnation of Muslims in a country where they face discrimination since birth.

In a world, where one community is strong and strong enough to persecute and exploit another community, there, in that very world, secularism doesn’t means merely remaining militantly neutral and balancing the needle of condemnation, rather secularism in such a society will mean being on the side of the exploited and persecuted community, to support the latter in winning their rights and live with dignity and in peace. It’s the same reason that makes the progressive and democratic voices, all over the world, support the cause of the Muslims, mind it the Muslims and not the Salafist hate-mongers, in the US, in Europe, in Asia and everywhere else, because it’s the Muslims, who are the most persecuted and oppressed community in the modern world.

Except for the US controlled Saudi Arabia, Jordan, Qatar, etc., Muslims living elsewhere are facing the wrath of the US and its allies and getting killed in numbers that far surpass the victims of Islamist fascism in countries like Pakistan, Bangladesh, etc. Even Islamist fascism derives support from the very Salafist network that is funded and nurtured by the US and the West. They work as a docile tool for the US and the Western corporations in expanding their mission of global loot, plunder and hegemony seeking by sinking one of the largest exploited community into the murky mire of religious fundamentalism and thereby keep the exploitative system, especially that sucks the oil and energy resources out of the Gulf to feed the ever-growing businesses of the West, immune from the threat of people’s rebellion and far worse, a socialist revolution.

In such a state, surrounded by a world, where they are persecuted for their identity, Muslims will certainly get close to their religious scriptures and practices to show their dissent with what’s called mainstream and order. The topping of Salafist fundamentalism added by the US and its allies to ensure the dissenting Muslims doesn’t seek any theoretical advice from the banned ideologies of the left and progressive forces, like they did in the 1950-60s and created a new wave of resistance in the Arab world and elsewhere, rather remains confined within the medieval outdated ideology propelled by the fundamentalists. However, remaining loyal to her American and Western handlers, Taslima Nasreen and her ilk will refrain from exposing this global conspiracy of the US and the West, their big corporations and media outlets, but for few pieces of silver and cheap publicity they will blame the Muslims, the hapless poor and destitute Muslims and anyone else fighting for the cause of the marginalised people in India and elsewhere.

Taslima Nasreen’s recent criticism of Muslims and democratic forces over the killing of Gauri Lankesh, or her shrilling comparison between her own persecution in Bangladesh and the genocide and the plight of the beleaguered Rohingya Muslims, shows the nadir she and her cohorts have stooped to, in order to simply remain relevant and exist in public discourse. Taslima Nasreen has exposed truly that she and her ilk are just another bunches of hypocrite Hindutva fanatics, who are hired specifically by the international monopoly and finance capital to hound and bad mouth a persecuted community, whose members are slaughtered around the whole world. It’s not good to call her Islamophobic, but an anti-Muslim fascist masqueraded as a liberal democrat.