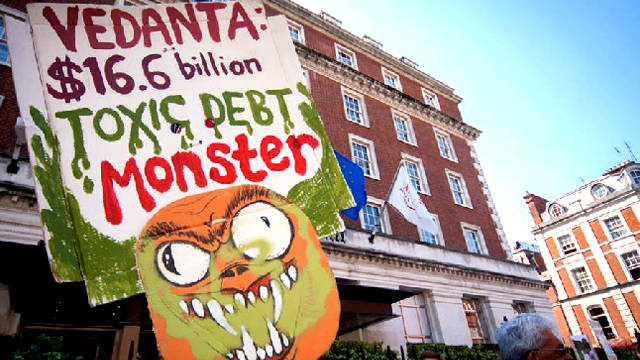 The AIADMK is paying the price of its pro-Hindutva and pro-Hindi stance more than ever since it carried out the brutal massacre of 13 protesters in Thoothukudi, shot by the Tamil Nadu Police’s snipers, trained by the Zionist Israeli regime. While the police and the district collector, obeying the order of the AIADMK’s ruling E. Palaniswamy and O. Panneerselvam faction, opened fire upon the protesters agitating against the illegal expansion of the Sterlite Copper plant in the coastal town, which has already jeopardised the environment and caused severe damage to the ecosystem, affecting the lives and livelihood of the local people, especially the fishermen, they didn’t realise that their adventurism and overt display of loyalty towards their corporate masters would turn the tide against them.

One of the biggest foreign fundraiser and lobbyist of the Modi government and its Hindutva enterprise, British mining tycoon Anil Agarwal and the Vedanta Resources owned by him, always played a notorious role in evicting people from their land, forests and then pollute the environment through its environment-hostile mining and smelting operation. The crimes of Vedanta Resources throughout the world can be found listed here. The Vedanta Resources have most of the major parliamentary parties of India in its payroll and hence, there is no visible difference between the approach of the Congress-led UPA I and II regime or the Modi regime regarding the brutal aggression of this greedy mining giant on the land and forests of the tribal people of Odisha, Chhattisgarh or the Tamil people in Thoothukudi.

When P. Chidambaram, the former Home Minister of the UPA II regime and a former advocate of big mining corporations, started the largest war of the Indian state against the tribal people of Central and Eastern India, then he clearly had Vedanta’s interests also on the mind. How he couldn’t when he served as a non-executive director on the board of Vedanta and resigned a day before he was to become India’s finance minister in 2004?

Chidambaram, the Tamil politician who switched allegiance to Congress as per his convenience, a staunch Hindutva fascist and a paid lap-dancer of big corporate capital, whose son is an accused in corruption cases, is also notorious for helping Anil Agarwal’s Sterlite. The same Sterlite that’s at the receiving end in Tamil Nadu, had a lot of favours pouring in from Chidambaram. The former finance minister once cleared the Foreign Direct Investment into Sterlite by the Mauritius-based Twinstar Holdings and helped Anil Agarwal to buy stakes of Sesa Goa through his flip-flop in imposing an export duty. Mr Chidambaram first imposed a hefty ₹300 per tonne export duty on iron ore, which considerably lowered the share prices of Sesa Goa and helped Vedanta acquire majority stakes at a lower price. Once Vedanta acquired the company, Chidambaram suddenly lowered the duty to ₹50 per tonne by doing a volte-face.

The BJP has a close tie-up with the utmost Brahmanical Anil Agarwal-led Vedanta group. It’s said that Atal Bihari Vajpayee-led NDA government took the decision to carve out a separate state for the tribal people from Madhya Pradesh in a haste so that the mining giants can sign fast-track Memorandum of Understandings with the new state’s government and get their stake of the rich mineral resources beneath the forests of the state. It was then that BALCO, a public sector unit (PSU), was privatised. Vedanta bought the PSU through Sterlite, buying 51 per cent of the stakes for ₹551 crore. It was the first ever large PSU disinvestment and faced stiff resistance from the trade unions.

Since then, Sterlite has been mining more than 500,000 metric tonnes of bauxite from Mainpat of Chhattisgarh and from Kabirdham it excavates 300,000 metric tonnes every year, grossly neglecting environmental norms. The BJP has initiated the anti-tribal Salwa Judum movement and the war against the tribal people of Bastar and entire South Chhattisgarh, following the formation of the Raman Singh-led government in 2005. The Congress unofficially supported the BJP government in Chhattisgarh in spreading its Hindutva-fascist terror throughout the state, and the party also played a key role in consolidating the Salwa Judum movement. Vedanta was allegedly financing the brutal war against the tribal people who didn’t allow it to simply annex their land, forests and pollute their rivers.

In Odisha, the BJP and the BJD coalition helped the Vedanta to encroach upon the Niyamgiri Hills, home to the ancient Dongria Kondh tribe, who have been resisting the aggression on the land they consider holy and have been facing the wrath of state violence: brutal killings, imprisonment and rapes by the paramilitary and police force. Though the Dongria Kondh tribe stopped the Vedanta aggression by winning a court case, still the mining giant is continuously trying to have the verdict overturned and seize the Niyamgiri Hills by force to mine bauxite from beneath the land. This desperation shown by Vedanta has allowed the state government and the Modi regime to collectively continue the persecution of the Dongria Kondh tribe even though the BJP isn’t in the coalition with the BJD anymore.

Narendra Modi always finds a great supporter in Vedanta Resources, which publishes newspaper advertisements welcoming him to Britain, whose top management hires lobbyists to ensure Modi finds acceptance in British business circles. Anil Agarwal walks with him to India-UK CEO summit, meets Theresa May, while the British Tamils protest against the environmental damage done at Thoothukudi by Sterlite outside Agarwal’s mansion. Vedanta Resources even supports the Swachh Bharat campaign, which gives the mining corporation an opportunity to earn from real estate projects and do money laundering. The Modi regime has relaxed the legal hurdles for the nefarious practices of the Vedanta Resources, helping it to plunder India’s mineral and labour resources in lieu of a little breadcrumb thrown by the Agarwal’s to the coffer of the RSS and its leaders. The $11.5 billion revenue that the company earned in FY 2017 gives it enough room to manoeuvre by purchasing politicians, bureaucrats, policemen and other decision makers.

Leaving no stone unturned in the competition with Modi’s favourite acolyte, Gautam Adani over the acquisition of mines, Vedanta chief Anil Agarwal is continuously bidding for more access to India’s natural resources, which his British firm is eager to plunder by exploiting the Indian labour and by evicting, killing, maiming the tribal people, beneath whose land the resources lie. The Modi government’s relaxation of rules to broaden corporate loot, the slow dissolution of all norms and checks required for mining, the relaxation offered in the labour law, etc. combines together to make Vedanta and other plunderers like it, happy with the regime.

The close tie-up between the Modi government and the Vedanta Resources, with the latter extending its influence on almost all major political parties and governments of the country, with the bureaucracy and almost the entire state apparatus working on behalf of corporations, it’s not a big deal for the Vedanta to survive few months’ minimal loss due to the closure of the Sterlite Copper plant in Thoothukudi. It’s known to the cunning mining barons, the emperors of the imperialist world order, that such cosmetic shows are necessary at times to quell the public anger, when the political stakes are high, especially in a year before a crucial election. The British mining giant’s management knows that Narendra Modi’s government will definitely help them in reopening their operation in Thoothukudi and siphon-off more profit from India than ever before due to the sweet relationship the two entities enjoy.

When initiating any political movement against a government or the opposition, our parliamentary parties, irrespective of their hue or affiliation, tries to delink each political entity from the big foreign corporations and their comprador Indian allies whom such parties serve. The common people, especially the working class, the peasantry, the fishermen, the toiled people, the students, youth and women, who are fighting against the tyrannical rule of Sterlite, the Hindutva fascist Modi government and its lackey AIADMK-led Tamil Nadu government, must be shown that behind the veil of these political parties and factories there lies the dirty system of finance capital, which is ruling the globe now and their struggle against their local enemies cannot achieve success in isolation, rather can only achieve victory when it target the powers that finance and strengthen these local forces, who in turn kill innocent people.

The bigger struggle against Hindutva fascism and its efforts to sell-off India, its land, resources, water and labour at a throw-away price to the big foreign corporations and their Indian comprador allies, cannot achieve an iota of success unless it also fights against the major fundraisers of the Hindutva fascist forces – namely the feudal landlords, the comprador capitalists and their foreign masters. To certainly defeat and eliminate the menace of Hindutva fascism from India, it’s imperative that the real allies are united against the real foes so that the struggle can be decisive. Modi’s India is Vedanta’s India, unless the people of India fight back to reclaim their rights on the land, the air, the water and the country as a whole. Tamil Nadu certainly shows the way today towards the greater goal and success can be achieved by the people when all small struggles can be threaded together to form a massive one.