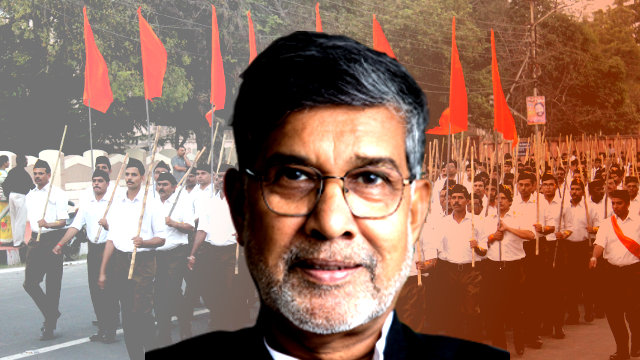 When Nobel laureate Kailash Satyarthi delivered a speech on the occasion of Vijayadashami at the RSS headquarters on 18 October, urging the RSS Shakhas to work as a firewall against child trafficking, especially the trafficking of the girl child, he created an uproar in the opposition camp. The opponents of the Modi regime and the Hindutva fascist politics propagated by the RSS immediately condemned and criticised Kailash Satyarthi for his ludicrous appeal to a monstrous organisation and its feral footsoldiers. Many of those liberal democrats, who until yesterday hailed Kailash Satyarthi as a crusader against child abuse, were shaken and left numb.

Journalist Neha Dixit did an incredible investigation into a notorious crime committed by the RSS in Assam. Codenamed Operation Beti Uthao (girl child lifting), the nomenclature is a parody of Narendra Modi’s much publicised “Beti Bachao, Beti Padhao” (save the girl child, educate her) campaign. The whole work is published in the Outlook and surprisingly, according to one of Dixit’s Facebook posts, this report was also shared with Kailash Satyarthi’s office at the time of publication to ensure that the Nobel laureate is aware of a severe crime taking place in the country.

The investigation by Neha Dixit shows how the RSS has duped parents of 31 poor Adivasi girls of Assam to smuggle them to Gujarat and Punjab, where these little girls were indoctrinated by the proselytisers of Hindutva and radicalised to work as the Sangh’s pawns in the tribal areas. This report created a stir and have been discussed widely, however, the RSS and the BJP, with their political hegemony over Assam, remained unmoved and following their modus operandi, they launched a series of vicious attacks targeting Neha Dixit and her work.

Two years after the report was published, Kailash Satyarthi could very nonchalantly invite the RSS Shakhas, infamous for their misogynistic outlook, violence and communal vitriol targeted at polarisation, to join his “noble” effort and work as a “firewall” at the village level against child trafficking. By invoking “Bharat Mata”, Kailash Satyarthi seeked support for the girl child from those accused of lynching people, raping women and organising large-scale genocides to wipe out the minority Muslims and Christians.

“I request the youth from Rashtriya Swayamsevak Sangh to take a lead on this path for saving the present and future of our motherland. If the branches (shakhas) of the Sangh situated in almost all villages across the length and breadth of our country serve as a firewall to protect this generation of children, then all the generations to come will become self-sufficient in protecting themselves.”(sic)

The exact wordings of Kailash Satyarthi’s speech where he urged the RSS youth to play a key role in stopping child abuse, especially trafficking, at the village level. These words will look like they appeared from the depth of an ocean of innocence, as the speaker appeared quite oblivious about what the RSS does and appealed to them as he would appeal to a social-organisation that will call itself ‘apolitical’. It seems like Kailash Satyarthi, the man so fond of “Bharat Mata”, didn’t know anything about the credentials of the RSS, or it may be he knows everything yet acts innocent to hoodwink the people and legitimise the presence of a Hindutva fascist organisation like the RSS in the Indian society. Actually, his call to the RSS translates into an invitation to launch new programmes of arms and ammunition training under the banner of “self-defence” and raise a battalion of such militarised and radicalised children who can live and die for the goal of a “Hindu Rashtra”, the theological Brahmanical dictatorial state that the RSS wants to establish.

If we assume that Kailash Satyarthi missed out this investigative piece of Neha Dixit in 2016, or the report withered from his memory blocks, it would have costed simple common sense to realise that how the RSS treated women and young girls during the Gujarat or Muzaffarnagar pogroms. They simply didn’t just gang rape and kill women of all age, to showcase their bigotry and Islamophobia, they tore the womb of pregnant women with swords, forked out the foetus with tridents and then roasted them in flames. Yes, those very men did it whom Kailash Satyarthi was pleading to take action against girl trafficking.

“A strong nation can not be built by hurling blames and accusations on governments nor can it be made merely by making solicitations every now and then.”(sic)

He absolved the government of any responsibility of protecting children, especially girl children, by keeping it above all forms of criticism and opposition, which will help of course the government to escape its constitutional duties. By not criticising the government, one will help it become nonaccountable for its deeds, despite running the show using public money. Thus, due to the complicity of men like Kailash Satyarthi, men like Nitish Kumar and Sushil Modi are able to escape any scrutiny over their callous attitude towards the safety of little girls in the state-run homes in Bihar, where more than 30 children were raped by their so-called caretakers.

The RSS is a Hindutva fascist terrorist organisation and by giving it the responsibility of shielding the children, especially little girls, at the grassroots, someone like Kailash Satyarthi is actually helping the organisation to position itself as a protector of lives, which it’s not. It’s the responsibility of the government, despite Kailash Satyarthy’s reluctance to hold it accountable for its deeds, to protect the rights of the children and take preventive actions against traffickers and abusers. Under no circumstances, a government that’s running with public money can be absolved of its responsibilities, even though a Nobel laureate may want so because no quasi-government, extra-government forces like the Hindutva fascist RSS can be allowed to meddle in the questions of law and order of the country.

It’s not that Kailash Satyarthi’s appeal to the RSS will make a big difference to its functioning or make its men guard women from abusers, rapists, traffickers (when most of RSS men are infamous for these crimes), however, his endorsement of RSS as an organisation that can play a role in protecting children from abuse actually added a layer of sheen to the otherwise shoddy credentials of the RSS and it will be continuously marketed by the Hindutva fascist camp, especially in the run-up to the major elections, to thrust the rapier into the opposition’s attack against it.

Being an organisation notorious for its crime against women and children, including the foetus in the womb, the RSS is not going to play any role in protecting girls or women from abuse or children from slavery or trafficking. The RSS men are perpetrators of some of the goriest atrocities against women and children. However, an appeal from a Nobel laureate like Kailash Satyarthi will help the RSS men to carry out their extra-judicial vigilance on women and children more vigorously now, blaming the Muslims of not only “Love Jihad”, but also of trafficking Hindu girls. It will surely help the RSS unleash its vigilante violence targeting Muslim men by falsely accusing them of abusing or abducting children, following the same modus operandi used during the “Gau Raksha” violence.

For years, the RSS and its various offshoots like the Hindu Samhati, Bajrang Dal, Vishwa Hindu Parishad, Shri Ram Sene, etc. are violently attacking Muslim men in relationship with Hindu girls by accusing them of “Love Jihad”, which has resulted into severe vigilante violence and suppression of women’s right in rural India and even in many urban areas. Now that a Nobel laureate like Kailash Satyarthi has given legitimacy to the RSS as an organisation that can protect children, it will intensify and upgrade its violence to a new level. While many Muslim men will be killed brutally, Kailash Satyarthi, a typical Brahmanical social-worker, will derive orgasmic pleasure from the gory atrocities and blood spilt on the streets.

Winning a Nobel prize never helps an individual become a superior being, a morally or politically upright and correct person. Rather, the Nobel laureates are chosen from those who are politically opportunist and morally corrupt. The Nobel prize is itself given by an organisation that’s funded by a big capitalist trust and the prize is reserved exclusively for those who have done something extraordinary to prevent the collapse of the capitalist system, the world imperialist system to the working class’ revolutionary struggle or have helped imperialism to consolidate its global hegemony through their genius.

Thus, it’s no wonder to see Aung San Suu Kyi, who oversaw the brutal genocide of Rohingya Muslims in Myanmar win the Nobel; it’s no wonder to see Barack Obama, whose regime killed thousands in Afghanistan, Iraq and Syria, win the Nobel Peace Prize. Similarly, US imperialist monster and war criminal Henry Kissinger, Zionist terrorists Shimon Peres and Yitzhak Rabin, Palestinian traitor Yasser Arafat, etc. won Nobel because of their unquestionable loyalty towards the interests of the global monopoly-finance capitalist system led by the US imperialism.

When Kailash Satyarthi is criticised for betraying the Nobel award, just like Aung San Suu Kyi, the critics forget or want to conceal the true character of the Nobel prize, which is awarded for keeping the capitalist system alive or for strengthening its exploitative system. If Nobel was awarded for real heroic deeds or path-breaking contributions towards the development of human society, then the fierce anti-imperialist warriors, the champions of working class’ struggle, the revolutionary leaders  of the world would’ve been Nobel laureates rather than few sleazy double-dealers who work closely with the capitalist system and fights to preserve it.

These liberal and democrat critics, who are shocked by the sudden RSS affection of Kailash Satyarthi, hide the fact that Kailash Satyarthi’s work is centred around divorcing the movement against child trafficking and child exploitation from the very political struggle of the poor people for power that targets to smash the foundation of the unjust socio-economic order that promotes exploitation of the poor, the marginalised and the weak. The focal theme of Kailash Satyarthi’s NGO agitation is to hoodwink the poor and desist them from participating in any political movement that aims at ending the predatory system in which the poor are crushed every day to appease the greed and lust of the rich and the powerful.

It’s imperative not only to criticise Kalyan Satyarthi for his pleading to the RSS, but to expose the likes of him, the NGO brigade that wants to “a-politicalise” people’s struggle for their rights, equality and an egalitarian and progressive society. It’s also important to expose the reality of the Nobel and other such awards given by the big corporate capital-funded agencies. It’s important that the people recognise who actually are their crusaders and who are decoys planted by their enemies to divert, distract and disrupt their struggle. It’s also time to expose and hasten the doom of such institutions and orders that create men like Kalyan Satyarthi, the “activist” pawns of fascism and corporate tyranny. The faster we will be able to expose and banish them from the space of influencers, the better it will be for the oppressed and exploited people of India.