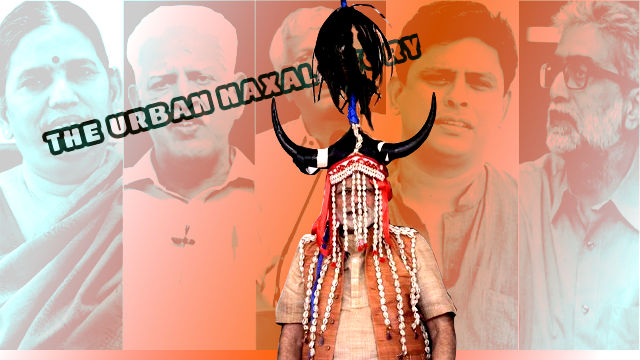 Participating in the campaign trail of Chhattisgarh assembly election, Prime Minister Narendra Modi trained his guns at ‘Urban Naxals’, accusing them of living ‘luxurious lives’, riding luxury cars and instigating violence in Bastar. ‘Urban Naxal’ is a term used to demonise dissent by the RSS-led Hindutva fascists. Mr Modi was speaking at Jagdalpur, 450 km away from capital Raipur. South Chhattisgarh is a Maoist stronghold, where the Indian state has launched a bitter war against the tribal people to evict them from their land, forests and rivers so that these can be handed over to big mining corporations.  The Maoist insurgents have gained a foothold in the region by capitalising the woes of the poor and deprived tribals and turning it into a political rage against the Indian establishment.

Under Narendra Modi’s Hindutva fascist rule, not only the dissenting voices, especially of the intellectuals like writers, poets, journalists, students, teachers, lawyers, etc. are muffled by brute state terror, even the institutions like the judiciary and the executive are so unapologetically turned into saffron quarters that those who suffer injustice, repression and exploitation, have no opportunity to get any sort of institutional respite. The ‘Urban Naxal’ tag is the recently manufactured template of the RSS-led Hindutva fascist camp and its lapdogs, who are using the state machine to crack down on dissenters who criticise the Modi regime by accusing them of abetting the Maoist movement in eastern and central India.

Earlier this year, the Maharashtra government of the BJP cracked its whip against civil rights activists and vocal critics of the Narendra Modi regime by falsely implicating them. The Pune Police had arrested prominent civil rights activists by accusing them of being ‘Urban Naxals’, a term coined by the RSS taking a cue from Vivek Agnihotri, a right-wing fascist filmmaker and rabble-rouser. The police state is alleging that there’s an attempt to institutionalise left-wing insurgency of the Maoists by their overground urban supporters and the allegation is taken at its face value and many prominent activists are thrown behind the bars after they were booked under draconian laws.

By accusing the intellectuals and activists, who are fighting for the cause of the tribal people facing the onslaught of the state machinery and big corporations, of living in sheer luxury and instigating trouble with the ‘support of the Congress’, Narendra Modi tried to turn the tribals against those in the cities who are voicing their concern. Well, if Narendra Modi has so much problem with people living in air-conditioned houses in the cities or travelling in luxury cars (which are neither true for the majority of the activists who live a simple life nor are criminal offences, according to the Indian law) then we must turn the table on him. We will put some inconvenient facts, sourced from the public domain to the prime minister, which will definitely tear his ‘pro-poor’ mask.

A few months ago, Narendra Modi claimed that he isn’t scared of standing with the ‘industrialists’ of the country. His association with Gautam Adani, Mukesh and Anil Ambani, Dilip Shanghvi and other big crony, comprador capitalists isn’t under the warp. Without the support of the Congress, Narendra Modi not only travels in luxury cars but also rides private jets sponsored by the Adani group. The Adani Group is notorious for its cronyism, which, with the patronage of Narendra Modi, helped in the meteoric rise of the once unknown entity to the highest echelon of Indian comprador capitalism. Narendra Modi and his coterie are often found enjoying the hospitality of the Adani Group for obvious reasons and in the last four and half years of Modi’s rule, the Adani Group saw a constant increase in its total wealth.

Similarly, Narendra Modi helped the Reliance groups of both Mukesh and Anil Ambani to prosper under his rule and the siblings never hid their love for Narendrabhai. Reciprocating his love for the Ambani brothers, Narendra Modi never felt shy to help these big ticket donors of the BJP. The unashamed bid by Narendra Modi to provide undue advantage to Anil Ambani’s Reliance Defence Ltd., a novice firm, by making it a partner in the Rafale Jet deal with the Dassault Aviation company of France, at the cost of public sector Hindustan Aeronautics Ltd, has created a stir in the country and still, unfazed by the people’s discontent over the scam, Narendra Modi is manifesting his loyalty towards Reliance by unapologetically supporting the corrupt deal.

Though Narendra Modi will always shed tears and play a victim card when in trouble by citing his carefully manufactured ‘humble background’ as a ‘tea seller’, of which there is no evidence, he, unlike other barebone RSS leaders, is known for his expensive taste of fashion and lifestyle. From sporting expensive Bvlgari glasses, Movado watches, carrying a Mont Blanc pen to wearing a customised suit worth Rs 1 million, Narendra Modi never ceases to amuse the hungry, poverty-clad, destitute people of the country with his luxurious lifestyle. Yet he wipes his tears with an imported napkin and accuses the Congress of targeting him because he is poor! Bless be the country with such level of poverty in which the prime minister has sulked.

Apart from his personal taste for expensive fashion, Narendra Modi’s everyday expenses are not less than some average Indian urban lower middle-class family’s annual household expenses. Consumption of five mushrooms of Rs 80,000 each is a  daily affair for the prime minister according to Congress MLA Alpesh Thakor. Modi, while preaching the country the need for austerity and bitter medicine for the economy, will not dither from spending Rs 45 billion from public exchequer behind his publicity and Rs 14.84 billion on his foreign trips to 84 countries between 2014 to July 2018.

While accusing the ‘Urban Naxals’ of being rich, Narendra Modi must tell the people of Chhattisgarh, who are ruled by his party since last 15 years and have been living in abject poverty, destitution and hunger, that the BJP is the richest political party in India, at least on papers, having an income of Rs 10.34 billion in the last one year and the party has built an office worth Rs 5 billion in the heart of New Delhi. The same amount could have transformed the lives of many tribal people of Chhattisgarh whom the prime minister asks to desist from joining the Maoist ranks.

The hypocrisy of Narendra Modi over the wealth factor and his occasional tirade against the opponents by playing the victim card is now comprehended by a large section of the poor. The amount of money Narendra Modi and his party spends on personal grooming or publicity could have brought a massive socio-economic transformation in Chhattisgarh and changed the lives of the poor tribals forever. However, the peculiar character of the capitalist system will never allow any such political party that represents the interests of the comprador capitalists and foreign corporations to alleviate poverty through any active intervention. The poor will reel under the burden of massive exploitation and poverty, while the big comprador and crony capitalists, foreign corporations and their lackey politicians like the prime minister and his colleagues will enjoy the riches of life, exploited from the labour of the poor.

Narendra Modi must remember that his government is in a state of war with the tribal people of the country whom they want to evict so that the forests, villages, land and river of the tribal belt, rich in mineral deposit, can be handed over to big corporations like Vedanta, Posco, Essar, Tata, Adani, etc. While waging this war, Narendra Modi must unequivocally support the mining corporations and condemn the tribal people who are since resisting this nefarious design of the Indian government. Thus, Narendra Modi should stop lecturing the tribals on what type of life those who support the tribal resistance live and focus on killing them because that’s the reason the big corporations have placed him at the helm.

The ‘Urban Naxal’ paranoia may help the BJP and Narendra Modi to spread xenophobia among their hardcore upper-caste urban supporters, however, among the tribal people, who have been living an uncertain life due to Operation Green Hunt and are dodging the bullets of the state to live yet another day, such campaigning will always backfire.

Narendra Modi and his coterie may be afraid of dissent in the cities and institutions, however, the struggling tribals know that dissent is the essence of life, as without dissent they will perish, their existence and the sustainable economic development model that they have built since centuries will also disappear. So either Narendra Modi should eat up his cacophony over ‘Urban Naxals’ living a luxurious life, or the people will teach the BJP and the entire Hindutva fascist camp headed by the RSS a lesson that will shine in the pages of the anti-fascist struggles of the world forever. As Narendra Modi will not give up his rantings on ‘Urban Naxals’ only the second option seems feasible.