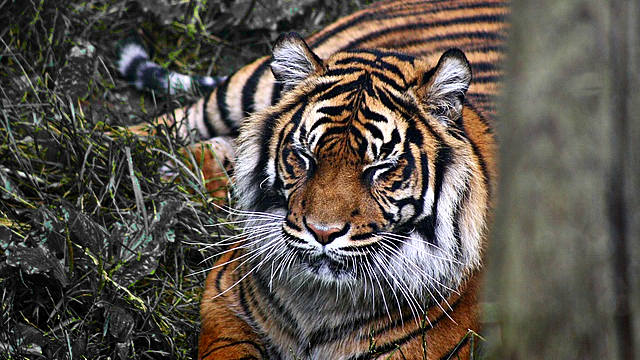 The brutal killing of a tigress, Avni, by a sharpshooter illegally hired for the job by the Maharashtra government, showed how hollow is the Indian state’s commitment towards saving wildlife in general and conserving tigers in particular. The tigress Avni, codenamed T1, was shot by Asgar Ali, son of sharpshooter Nawab Shafat Ali, on 2 November at Borati forest of Yavatmal district of Maharashtra.

Avni is survived by two cubs, whose future hangs in uncertainty as the government is non-committal towards helping them survive. Without a mother, it’s feared that the little cubs will not be able to survive their jungle life as it becomes hard for them to get food and thwart attack by other wild animals.

The killing of the tigress Avni, accused of being a man-eater, created a nationwide stir among the environmental and animal rights organisations, forcing the BJP leader and Narendra Modi’s cabinet member Maneka Gandhi to unequivocally condemn the incident and slam her own party’s government in Maharashtra and its forest minister.

Maneka Gandhi accused the Maharashtra government of grossly violating the laws regarding wildlife protection and her rhetoric against the BJP’s minister helped her to retain the animal rights champion tag that she wears since a long time. Ms Gandhi and the animal rights activists questioned why the Maharashtra government chose to kill the tigress Avni when there were good chances to tranquilise it and capture it alive.

Slamming Maneka Gandhi for her vociferous opposition to the killing, Maharashtra Forest Minister Sudhir Mungantiwar gave his own clarification over the killing of tigress Avni.  The minister claimed that the government took the step only after the Supreme Court quashed a petition to save the tigress, which according to Mungantiwar became a man-eater and allegedly killed many people.

However, no such news of a tigress turning into a really dangerous man-eater was ever made public until the Maharashtra government started helping its big corporate donors to acquire forest lands, especially in Yavatmal district. There are reports of the BJP government transferring large tracts of forest land to the big corporate houses, including tiger reserves. Nearly 88 acres of forest land has been transferred to big corporate houses floating existing norms. There are news of Anil Ambani’s Reliance getting access to the Yavatmal jungles and thus the Maharashtra government hurried to clear the forest of the animal that could threaten the long-term plans of the crony capitalist.

Even a Hindutva agent and Maratha chauvinist-fascist like Raj Thackeray, who leads the dreaded Maharashtra Navnirman Sena, criticised the BJP by accusing it of clearing forest lands and killing the tigress Avni to pave way for Reliance’s forest acquisition and turning it into a graveyard of the environment. Despite the government and the Reliance group denying any wrongdoings, it’s evident that the forest lands of Yavatmal will go to the Anil Ambani-led group.

BJP’s long-term ally Shiv Sena also blamed the BJP of killing the tigress to help the corporate world. Though the environmental and animal rights activists are not agitating against the corporate aggression on the forest land due to the corporate donations that run their show, the opposition towards the notorious policies of the BJP and its shameless corporate appeasement is growing among the villagers and tribals who live near the forests.

Deforestation of Yavatmal will certainly help big corporations to mint huge profit but it will leave the ecology destroyed. Not only the animals but the natural flora and fauna, the entire ecosystem will suffer the consequences. The corporate encroachment up on forest land has already shrunk the animal territory and is thereby resulting into violent conflicts between humans and animals. Even if one considers that Sudhir Mungantiwar wasn’t lying about the tigress Avni turning into a violent, man-eater animal, then too we can see this pattern emerging out of the capitalist greed that’s deforesting and taking away the natural habitat from the animals.

Avni died brutally, like many more animals, and above all, humans killed by the Indian state to serve the business interests of the big corporate houses. When the Indian state can launch a largescale war to evict the tribal people from their land and snatch their forests and rivers, then the tigress Avni was far insignificant as a sacrifice that the Hindutva fascist state would make to appease its corporate overlords. It’s not only the labour, but the entire planet that the capitalist system is up against and it’s high time that a nationwide, concerted and united front is built to resist this corporate aggression. The delay will not only kill our animals and end our forests, it will also put our own existence into a perilous state.