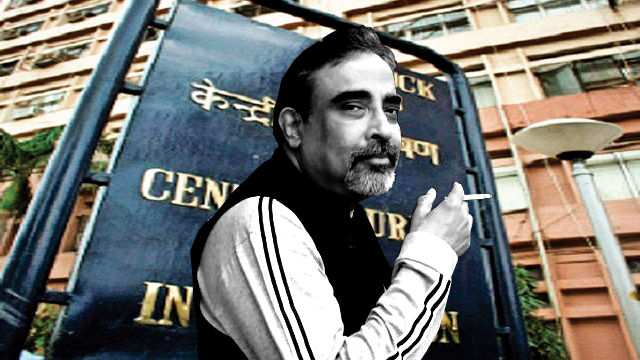 Suman Chattopadhyay, a renowned corporate media personality and the editor of Bennett and Coleman’s Bengali newspaper Ei Samay, was arrested by the CBI for his alleged involvement in the I-Core group’s Rs 30 billion chit fund scam. It’s alleged that Chattopadhyay received funds from I-Core for his media venture Disha Production and Media Pvt Ltd in West Bengal before his stint as the editor of Ei Samay.

Starting his career with the left-leaning Aajkal newspaper in the early 1980s, Suman Chattopadhyay had a successful stint as the editor of the Anandabazar Patrika, the largest-circulated Bengali daily. After a brief stint in the television between 2004-06, Suman Chattopadhyay had started his own newspaper Ekdin for which he allegedly took money from the chit fund company, which duped poor people who invested their small savings in the companies like Sarada, Rose Valley and I-Core. Nearly Rs 50 million was invested by the I-Core group in the media ventures, Ekdin and Disha owned by Chattopadhyay.

Known to be a close aide of Mamata Banerjee since her Congress days, Suman Chattopadhyay played a crucial role during the tenure of the Left Front government to create a media hype projecting the Trinamool Congress supremo as the only alternative and harbinger of prosperity and development to West Bengal. Along with a host of other media houses funded by the chit fund money, Suman Chattopadhyay’s media ventures too lambasted the opponents, especially the parliamentary and the Naxalite left forces that opposed Mamata Banerjee and acted as her sycophant ever since she rose to power.

Soon after the Sarada scam became public in 2013, the media houses funded by the chit fund companies started warping up their show. With the arrest of two of Mamata Banerjee’s topmost toady journalists, former Rajya Sabha MP Kunal Ghosh and the editor-in-chief of Sangbad Pratidin Srinjoy Bose, Suman Chattopadhyay found himself in a tightrope. With the warping up of Ekdin, Chattopadhyay landed at a job as the editor of Times Group’s maiden Bengali newspaper, Ei Samay. Bennett and Coleman fired Suman Chattopadhyay soon after his arrest from the newspaper to clean off its hand. Other media organisations also remained mum on his arrest, except for publishing formal reports regarding his arrest.

Questions are raised over the Bengali media’s conspicuous silence on the issue of Suman Chattopadhyay’s arrest, despite him being a close confidant of Mamata Banerjee and other big shots of the ruling TMC. The same media hyped the news of Kunal Ghosh’s arrest in 2013, followed by the arrest of Srinjoy Bose of Sangbad Pratidin. The silence at present is a stark contrast to the media’s hysteric behaviour five years ago and many of the media insiders are seeing this as an arrangement between the TMC government and the local media outlets at the onset of the 2019 Lok Sabha polls, in which the ruling party may come under a strong challenge from the BJP. It’s alleged to be an attempt by the big media houses to keep their skeletons intact in the closets and to maintain harmony and tranquillity in the political front.

Any mention of the chit fund scam can cause predicament for the TMC-led government, as most of its leaders and ministers, including the ‘sign of honesty’ Mamata Banerjee herself, are accused of being complicit in the multi-billion rupees grand Ponzi scheme that robbed thousands of poor families of their savings. To keep the public discontent under check and to curb the growth of dissent over this grand corruption scheme, the Mamata Banerjee-led government doesn’t want any form of hype on the issue alike what took place between 2013-16. Thus, Suman Chattopadhyay, who remained in the good book of Ms Banerjee, is allowed to be cast in the oblivion. A star has fallen.

Is Suman Chattopadhyay, known for his communist-bashing and Mamata eulogising standpoint, the only culprit in the media industry who took money from the promoters of the Ponzi scheme? Is it just Suman Chattopadhyay, Kunal Ghosh and Srijan Bose who can be accused of being complicit in the crime of syphoning off chit fund money and none else? Or are they just ‘big’ pawns who are saving the biggest icons through their own castigation?

The ilk of Suman Chattopadhyay, Kunal Ghosh, etc. who have been working as power brokers under the garb of ‘journalist’ in the corporate-controlled mainstream media industry, are not ‘lone wolves‘, they operate as part of a bigger system where the business houses that own the media also try to exert their influence on the political system and reap the benefits of their investments. The brokerage amount these so-called journalists receive in lieu of deal brokering between big corporations and political brass is immense and cherry picking one or two of them as culprits and forgetting the larger picture is, of course, a crime.

Journalism in the mainstream is less about being brave, courageous and objective; it’s more about being able to network, broker deals and getting things done through those who have the power and authority. Though due to periodic exposure of some of the egregious parts of the corporate media industry public ignominy is caused, the stalwarts of the industry are capable of dodging the impact by using the gargantuan influence that the industry has on public opinion. Thus, the crime committed by the corporate media industry is blamed upon a few ‘individuals’, who are then labelled as ‘black sheeps’ and are ostracised. Such Kunals or Sumans don’t find any camaraderie from their brethren as they become scapegoats for the industry and even for the political brass they served.

Thus, Kunal Ghosh, who used sing paeans to Mamata Banerjee during his stint as the editor of one of the newspapers funded by the Sarada group through Ponzi scheme money, became a vocal critic of the TMC supremo and started accusing her of playing a nefarious role in the entire scam. It’s no wonder that Kunal Ghosh found refuge in the laps of the BJP and now his sins will be absolved through his tirade against Mamata Banerjee during the election season. Similarly, all eyes are now set on Suman Chattopadhyay to find out whether he collides with the BJP or cooperates with it to take on Mamata Banerjee on the corruption propaganda front.

Whether Suman Chattopadhyay is really guilty or innocent is a matter that a competent court of law must decide. However, it’s the prerogative of all honest and courageous journalists, who have still kept their spine intact, to question the mainstream media’s duplicity and expose its crimes, especially of moulding the public opinion in favour of the ruling classes and their lapdogs.

It’s the task of the honest and courageous journalists and the people’s media initiatives to expose the ilk of power brokers who masquerade as journalists and ensure that the common people despise and reject the lies and propaganda of the mainstream corporate media. Unless the people stop subscribing to the mainstream corporate media and are liberated from the vicious effects of such propaganda, the ilk of Suman Chattopadhyay and other such sycophants of power will keep dominating the media space and blacken the image of the very profession where heroic men and women didn’t blink their eyelids before sacrificing their lives for the sake of truth.