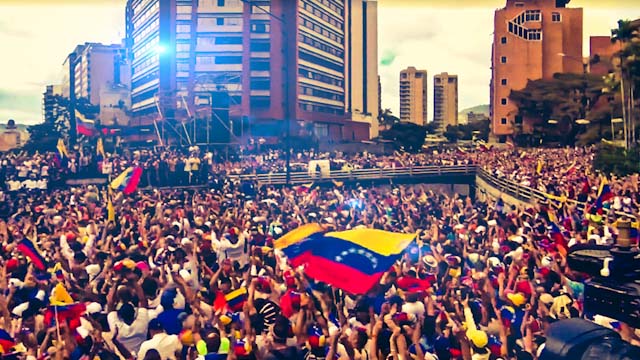 Colonialism is alive and well, just led by different global players. The US doesn’t even make a pretense of respecting the sovereignty of other nations. The US has been changing governments in foreign lands nearly since its foundation. A person just proclaimed himself to be a president of Venezuela without going through an actual election and the US immediately recognised him – that’s the real “democracy with the US characteristic“. Are we back to the Middle Ages in Europe where Kings are frequently determined by neighbouring powers and churches?

Clearly they expect to effect regime change in Venezuela. This is pure thuggery, but then successive US governments have been unrepentant right from the days of Truman whose infamous doctrine resulted in base dictators taking over resource rich countries all over the world. The ground for that was prepared a while ago, its final touches made by the recent British refusal, illegal as all hell, to return to Venezuela its gold deposits.

The US’s war makers have been hankering now for years to overthrow the legitimate, left-wing government in Venezuela. Today, the US rulers also have the support of Brazil with its Bolsonaro military dictatorship and no longer leftist Argentina, while Venezuela’s friends in Bolivia and Ecuador can only stand by and watch and realise they are the next. Poor Latin America!

The Brazilian media is calling Maduro a dictator right now. By almost any metric, Brazil is much more of a dictatorship than Venezuela. Those who are in the know are aware of the CIA’s fingerprints on the coups in Honduras, Paraguay, and most recently in Brazil. It is an agency that works assiduously to cover its tracks but it is just too obvious. The diplomatic and economic sabotage that the US government uses today against Venezuela is no different for that which it used against Haiti in the 19th century.

Not following the meltdowns of Brazilian and Venezuelan government and economics, but the simultaneous collapse of two oil rich. Actually, for the US, the most lucrative prospect is Venezuela. Lots of oil, just across the Gulf of Mexico and not in a political position to garner as much support from the major powers. Obama and Clinton did very similar things on both the regime change and militarism fronts.

OPEC nations in tandem with Russia will now go for reduction in crude oil production to counter decline in prices.Also political turmoils in some oil producing nations like Nigeria, Venezuela, Iraq, and Libya may affect crude oil price. The Venezuelan economy was incredibly mismanaged. Oil producing countries are suffering but not like the Venezuelans. Not only do they not have money, even if they did there wouldn’t be anything to buy. The main reason though is that when oil prices were high, the Chavez government borrowed money hand over fist. This allowed everyone in Venezuela to live quite well. So everyone loved Chavez. Now however they have no way to pay for their debt. No one will loan them money or give them any kind of credit because of inflation. Its an old story.

Brazil (still) exports crude and imports refined products because they don’t have adequate in-house refining capacity. In heydays of oil prices everything looks fine, but when the oil markets fall, their whole economy crashes because refiners still keep their premiums up (this is why value addition gives more stability as opposed to volatility of upstream commodity prices).

Venezuela is no different. Venezuela now plans to import oil to refine. It has the largest oil reserves in the world. Despite they having largest reserve, their crude is not as light or sweet as they would like. Hence they have to import sweeter crude or refined products while exporting heavier one. Venezuelan crude is almost as thick as Tar Sands bitumen and for decades the US imported a large portion of its petroleum needs from Venezuela. Now the Kochs have most of only economically viable heavy oil refineries in the US so they want to get their hands on Tar Sands bitumen.

Hugo Chavez has been popular and widely respected nationalist leader not only in his own country but also in entire Latin America. By his autocratic style he used Venezuela’s oil resources to pull out country’s economy through development. He was always close to the poor and ardent spokesperson against capitalism, particularly against policies of the US. Like Fidel Castro in Cuba, he articulated reforms in Venezuela in his own style.

Chavez and Maduro did their best to reduce their power but it could not be accomplished without a total revolution led by men willing to destroy everything and start over again, while on the other hand, they are eternally threatened by US gunboat diplomacy and the arrival of US Marines, plus myriad sanctions, financial restrictions. Che Guevara was convinced of the necessity of an entire continental anti-capitalist revolution. That’s what he was trying to ignite in Bolivia. He died for it.

Collectivist policies have hurt the country. But so have intense American sanctions.