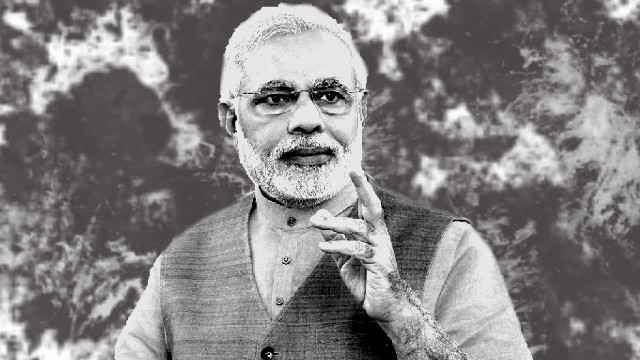 When the results of the 2019 Lok Sabha election flashed on television screens on 23 May, exhibiting a surge of saffron throughout the country as the Bharatiya Janata Party (BJP) with its prime ministerial candidate Narendra Modi raged through a winning spree, the stock markets, both BSE and NSE, saw an upward swing. The BSE Sensex reached a record high of 40,000 points, a remarkable milestone in the history of Indian coupon-clipping capitalism.

Stocks of companies that have patronised and funded Modi and the BJP since a long time, from Mukesh Ambani’s Reliance Industries to Gautam Adani’s Adani Group companies saw a steep increase in their value. For the stock brokers, it was a “market-friendly” election result.

Ever since the formation of the Modi regime in 2014, the BJP didn’t taste electoral defeat except in the assembly elections of Delhi, Bihar (later recaptured), Punjab, Chhattisgarh, Madhya Pradesh and Rajasthan. Often, the BJP chief Amit Shah and his team of strategists are credited for this meteoric rise of the party and its victorious juggernaut. Shah is particularly hailed as the modern-day “Chanakya” by the toady media outlets.

Outside the regular eulogies of Shah by the BJP’s courtiers and sycophant media, if an objective analysis is done over the victorious juggernaut of Modi since 2002, when he first won an election with a thumping majority riding on the goriest Muslim genocide in the country, then it will be found that Modi isn’t what he’s projected as; Modi isn’t the face but the mask, and he’s an integral and inalienable part of a larger and vicious scheme prepared by the Rashtriya Swayamsevak Sangh (RSS) — the fountainhead of Hindutva fascism — to build a Hindu Rashtra, which its pantheon of “ideologues” from KB Hedgewar, VD Savarkar, MS Golwalkar to Mohan Bhagwat have envisioned.

Unlike his fascist counterparts like Donald Trump of the US, Vladimir Putin of Russia, Recep Tayyip Erdoğan of Turkey or Jair Bolsonaro of Brazil, Modi isn’t the supreme fascist leader who works independently. Modi is a project — if we can call it so — through which the RSS wants to establish its model state on the universal fascist principle of “one country, one leader, one religion and one language”. Modi is the means, not the end; he is the vessel but not the content himself. To understand the scheme one needs to delve deeper into the Sangh’s modus operandi that has left the opposition discombobulated.

Dr BR Ambedkar once said “Democracy in India is only a top dressing in an Indian soil which is essentially undemocratic”, exemplifying how a democratic attire was fixed on a feudal and autocratic society where human beings aren’t considered equal due to their birth. The caste supremacy, the privileges enjoyed by the feudal upper-caste Hindus, the consolidation of resources and 73% wealth in the hands of 1% of the super-rich, the systematic exclusion of the Dalits, tribal people, backward castes and minority communities from access to wealth and resources, combine together to show that India deeply remains a semi-feudal society with a dominance of comprador capitalism.

The Hindu Rashtra project of the RSS is driven by fables taught at Shakhas by its proselytisers that talk about a mythical, utopian kingdom of the past, where everyone was happy and prosperous until the Muslims, who are portrayed as “foreigners” and “invaders”, colonised India. The promise of a Hindu Rashtra, according to the RSS’s parlance, is a return to that glorious past when India had internet, sages flew aeroplanes, plastic surgery would replace a human head with that of an elephant, etc.

Such ludicrous claims are not considered as amusement in India, an undemocratic, semi-feudal and Brahminical fascism-ruled society. Rather, a large number of people, surprisingly, most of them highly educated and have an erudite shell, believe in such propaganda and believe that returning to such a monarchy, ruled by a pious Hindu monarch, from a failed democracy, will actually benefit India and make it regain its lost glory in the world.

Democracy, democratic ethos, values and criticism are vilified as “anti-national” trends, while only unconditional faith in the state machinery, the government, and the military establishment are demanded from the people. With myriad propaganda using television, internet, films, etc, the RSS and its progeny have vilified the concept of human rights, demonised rights activists, made questioning the army and the police a taboo, and lionised the concept of a “hero”, a macho leader, who will become a messiah and save India from imaginary threats, especially from an Islamic aggression.

The RSS had always promoted the collective above the individual and never allowed the cult of an individual to exist, as it feared that such a cult can undermine the organisation and become omnipotent. However, the RSS took an exceptional route for Modi because he was nurtured for the project. The project aims to establish a Hindu Rashtra with a popular emperor at its helm, which will gradually transform India into an official Brahminical monarchy — the Hindu Rashtra — where the state will persecute minority communities with impunity, monopolise the ownership of resources in the hands of a few families; a fiefdom of upper-caste feudal landlords, big comprador capitalists, and their masters — the big foreign corporations.

When LK Advani couldn’t win the 2009 Lok Sabha election despite a strong campaign, the RSS decided to field Modi due to his achievements in Gujarat and create a “Hindu Hriday Samrat” (emperor of Hindu hearts) narrative, which will rally the upper-caste, misogynist, feudal-minded, bigot and privileged Hindus behind this brand. This Hindu emperor concept was the first step towards doing away with the concept of people’s supremacy and replacing it with Hindu supremacy.

Modi fitted the role due to his excellent corporate appeasement policy, which he exhibited during his stint as the chief minister of Gujarat between 2002-2014. Modi not only polarised the Hindu vote bank under the upper-caste Gujarati Hindus, transcending all borders of the compartmentalised society, by spreading Islamophobia and by systematically isolating and dehumanising the Muslim community, he also allowed big crony-comprador capitalists like Adani, Ambani, etc, to fill their coffer at the cost of the public exchequer by providing excessive benefits and exemptions to their businesses.

The blessings of Indian and foreign corporations filled the coffers of the RSS and the BJP, making the Sangh Parivar the richest political block in India. The Modi regime obliged the donors in the last five years and will continue to do so in the days to come. At the same time, Modi will bring major changes in the Indian Constitution, especially delete the Secular and Socialist characters from its preamble to do away with the government’s responsibility towards protection of minority rights and towards promoting socio-economic equality. The RSS will simply hype his image and make sure that the cult of Modi and the halo of its invincibility are strengthened every day.

The communication strategy of the RSS has been exemplary. It has adopted different styles and approaches for different classes and castes, principally focusing on the politically-crucial urban middle class and elites from upper-caste Hindu society. It presented Modi as a messiah in different avatars. For some he’s the harbinger of economic development, for some he’s the icon of women’s subjugation to men, for some he’s the license to mob lynch Muslims and Dalits, for some Modi equates to the orgasmic pleasure of blinding and maiming Kashmiri children with pellets. By appealing to such diverse expectations of the upper-caste Hindu bigots from all over India, the RSS ensured that these politically crucial blocks gradually become vocal supporters of a Hindu monarchy.

The coming of Modi 2.0 isn’t merely an election victory by the BJP through vigorous campaigning, it’s actually the result of a long-term plan of the RSS to take a cult to the height of nationwide polarisation, normalising communal violence and bigotry, to annul democracy and reverse all democratic rights the working class and the toiling people have won in all these years through their hard struggles against the ruling classes.

It’s no more beta; it’s no more in the laboratory, rather, this monstrous project is very much implemented in India. Analysing the RSS and the BJP’s gargantuan growth and overwhelming influence using the myopic lens of parliamentary politics, or simply charting it according to the mass organisation-parent body equation will provide no headway to those who are serious about resisting fascism, and defending secularism and democracy.

It’s time to wake up and smell fascism; the consolidation of political, economic and military powers in the hands of a group of reactionary big comprador capitalists and their foreign masters is throwing bigger and unprecedented challenges to the anti-fascist democratic camp. Modi 2.0 isn’t invincible and it’s not vulnerable either. Hence, it’s important to think in new ways, and develop new strategies and tactics to protect the people. If the political preparations aren’t started now then the delay will cause much damage than what can be anticipated.