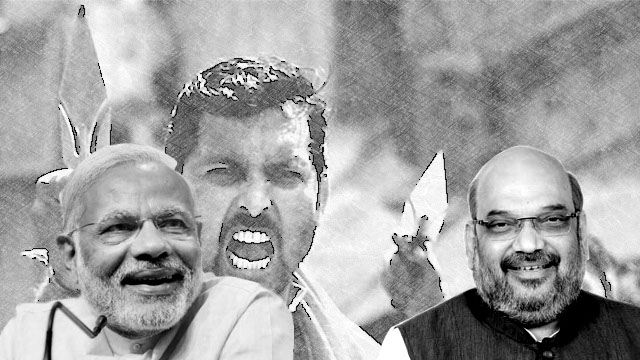 Call it an undercurrent or a wave, or, for that matter, a hurricane or a cyclone, the reality is that Narendra Modi and his Bharatiya Janata Party (BJP) – have swept the country across and have stumped all its competitors to secure a brute majority with ease in the recently concluded 2019 Lok Sabha election. The believers and supporters of democracy and those respecting the value of secularism are definitely perturbed with the results of this election.

It embarks the return of a right-wing Hindutva fascist party, which has largely prided itself upon the rhetoric of kicking out minority Muslims and Christians, labelling them as invaders. The BJP chief has unambiguously declared that Muslims and Christians are “converts” and shall either do a “ghar waapsi” (reconversion to Hinduism) or a nationwide National Register of Citizens will ensure that they are kicked out of the country. Despite, such ferocious remarks, the party managed to garner votes across the country and returned to power with a thumping victory.

Many, including renowned psephologist Yogendra Yadav, are claiming that the BJP’s victory is largely due to the inept capacity of the opposition to create ideology and fight for the morally correct virtues, however, in reality, this election was about one man and his morally infelicitous and corrupt ideology. Ram Mandir at Ayodhya was replaced with Balakot airstrike propaganda, and the caste and class divide was broken under the umbrella of hyper-nationalism.

A government that failed on all economic fronts, a government that punished all segments of businesses and the overwhelming common people with disastrous GST, Demonetisation, and by destroying job opportunities, getting a brute majority like this depicts a crystal clear trend of present-day Indian politics. India is now diminished to a mere Hindu-Muslim binary, trading off all other important issues for this dichotomy.

Inside the voters’ mind

The verdict of 2019 Lok Sabha election has exposed not only the incumbency and incompetency of the opposition in countering the mainstream Hindutva fascist narrative with an alternative but the nature of its voters too. Modi’s victory exposes the communalism that has been festering in our neighbourhood and drawing rooms. The politically crucial upper-caste, Hindi-speaking voters, infested by rabid Hindutva fascist propaganda, didn’t care about social welfare or economically egalitarian society, rather harped their hopes on the promise of a prosperous Hindu Rastra.

A Hindu Rashtra, where the privileged upper-caste Hindu elites and middle class are promised the right to torment the Muslims and other marginalised groups like Dalits and tribal people. Where they are promised a return to a golden past that the Rashtriya Swayamsevak Sangh (RSS) and its progeny have hyped all these years. They voted en-masse for such a Hindu Rashtra, the monarchical dictatorship that will overtake the last vestiges of democracy in India.

These class and caste blocks have been radicalised to the extreme level, which makes them consider Muslims and Pakistan as their enemy and they let their stupidity being exploited by the BJP who mixed national security with a muscular jingoism to hoodwink these blocks. The plurality of the politics and the dominance of its voters to abandon and punish the government that kept the nation alive once has been lost to the univocally of choice. All centred around one man, Mr Modi.

Though Modi and the BJP could have credited the promise of an elusive democracy, which made the majority community vote for the party in 2014, in 2019 the mask is off. It’s purely out of the collective hatred towards the “other” – ie the Muslims and other marginalised groups – that the upper-caste Hindu elites and middle class, who also exerts great influence on the voting pattern of the poor and lower middle class due to their ownership over economic resources, voted for Modi and helped him return to power.

The nerve of the nation

Mr Modi and the BJP together definitely need to be applauded for their commendable performance in the election 2019. They deserve big cheers for understanding the nerve of the majoritarian block and campaigning on the same lines. They caught hold of the bigotry of the upper-caste Hindu elites and urban middle class, which was deeply hidden in their heart all these time, yet never found the right opportunity to explode. By building a narrative of belonging to a humble background, by equating himself with the common people using prefixes like “chaiwala” and “chowkidar”, Modi played to the sentimentalisation of Indians. Mr Modi is first ever prime minister in the history of Indian politics who has legalised unadulterated hatred and celebrated criminalisation. His uninterrupted stress on Hinduisation of the society evoked the anti-Muslim feeling that was deep-rooted in every average Brahminical heart.

By legitimising hatred against Pakistan through his committed speeches and theatrics (Balakot Airstrike), he made the voters believe that he is the only prime minister who could do such an extraordinary act of courage and keep India immune from Islamic terrorism. Yet, the same prime minister didn’t shy or minced his words while normalising Hindutva terrorism by promoting someone like terror-accused Pragya Singh Thakur, who became an MP from Bhopal.

The entire episode of election 2019 will remain symbolic for reasons more than one. First, it exposed the true nature of majoritarian Indian voters. It exposed that nothing matters for this new aspirational India. It revealed that irrespective of their tantrums and rhetoric over development, these voters do not want a stable economy, neither jobs nor do they want decentralisation of power over institutions like the Reserve Bank of India and the CBI as opposition’s effort to highlight such issues failed disastrously.

In fact, the only things that seem to work for these classes and castes are populism, nationalism, and demagoguery, not ideologies or welfare programmes. It seems that India is not saying that there is no alternative rather its dominant caste and class groups are saying that we don’t want an alternative. This new nation pushed ideology to the margins and accepted a hard-core fascist leader to protect the values of a Modified India or, as they call it, “Bharat”.

But, why are sane minds in shock with this verdict? Why does it feel inadmissible when Pragya Singh Thakur wins with a huge margin after her glorifying comment on Nathuram Godse? Let’s be fair and honest and accept that this is the same electorate that voted Modi to power for his role in the 2002 Gujarat pogrom. This is the same share of the population who trusted the rhetoric of BJP president Amit Shah who is an accused in many criminal cases.

These privileged, upper-caste elites and middle class, drooling over the fact that they can repress and exploit the majority of the country, the working class, the peasantry, the marginalised communities, are celebrating the return of their so-called Hindu-pride by publishing derogatory and abusive posts on social media. Modi has fulfilled their long cherished dream of officially establishing a Brahminical supremacist state. Why wouldn’t they vote for him? These voters have bartered the soul of India for Modi to return to power and there is no going back from this. All, we can do is fight for a better future by organising the disorganised, by encouraging the marginalised and by uniting what’s called India to fight and defeat this corrupt ideology and the notorious agenda of establishing a fascist tyranny on India. The present is dodgy, yet the future can belong to the people who fight for democracy and equality if they can unite and emphasise on achieving their goal from now onwards.