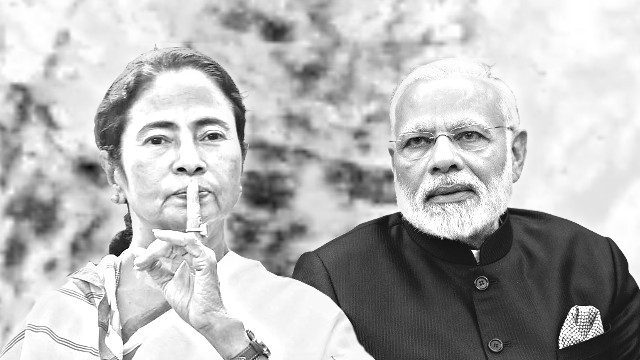 After the Bharatiya Janata Party (BJP) breached the bastion of the Trinamool Congress (TMC) in West Bengal in the recently-concluded Lok Sabha election, causing grave ignominy to Chief Minister Mamata Banerjee, the state has sulked into a reign of incessant partisan violence and counter-violence as the TMC and BJP supporters are increasingly clashing with each other in different parts of the state. While in Sandeshkhali of North 24 Parganas district, the BJP’s conflict with the TMC caused four deaths, three of the saffron outfit and one of the TMC, in Gangarampur of Dakshin Dinajpur, the BJP supporters clashed with the West Bengal Police under the leadership of the BJP’s state chief and Member of Parliament Dilip Ghosh.

These incidents of violence, coupled with the swinging of allegiance towards the BJP from the TMC’s grassroots and middle-level leadership in different districts, is shattering Banerjee’s dream of ruling the state as an unchallenged empress. Banerjee is facing the spectre of 2009 when her party breached the erstwhile Left Front government’s iron-curtain and won 19 out of 42 seats in the state, one more than what the BJP won this time. She and the TMC started a similar vicious cycle of violence then. Now, Banerjee is facing her nemesis to be, ironically the very outfit whose seeds she once sowed in the state’s politically fertile land. She has only a few chances left before the BJP checkmates her, either through a significant victory in the 2021 assembly election or through a President’s Rule in the state using Article 356 of the Constitution. In this article, we have discussed their possibilities in details.

Prime Minister Narendra Modi and BJP President Amit Shah are quite happy to lead a siege of Bengal using none other than the servile Bengalis acting as the bootlicking agents of Hindi-Hindu-Hindustan cavalcade of the Rashtriya Swayamsevak Sangh (RSS)-led Hindutva brigade. Actually, seizing power in West Bengal has been a long-cherished dream of the RSS, which had established a strong presence in the state since the 1940s with the support of the Hindu Mahasabha, whose leader Syama Prasad Mukherjee became a very close aide of the RSS and after quitting the Mahasabha founded the Bharatiya Jan Sangh (BJS), the precursor of the BJP.

Though neither the BJS nor the BJP could cut any ice in the state’s politics, alike the Mahasabha, during the post-colonial period, the RSS continued its activities in the hinterlands and raised a large army of volunteers by enrolling Hindi-speaking upper-caste Hindus and tribals. However, it’s only after the assistance of Banerjee’s TMC in the late 1990s and early 2000s that the RSS could reach out to the Bengali Hindus and started radicalising them with new-age Islamophobia, ie inciting communal hatred against Bengali Muslims by stamping them as “other” and making the Hindi-speaking minority appear as the “own”.

Now, out of the non-Bengali circle, out of the Marwari and Gujarati drawing rooms, the RSS and the BJP have reached out to most Hindu households of the state through its vitriolic campaign carried out through 50,000 WhatsApp groups, its regular bush telegraph campaigns, etc. A large number of Bengali Hindu youth, rendered unemployed due to lack of opportunities and the Bengali criminals, who had been on the wrong side of the power equation, have been hired at a lucrative price by the RSS. More than 50,000 non-Bengali RSS thugs sourced from eastern Uttar Pradesh, Bihar and Jharkhand are operating in areas like Asansol, Durgapur, Raniganj, Purulia, Howrah, Medinipur, Jhargram, etc. No administration is challenging them. The hired goons of the BJP are chanting Hindutva warcry “Jai Shri Ram” in front of the convoy of Banerjee to provoke her, and she, like an immature politician, is getting irked and reacting in such a way that’s helping the RSS and the BJP to score brownies by projecting her as anti-Hindu.

Though unprecedented, yet, it’s a fact that West Bengal’s politics has got a severe communal polarisation. The Hindu vote bank is created by the BJP, ironically by rallying all contradictory castes together against a purported “Islamic threat”, which is amplified by the RSS’s toady media outlets for years. Even the polarisation of the 27% Muslim votes in favour of Banerjee’s TMC isn’t helping the party to reach the total vote share of the BJP in different constituencies. The anti-TMC vote bank of the Left Front led by the parliamentary opportunist and ailing Communist Party of India (Marxist) has gone to the BJP’s basket, making things more difficult for Banerjee.

What is that Banerjee can do now to save her rule and thwart the threat posed by the BJP to the state?

Banerjee and the TMC can always try to return to the National Democratic Alliance (NDA) and become its partner by accommodating the BJP in the West Bengal cabinet. Though the BJP will not relent for less in West Bengal, unlike Bihar. Thus, Banerjee may have to give away a large part of her power to the BJP and allow the saffron camp to dictate everything, which looks quite impossible due to her trait of consolidating power in her own hands and her narcissist character. Thus, except for extreme difficulty, she won’t sign up for an NDA membership right away.

One of the other important options left with Banerjee right now is to shed her classic Congress image. It’s time for her to take up Bengali nationalism as a weapon to combat the Hindi-Hindu-Hindutva aggression. Though the urban, upper-caste elite and middle class Bhadralok community despise her, it’s by citing the gross cultural sacrileges committed by the Hindutva camp and its conspiracy to destroy Bengal’s social and cultural fabric, that she can incite the Bengali sentiment of the common masses, which the RSS and the BJP are really frightened about.

The Bengali identity question is raised by the TMC-endorsed semi-fascist Bangla Pokkho, which may garner more strength in the days to come due to the rising insecurity among one section of the Bengali people regarding the security of their lives and livelihood. Though now the Bengali nationalist movement isn’t popular due to its urban-centricity, middle class and elite character, a dose of populism can give a momentum to the movement as desired by Banerjee.

However, given the complexities of West Bengal’s politics, where the purse strings are held by the non-Bengali upper-caste Hindus, it’s unlikely that Banerjee can dare to kick the butts of the Marwari-Gujarati and Hindi-speaking comprador capitalists and big moneybags, who have been funding her party since the 1990s. It will cost Banerjee a fortune to become a vehement Bengali nationalist and build up resistance against the BJP.

Countering the Hindutva fascist aggression can’t be only prevented with the Bengali nationalist question but also by weaving unlikely alliances and forming new fronts. If Banerjee can scale down her adamancy and arrogance, she can reach out to her insignificant foes and dangle better baits before them than the BJP. To start with, she can always cajole the CPI(M)-led Left Front, her old foe, to come into an alliance with her against the BJP.

The opportunist left, which saw a massive erosion in its vote bank when the anti-TMC votes shifted to the BJP, can’t say a “no” to the TMC when the latter will cite the imminent threat posed by the BJP. It will render the CPI(M) as an official “B team” of the BJP, which will hamper its prospects in states like Kerala and Tripura, where it’s fighting the saffron party.

As the parliamentary left has shunned all ideologies and principles to become one among many other ruling and mainstream parties, it’s unlikely that the phoney communist ideological signboard of the CPI(M) can create any obstacle in uniting with the TMC, especially if it promises a halt of TMC’s violence against its cadres and a route to return to power without much trouble or a long waiting period.

Banerjee can also approach the Congress party for a face-saving exercise. Under the High Command’s directive from New Delhi, the state Congress will oblige her in return of a share of power. This will also strengthen her prospects in the 2021 assembly election when the BJP’s wave will try to demolish all barriers of the opposition. However, if she is unable to project a prudent, humble and apologetic face to the people, she won’t be able to garner anything except the bitter dust in the 2021 election. To begin with, she must return to the people, apologise for her government’s misrule, corruption and reign of terror to wean them away from the BJP.

While stitching political alliances and adopting new lines, Banerjee should also focus on being pragmatic. She needs to understand (the question is whether she wants to?) the need of the hour is compelling her to make more friends than foes. At this hour of crisis, she must tighten her grip over the administration to prevent the recurrence of the 2009 breakdown of law and order. All bureaucrats must be asked to prove their loyalty and must be promised better things than what the BJP is promising them. The government schemes must be implemented within time and no amount of corruption should be allowed by her.

Banerjee must remember that deprivation has instigated a major mass upheaval against her, and any form of arrogance at this point in time, any evil decisions and rigidity can cost her the position she had gained through her years of corporate-sponsored agitation politics. It’s time for her to acknowledge the prevailing unemployment problem and create jobs, create better public healthcare system and implement the pending projects. Pragmatism is a keystone of success in the darkest hours and Banerjee must not allow her arrogance and narcissism take West Bengal’s future as a hostage.

Whether Banerjee can or she can’t take a decisive step towards culminating the rise of the BJP in the state will decide her political future. She can’t immunise herself by merely hiring the famous political consultant Prashant Kishor for her 2021 campaigning. Banerjee must know that Kishore is a member of the Janata Dal (United), an NDA ally, and he was inducted in the party following the request of BJP chief Shah. Kishor’s performance against the BJP has always been weak and the BJP has better strategists, planners and executors than Kishor. Apart from that, she and her party’s ill-gotten fund, swelling through rampant corruption, extortion, big-ticket scams and syndicates, can’t match the billions that the BJP could spend in a state like West Bengal to hire manpower, guns and to incite communal riots.

Banerjee and the TMC need to go back to their roots, to the basics of people-to-people connection and must try hard to win away the majority of the common people, who have switched alliance due to Hindutva radicalisation or due to anger against the TMC’s highhandedness, through careful pursuance and by mobilising people’s movements against the Modi regime’s anti-people policies. Banerjee has always made a remarkable comeback; only time will tell whether 2021 will dig her political grave or she can become a phoenix to create history.