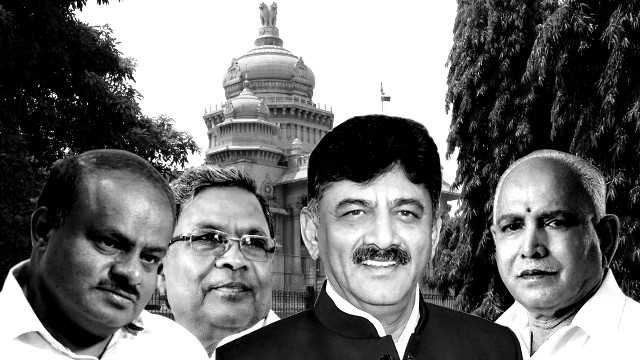 Though Karnataka Chief Minister HD Kumaraswamy and his former party colleague-turned-bete noire-turned-ally Siddharamaiah are still hopeful that the so-called “rebel” MLAs who have resigned since the beginning of July from the Janata Dal (Secular) – Congress party alliance, now with a whopping 18-member-team, will return to their parental fold at the end of the turbulent phase, the MLAs, through their collective negation of all truce proposals from the ruling coalition, and by their constant hobnobbing with the Bharatiya Janata Party (BJP) leaders, delivered a straightforward message: come what may, they will switch to the BJP once their resignations are accepted by the speaker. Kumaraswamy and his Congress partners, especially DK Shivakumar and Siddharamaiah, along with the special envoys sent by the High Command, are racing against time and trying to infuse life into an uprooted tree. They know, their coalition, an odd yet quite pragmatic alliance, formed a year ago to stop the BJP’s juggernaut in the south, is now living on ventilator of the speaker’s deliberation, while the BJP, under the utmost corrupt and cunning BS Yeddyurappa, is waiting to usurp power any moment the Supreme Court orders the speaker of the assembly to accept the resignations.

In the 224-member-strong Karnataka assembly, called Vidhana Soudha, the BJP has 105 seats of its own, while the JD(S)-Congress alliance, along with the support of the Bahujan Samaj Party (BSP) and two independents, managed to secure 119, staying above the majority mark of 113. Now that 18 MLAs have entered the “rebel” camp, including three from the JD(S), 13 from the Congress and two independents, the strength of the ruling coalition fell to 101. While the BJP is still at 105, it’s certain of two things: firstly, if a floor test happens after the speaker accepts the resignation of the 18  MLAs, then the house’s strength will fall to 206, with the magic figure to form a government reducing to 104, which it can easily show by rallying all MLAs, who are now locked by Yeddyurappa under tight vigil; secondly, the BJP will win all the legislative assembly seats once a by-poll is conducted following the mass resignations.

It’s not only the huge amount of money that the BJP had amassed during Yeddyurappa’s tyrannical rule, thanks to the notorious mining-mafia Reddy brothers of Bellary, and the huge donations that have been flowing to the BJP’s coffer ever since, rather, it’s also an incessant  intimidation of non-BJP MLAs in the state done at the behest of Prime Minister Narendra Modi-led National Democratic Alliance (NDA) government at the Union level, which acted as a catalyst in triggering a mass migration from the ruling JD(S)-Congress party alliance. It’s a speculation that Yeddyurappa, and Jagat Prakash Nadda, or JP Nadda, the working president of the party, are keen to have Karnataka in the BJP’s kitty to undo Modi’s ignominy after he lost the state to Rahul Gandhi’s alliance knitting in 2018, soon after the election results showed a hung assembly. By undoing the “Karnataka model”, the BJP wants to reinforce the writ, it’s impossible to stop its juggernaut by the combination of parliamentary, opportunist alliances.

At the very beginning, while forging an alliance with the JD(S) in 2018, the Congress party, which won more seats than Kumaraswamy’s party, overlooked all political nitty-gritty to retain its control over the state. It was at a time, when the Congress only had Punjab as a major state in its kitty, lost severely in Gujarat and failed to realise the opportunity to form a government in Goa and Manipur, which gave leeway to Amit Shah, the notorious BJP chief, to seize the momentum and usurp power in these states by knitting unusual alliances. For the Congress party and its outgoing president Gandhi, the loss of Karnataka in May 2018 would’ve meant a major catastrophe, which would have sulked the grand old party of India into an abysmal existential crisis nearly a year before the crucial Lok Sabha election. When Gandhi took the decision to offer Kumaraswamy the chief minister’s post and draw him into the alliance before the BJP, neither he nor his generals took into consideration the fact that how long would a government, surviving on the bare majority through a hodge-podge, can resist the BJP’s lucrative baits? They didn’t have a Plan B.

As the Congress party, Gandhi and his sycophants, and the JD(S) leadership were happy that they have got power wand of Karnataka, Yeddyurappa never gave up. Since the election results were out he has been involved in a murky poaching exercise to catch as many fish from the pond of the JD(S)-Congress party alliance. Knowing well about the extent of money that the Reddy brothers and Yeddyurappa himself would spend to turn the tables on the Congress, that too quickly to enjoy power for a longer duration, the Congress strategists and so-called “problem-solvers” only concentrated in wooing Kumaraswamy, tolerating his occasional tantrums, and through this they allowed the BJP a larger room for manoeuvre.

It was during the Lok Sabha election itself that Yeddyurappa unapologetically declared the fall of the Kumaraswamy regime, which means the deal to have the MLAs resign from the assembly, without triggering a volte-face to prevent legal ignominy, was concluded much earlier than the time when the first lot of “rebels” started filing resignations. Though the Congress party and the JD(S) opposed and criticised Yeddyurappa’s assertion, they didn’t carry out a thorough check at home to find the substance behind the old man’s jubilation. When the resignations started happening, the road was clear for Yeddyurappa to checkmate the coalition. Even after such a brutal humiliation, the Congress and the JD(S) refused to accept that these MLAs are bought by the BJP using dirty money, rather these two parties kept incessantly reiterating the absurd optimism about winning them back. How much more can the Congress party or the JD(S) combinedly pay for the MLAs? How much they can accommodate these “rebels” within their ranks, through ministerial berths, when other MLAs are keen to get a larger share of the power pie as well?

While travelling in a chartered plane of a BJP MP, who is also the owner of India’s most venomous Hindutva propaganda channel, staying in a BJP-sponsored accommodation in BJP-ruled Maharashtra, the “rebel” Congress and the JD(S) turncoats are still showing the audacity of denying any involvement with the BJP. They are claiming that they didn’t change their party affiliation only to avoid the ambit of Anti-Defection law; actually, these MLAs have already sealed the fate of the Kumaraswamy government and their own with a notorious under-the-table treaty with the BJP. These MLAs will definitely join the BJP officially once their resignations are accepted by the Speaker of the Vidhana Soudha. It’s most likely that almost all Congress and JD(S) MLAs who have resigned will get BJP tickets and they will be given berths in Yeddyurappa’s government.

In the present circumstances, the Congress and JD(S) can’t beat back the BJP in the game of poaching, which the saffron party has mastered well under Modi-Shah. The MLAs and MPs are mere commodities in the capital-driven sham democracy, and those who fight within their party for election tickets and spend millions to win elections, aren’t at the pedestal of power to serve the people, rather they try to enrich themselves through all possible means. Staying aligned with a party that will be invincible in Karnataka as well as which remains the single, authoritative ruling party of India, has political as well as financial advantages. The MLAs of Karnataka now know that they will remain immune from graft charges and can plunder and loot the state in connivance with the BJP’s corporate masters with utmost impunity. This sense of security is a vital motivator that helped them to switch allegiance and will continue to lure more legislators from the fold of the non-BJP parties. There is no way that the JD(S)-Congress party alliance can stop this trend and for them, the only major political response can be the mass resignation of all MLAs and requesting the governor for dissolving the assembly. If re-election takes place, the opposition must collectively boycott the polls and tell people that they are doing it because whatever may be the result, the BJP will form a government through tampering with the people’s mandate and by poaching MLAs.

Gandhi already alleged in his resignation letter that the elections in India will become more ritualistic in the future as real power remains centralised in the hands of Modi and his coterie. The oligarchy of Hindutva fanatics and their masters — the arch-reactionary big feudal landlords, the crony-comprador capitalists and foreign corporate houses — will continue to rule India irrespective of elections. Elected governments will be toppled through poaching and conspiracies, and even the opposition will be rendered toothless by the poaching drive. It will be only the BJP and it will be only Modi who will have total control over India, its resources, politics, economy and society. However, bitten by the bug of pro-corporate money-bag politics, it’s impossible for any of the parliamentary parties, including the JD(S)-Congress party coalition in Karnataka, to resist the temptation of parliamentary politics. Therefore, they will neither be in a position to humiliate the BJP by giving up the stake on power and dissolving the house, followed by a boycott of the by-polls. This incompetence, this inability to become flexible, will cost the opposition, including the JD(S)-Congress coalition a lot in the coming days.