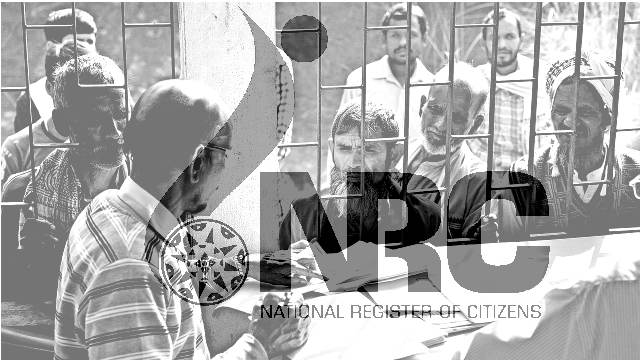 The dark clouds of a National Register of Citizens (NRC) exercise loom large over West Bengal after the Bharatiya Janata Party (BJP) won the 2019 Lok Sabha election with a landslide majority riding on Prime Minister Narendra Modi’s jingoistic cavalcade. The BJP has won 18 out of 42 seats in West Bengal, where it was earlier a non-entity and won only two seats in the 2014 Lok Sabha election. The NRC is conducted in neighbouring Assam to determine who can be called a real Indian Citizen following the infamous Assam Accord of 1985, which fixed the cut-off date for citizenship on 24 March 1971.

Anyone who can’t prove that they or their ancestors lived in Assam before 25 March 1971, can be termed as a foreigner, irrespective of whether they were born in India or their tenure of living in Assam. This model has left four million people out of the draft list of citizens prepared last year under the Supreme Court’s observation, while one million more were left out this year, as the final list is all set to be published after 31 July 2019. Unsurprisingly, most of those who are left out are Bengali people;  a large number of them are the Bengali Muslims, who are humiliated on each occasion as “Bangladeshi infiltrators” by the Indian ruling classes, turning them into a soft target, as an “enemy” of the Hindu Rashtra (the Hindu Kingdom) in the making, and the “other” who must be used as a punching bag for all government failures, socio-economic crisis, jobless growth and GDP decline. Despite being one of the most hardworking people, the Bengali Muslims have always been at the receiving end of Assam’s ultra-chauvinist political movements and suffered vilification at different levels for their socio-economic backwardness, poverty and religious belief.

Now that the BJP, following the diktats of its parental body Rashtriya Swayamsevak Sangh (RSS), is promoting the NRC concept in West Bengal, by fanning the Islamophobia embedded within the Bengali Bhadralok community (upper-caste Hindu elites and middle class) and their recent catch, the Namasudra community (Bengali Dalits), it’s quite likely that NRC will soon become a grotesque reality for West Bengal and destroy the social fabric that held together the poor hitherto. However, without an NRC exercise, it will be quite difficult for the BJP to find a secure and stable foothold in West Bengal and become an undisputed and unchallenged ruling party of the state where it had been ostracised earlier for its communal politics. NRC and the promise of citizenship to Hindu immigrants from neighbouring Bangladesh are two major weapons for the BJP to polarise voters on communal lines and also create a massive Hindu vote bank.

For the BJP, the NRC, which was initiated by its arch-rival Congress party in the 1980s, has been a boon. The RSS-led Hindutva fascist camp always advocates for the disenfranchisement of the Muslim community, calling it a necessary step to stop “Muslim appeasement” by different political parties. Though the BJP or its running labradors are unable to cite any fact or data to prove how much the Muslims of India have benefitted at the cost of the majority Hindus through such “appeasement” policy, they’ve been able to create and legitimise the myth through their malicious propaganda and bush telegraphs. Since Modi’s ascension to power, this exercise to legitimise the myth, to popularise propaganda, has taken an epidemic proportion. Now, a majority of Hindus, cutting across caste-lines, believe that the “Muslim appeasement” is anti-Hindu, yet they know not a dime about what “Muslim appeasement” is and how it has benefitted the Muslims vis-a-vis the Hindus.

In states like Assam and West Bengal, where there are a large number of Muslims, 34.22% and 27.01% respectively, xenophobia plays in favour of the BJP and helps it polarise the Hindu votes. Add to this the general hatred against the Bengalis deeply imbibed in the Assamese society, how the majority Assamese, Ahom, and other tribal communities despise the Bengali Muslims, then the BJP’s fuel for growth will be easily visible. It’s clear that the Muslims are the main target of the NRC as the Modi regime is all set to amend the Constitution and enact the draconian citizenship law, which will allow any non-Muslim residing in India as an immigrant to seek citizenship, which will save the plight of the Hindus, Buddhists and Christians termed as “foreigners” by the NRC. Only the Muslims will be left to suffer the brunt. They will be made the scapegoats to satisfy the blood lust of the upper-caste Hindu elites and middle class, who, alike BJP President Amit Shah, consider the poor, downtrodden and labouring Muslims as “pests” for the society. With disenfranchisement of Muslims, the BJP will be in a better political position in the already dilapidated parliamentary democracy.

When Modi was the chief minister of Gujarat, following the 2002 Gujarat pogrom, his government delimited several constituencies of the state in such a way that the Muslim votes became negligible in each constituency. The delimitation made the Muslims a non-factor in Gujarat politics, and ever since 2002, no political party has unapologetically spoken about the Muslim rights in the state. The mainstream parties, including the BJP’s arch-rival Congress, showed greater interest in peddling soft Hindutva, than vouching for its trademark “secularism”, as the latter has been vilified to such an extent by the RSS-BJP that any affiliation to that ideology itself is considered a taboo in Gujarati politics.

The initial success of making the Muslims a non-factor in the Gujarati politics has emboldened the Hindutva fascist camp and the experiment is now replicated in Assam, which will also be followed in West Bengal. If Muslims in these two states, highest in proportion after Jammu & Kashmir, can be disenfranchised and reduced to politically “no-body” then it will give a leeway to the BJP. The majority Hindu vote bank is already polarised and in no constituency, the non-communal forces would have any scope to defeat the BJP relying only upon the secular and democratic Hindu votes, which have shrunk to a microscopic proportion at present.

Shah and Modi are desperate to grasp West Bengal, their last hurdle in eastern India, where they want to establish the hegemony of the Hindi-speaking, upper-caste Hindu elites and middle class. This will help the BJP to officially accolade the very caste and class blocks that have helped the Hindutva camp sustain for decades in the state. The official Hindi colonisation of West Bengal will be completed only after the Bengali Hindus are rallied against the Bengali Muslim community, driven by the Hindutva fascist propaganda. This fratricide will weaken the soul and identity of West Bengal and its diverse population, rendering everything to communal binary and that’s what the BJP wants.

The NRC is nothing more than a tool to “other” the Bengali Muslims in Assam and West Bengal so that they can be easily vilified and blamed for all the socio-economic issues. If they are stripped off their citizenship rights, and the Constitution is amended by the Modi regime using the brute majority in the Lok Sabha, then they will become vulnerable to mob lynching at an industrial scale. The Bengali Muslims will be then preyed upon by Hindutva fascists and no one will take cognisance of such heinous act at an administrative or judicial level as the Indian state and all of its apparatuses have been painted saffron by Modi and his sycophants during the last five years.

To worsen the problem, no country, including Bangladesh, will accept these disenfranchised Muslims as refugees, leave alone citizens. The size of the disenfranchised people can be somewhere between five million to 10 million people, and it’s certain that no country will take them in, no United Nations or Amnesty International will come to their aid, no one will impose sanctions on the Indian government as the country remains the largest open market for foreign capital and goods. At the end of the day, it will be the Hindutva fascist camp that will benefit politically from the agony of millions of Bengali Muslims and it will be the Bengali Muslims who will be rendered stateless and rightless in their homeland by the Hindi-speaking, upper-caste Hindu elites and middle class who would like to occupy their land, assets and trades to establish their absolute hegemony on Assam and West Bengal.

The antithesis to this situation is the collective struggle of the working class, the peasantry and the toiled people against the very feudalism, comprador capitalism and foreign imperialism that are promoting the Hindutva fascist camp for their own nefarious interest. It’s only an intense class struggle for political power and economic equality by the downtrodden people, by the exploited people that the Hindutva fascist juggernaut and its conspiracy to wreak havoc on the Bengali Muslim community can be thwarted and the much-needed communal harmony can be built. But the biggest issue is, though the objective conditions for an intense class struggle against the ruling classes and their lackeys exist in India, the subjective conditions are not fulfilled, especially the need of a vanguard organisation that can thread the class struggle by the exploited people with the resistance struggle by the oppressed communities like the Bengali Muslims to defeat fascism and all reactionary forces.

To stop the juggernaut of NRC from disenfranchising, humiliating and dehumanising the Bengali Muslim community in its own land, it’s imperative that the focus is laid on building a vanguard organisation of the Bengali people’s democratic struggle, which can, on one hand, rise above the parochialism and semi-fascism promoted by the militant Bengali groups led by Brahminical Bhadraloks, like the Bangla Pokkho, and on the other hand, liberate the class struggle of the working class, peasantry and the resistance struggle of the Bengali Muslims and other oppressed people from the shackles of pan-Indianism, which causes unwanted hindrance to deal with the challenges peculiar to West Bengal and its neighbourhood.

It’s imperative for democratic, progressive and anti-fascist left forces to understand that there is no “one-size-fits-all solution” for the complex issue of Hindutva fascist aggression against West Bengal, Assam and other non-Hindi states of the northeast. Each area, each region, each district have got their unique problems and the solutions must be derived from the existing material condition of these places. Only by building up an area-wise struggle and resistance movement, taking into consideration the local challenges and contradictions, it will be possible to weaken the wings of the Hindutva fascist camp and defeat it in the political struggle for power.

An organisation that can have a wider global outlook and a deep local expertise can definitely organise the downtrodden and exploited people from Bengali Hindu, Namasudra, tribal, Bengali Muslim and other communities to build up a major people’s struggle, which can definitely thwart the conspiracies of the BJP and the RSS with strong blows in West Bengal and lower Assam. The call of the hour is to lay the foundation of such a vanguard organisation and take steps to halt the Hindutva fascist aggression. The existence of a free, progressive and democratic society, with Bengali Hindus, Bengali Muslims, Namasudras and different tribal people living in harmony, can become a reality only when the correct organisation is built to escalate the Bengali people’s cause and strive to achieve them by surmounting all odd barriers in the way.