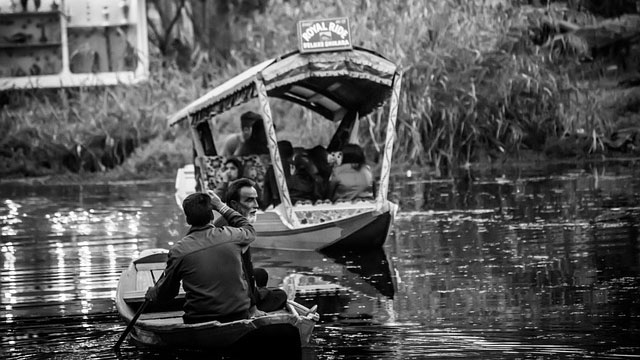 Kashmir has been the wound, festering and then healing, and festering again as governments of India and Pakistan played the game of power repeatedly, since independence. The games allowed minor victories and diplomatic moves across the board, where the losers in all these games remained the people of Kashmir. They found themselves at the receiving end consistently, their voices of protest and anger and frustration often silenced brutally or through strategies of disempowerment. Over the years, there has been a growing presence of the people, out on the streets protesting and articulating dissent, not the militants and ‘terrorists’, but the regular average human being who would otherwise prefer to live his life peacefully, with his family, enjoying a good meal and some fun moments with his friends.

With the rise of majoritarian Hindutva agenda and the BJP, things took a turn for the worse. Since 2014, efforts at peace and a conciliatory resolution to the problems the people of Kashmir has been facing started losing steam. There was a distinct shift in strategy that seemed to accept regressive methods that seek to oppress and suppress a population in order to contain dissent and acts of resistance. Several factors helped in this process, especially several mindsets ingrained in the minds of the people of the mainland.

But when the Bharatiya Janata Party (BJP) government announced the shocking decision to withdraw the special status, it was one which challenged the Constitution, the basic foundations that seek to respect the people of the nation along with the sanctity of the Constitution. When the state was divided into two union territories, it reinforced the increasing centralisation of power around the increasingly mythified figure of an authoritarian leader.

But what is of utmost concern is the silence of the Indian population. There was large scale jubilation, congratulating the government for its daring act of aggression, and display of hegemonic power. The affective politics that has been providing the BJP with all its weaponry, emerged victorious once again. Apart from a few lone voices, is there really a concern for the people who have been suffering since 5 August 2019? By repealing Article 370, dishonouring the Constitution by ignoring the provisions that were meant to prevent such undemocratic and fascist measures, disregarding the sentiments of the citizens, the government stampeded upon certain well-preserved democratic values that had safeguarded the delicate social fabric of this nation. Kashmir has been under siege since then, silent, with no communication possible with the rest of the world, and its leaders arrested and kept away from the public. But this silence from the state is not what threatens this nation and its foundations of democracy and secularism, but it is the silence of the rest of India that is violent and scary.

While the nation celebrated Diwali and every other festival since 5 August, citizens of the same nation stayed in isolation. Are we putting the people of this state to torture because they ought to be punished for being born there? The accident of birth has become the identity of these people who are going through the trauma of living in constant fear of being arrested or killed in fake encounters. There is the trauma of being confined to their homes for an indefinite number of days with long-lasting impact on their personal lives, community and the precarity of living as the Others in a nation that remains indifferent to their agony.

The silence of the Indian society is an increasingly violent one, the silence of the accomplice, the silent nod given to the aggressor, the silent partner in a crime that ought to have been challenged and resisted. The complacency of the majority, the Hindu community, denotes a characteristic shift in paradigms that define this country as a democracy that respects and accommodates, that treats its citizens with dignity and respect, as enshrined in the Constitution. The silence also reflects the triumph of the ethno-nationalist identities and the aggressive Hindu selves that were vigorously propagated through media in every form available in contemporary India. The myth of the totalitarian leader and the arrogant Hindu capable of conquering the world, rooted in a concocted past, has created a population willing to abandon basic values of compassion and human rights. Microfascism that works within the individual, through neoliberal structures that forge subjectivities that are highly individualistic, provide fertile grounds for moulding communities into silent accomplices, sometimes cheerleaders for oppressions of this kind.

Who is this new Indian? In a land where the struggle for independence was well-renowned and appreciated for the participation of its people, across class and religious and caste divides, this new India and the new Indian identity is a shockingly insensitive and callous one. The new India prefers to silently acquiesce the oppression of fellow-citizens, and congratulate the authoritarian leadership for the acts of repression against the people of Kashmir. The Muslim minority that was being targeted through mob lynching and beef ban has been further alienated from the hegemonic political powers, through this undemocratic act where the scope for discussions and deliberations has been forcibly closed with a sense of finality.

What will be the next generation of Kashmiris be? That’s a question I dread to ask myself. The young children who remain within their homes, schools closed for weeks, while the fear writ large on the faces of their family members and tales of oppression scarring their minds, will grow up to be deeply disturbed citizens. Creating apathy for the nation in which they have been born into is a dangerous proposition and every child in Kashmir living in dread will grow up with conflicting emotions of their homeland. The rituals that condition an individual to feelings of nationalist pride and belonging will be ineffectual in kids born into a state that is torn by inner strife and conflict. How will the nation address these major ailments Kashmir will encounter in the coming years, let alone the turmoil that it already is in? Who will be responsible for the turbulence ahead that will have the strength to destroy the nation and its socio-political and economic stability?

Decisions of this nature, irresponsible and manipulative, set an agenda that can destroy this nation. The violence that the people of Kashmir have been subjected to, is a precursor to the large scale violence this nation might have to encounter, in the future, irrespective of religious identities or political affiliations. Does the silent Indian from the rest of India comprehend this truth? Is he capable of such a farsighted vision?  These questions are disturbing and suggest a future that can be devastating for this nation that occupies a precarious position as a nation held together despite the pluralities and diversities that define its identity.