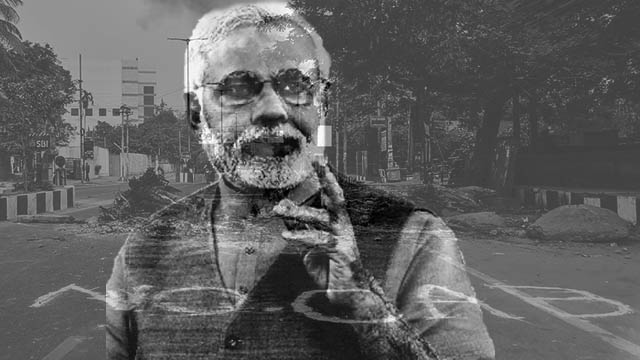 Enshrined in our Constitution is the basic tenets that this country requires to function as a democracy. It is not a document created in haste; it is a well-thought-out one, created, after several rounds of discussions and deliberations by the best minds, the leaders who had seen the harsh reality of being a colony, who were at the forefront, leading the nation to independence. The decades after independence saw the struggle that any post-colonial nation would have to undergo, confronting the aftermath of the “divide and rule policy”, the damage left behind by the colonial powers and in the case of India, acknowledging and accepting the inherently plural identities that constitute this nation. Despite all these invincible hurdles, the country thrived, grew in power and occupied a respectable position in the international scenario.

The paradigm shift began with the opening up of the economy, as the neoliberal structures that invaded the markets and lives of the people, created a whole new India. With the changing norms and values, the increasingly individualistic patterns of social relations have created a culture of selfishness and greed, the perfect fertile ground for hatred and mistrust to grow and flourish. The ruling Bharatiya Janata Party (BJP) has grown in this soil, into a gargantuan monster that feels powerful enough to alter the foundations of India. In the mass-mediated world, it is easier to perpetuate these emotions easily and the rapid dispensation of fake news and stories helps in creating this new world of affective politics.

How affective politics pave the way for the state to evolve into a discriminatory and hate-filled one? When emotions are considered as cultural practices (Sara Ahmed), with greater significance than language, they become powerful tools, easy to manipulate and exploit, if required. This politics often works around hate, a perceived threat from the “other”, creating an atmosphere of imagined fear resulting in mistrust and paranoia. In India, affective politics is at work especially directed at the Muslim community and we have been witnessing violent acts of crime directed at members of this community.

We are at a critical juncture, where the government seeks to drive the wedge deeper into the social fabric, through the Citizenship Amendment Act, 2019, and the threat of detention camps for Muslims across the country looms large. Yet, the silence of the Indian middle class is a deafeningly loud one. Apart from a few students’ organisations from a few universities, and a few liberal-minded people, the rest of India prefers to remain silent even as the state is crumbling, in every way possible. Economic policies that are intended to appeal to the emotions and sentiments of the people have been proved to have disastrous consequences. Yet the government continues to create situations which are melodramatic and sensational.

Has this government become another television serial that thrives on sentiments, melodrama and emotions? Another soap opera that is incredulous, while the public enjoys the moments that are emotional and thus creating a mind-space that is distinctly different from the actuality of life?

This drama series begins with dramatic declarations where the body of the protagonist, chiefly that of Prime Minister Narendra Modi is well-crafted and the actions and words are equally loud and visible. The declaration is followed by the responses which are fuelled by fake news websites and pages. The intrigues, the wicked plans aimed at creating suspicion and hatred are set in motion cleverly through various platforms. The leader falls silent except to create more emotional drama, with no actual discussions or explanatory statements from the authorities. The majority of the population remain silent witnesses – unwilling to respond or react – having been conditioned to watch the drama on the television without participating in it in any way. The brains conditioned to remain silent, while the drama unfolds on the screen, work in a similar pattern as the political drama unravels in their lives, deeply wounding the identity of their homeland.

The latest in the line of demonetisation, Goods and Services Tax (GST), National Register of Citizens (NRC) and other fatally-damaging decisions and policies, is the Citizenship Amendment Act, 2019, intended to create a state that is divided from within, polarised and built out of hatred and arrogance. The Act will create schisms within the society, the celebrated plurality and diversity will go for a toss, and the fragile threads of secularism that had created a conducive environment for democratic values to sustain themselves will be swept aside.

This is a symbolic gesture, the whole exercise of creating a segregated society is intended to help realise the goals of the Hindutva fascist camp, which it strived to achieve since inception. The fuelling of hatred against the Muslim community and the widely publicised acts of violence against them, the ghettoisation and segregation of the community in urban spaces, are all acted out with this purpose. The rationality is never questioned because it works within the structures of emotion and sentiments, and therefore intelligent questions are evaded through whataboutery and lies.

While Jawaharlal Nehru, India’s first prime minister, had a vision for a progressive socialist nation-state, Modi has built one on the regressive, reactionary notions of community and subjectivities. Though the government comes up with hollow promises of economic growth, gender equality and similar ones of a democratic and developmental nature, they remain promises. Apparently, Swachh Bharat Abhiyan works towards creating striking images and public relations building exercises, but major policy decisions happen as dramatic announcements delivered on public platforms. The blatant disregard for the Constitution is shocking since it blatantly announces the arrogance of the ruling powers towards a document that is held sacred in democracies.

For the BJP, the concept of India is radically different and damaging to the idea of a modern state. They have worked towards a goal since they gained power, the goal has remained the same, that of an imaginary Hindu nation, where the notions of this land are built around myths and stories carefully nurtured throughout the decades following independence. For Pakistan, no other narrative was possible without linking itself with the history of India and hence its rulers chose to identify the concept of nationhood with an Islamic identity. But why should India follow the same route when it has a varied and rich history to flaunt? Haven’t we seen enough violence and terror since the nation began on its journey towards this Hindu myth? Shouldn’t we pause, as a nation and redeem ourselves from this crazy journey towards self-destruction?