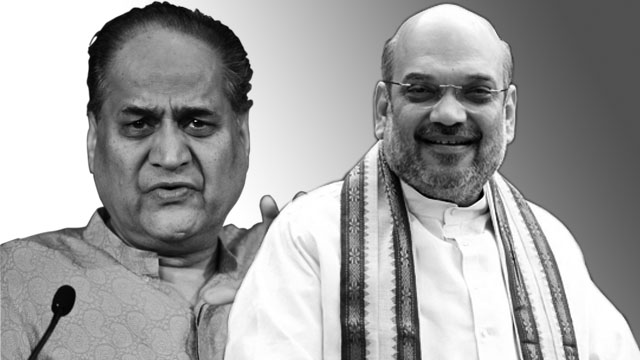 Rahul Bajaj, the Chairman of the Bajaj Group, the conglomerate associated with the legendary two-wheeler brand, is lauded by Indian liberals for questioning Union Home Minister and outgoing Bharatiya Janata Party (BJP) President Amit Shah, Finance Minister Nirmala Sitharaman and Railway Minister Piyush Goyal on the atmosphere of fear reigning in India under Prime Minister Narendra Modi‘s Hindutva fascist rule. Mr Bajaj questioned the BJP stalwarts on Saturday, 30 November 2019, at The Economic Times’ ET Awards 2019 event held in Mumbai, where the Home Minister was a guest along with the Finance Minister and the Railway Minister. Though Shah dodged the question with trite rhetoric, the utmost discomfort of the man — called “Chanakya” by his toady lapdog journalists —  couldn’t hide from the camera.

“During UPA-II [second term of the Congress party-led United Progressive Alliance], we could abuse anyone,” Bajaj said. “You are doing good work, but if we want to openly criticise you, [but] there is no confidence you will appreciate that. I may be wrong but everyone feels that.” Having said this, Bajaj also questioned the BJP over terror-accused Pragya Singh Thakur’s recent praising of Nathuram Godse in the Parliament, after she was condemned during the Lok Sabha election for the same reason when Modi claimed he won’t be able to pardon her ever for her remarks. Bajaj also cited the cases of lynchings in India, causing ignominy to the BJP chief.

Answering Bajaj, Shah refuted the allegations and said Bajaj’s ability to question him proved that no atmosphere of fear is there in India. Shah also claimed that the BJP opposes Thakur’s Godse praising. However, he didn’t say what has the government done to ensure that not just a $5.4 billion-worth renowned capitalist but also the common workers and farmers get the right to question and get appropriate answers and response from it, that the students, youth and common people can express their dissenting views and are not subjected to state terror, that the people who oppose the government aren’t gagged or jailed under false charges of sedition, that eight million people aren’t left to lurch in an inhuman 120-day-long blockade in Kashmir?

Even Shah didn’t say what exactly the BJP is going to do about Thakur, whose visceral hatred against anything remotely democratic and secular is well-known to the world. This silence endorses the view that neither the BJP approves the spirit of questioning in democracy nor it wants to do away with hardcore hate mongers like Thakur who help it in polarising the upper-caste Hindu support base using Islamophobia. Shah had to answer Bajaj because of Bajaj’s class and caste position, but he won’t respond to the answers sought by the common people of India, the people against whom the Modi regime has launched an all-out war.

These questions by Bajaj caused a smile in the face of many capitalists present in the audience who are irked by the falling economy under Modi’s reign despite having supported him in two consecutive elections expecting a higher economic turnout from his regime. Many in the press, holding an anti-BJP viewpoint, quoted Bajaj and hailed him as a daredevil in Modi-fied India, where questioning Modi and Shah can have grave consequences. Overnight, Bajaj became a sensation on social media and the liberal democrats — especially from the Congress party — left no stones unturned to praise him for his standpoint.

Though Shah refuted Bajaj’s claim, soon after the event, Bajaj became the victim of the ruling party’s concerted vitriolic spree. On social media, the BJP IT Cell, lead by its chief Amit Malviya, attacked Bajaj, calling him Congress party’s stooge. Sitharaman, Union minister Hardev Puri, etc, took the turn to lambast Bajaj for daring to question the government and asked him to be thankful that he could question the Union home minister. Such vitriol and innate hatred towards anyone who asks an uncomfortable question proved why Bajaj’s allegation wasn’t baseless, but very much true.

It indeed takes a lot of courage to question the Modi regime, something that the press has conveniently shunned since 2014 to remain in the good book. Still, Bajaj questioned Shah about the situation, showing courage in his 80s, something that many in the zenith of their youth won’t dare. Yet, despite this valour, Bajaj didn’t lead a rebellion by questioning Shah and the Modi regime, neither his questions came from any love for democracy and accountability or from any form of opposition towards the Hindutva fascist ideology.

Bajaj, an upper-caste Marwari, belongs to one of the privileged comprador families of India from the top 1% strata that own 73% of India’s wealth. Bajaj is the grandson of Jamnalal Bajaj, the founder of the Bajaj group and a close associate of MK Gandhi. The Bajaj Group is a leading corporate house in India, which flourished during the Congress party’s rule and still hold a considerable share of India’s two-wheeler market and financial market. Despite the family linkings with the Congress party, Bajaj didn’t shy to join hands with the BJP whenever it suited him. Bajaj was elected to the Rajya Sabha from Maharashtra in 2006, supported by the BJP, the Shiv Sena and the Nationalist Congress Party. Oscillating between far-right and centre-of-the-right, Bajaj, like any typical comprador capitalist, choose to side with convenience.

In January 2019, when Bajaj was attending the funeral of noted Gandhian and former acting chief justice of the Bombay High Court, Chandrashekhar Dharmadhikari, in Nagpur, he was invited to visit the headquarters of Rashtriya Swayamsevak Sangh (RSS) — the ideological mentor of the BJP and the fountainhead of Hindutva fascism — to meet the supreme leader of the organisation and the Modi regime, Mohan Bhagwat. Due to unavailability of flights and his busy schedule, Bajaj told the city RSS leader Rajesh Loya, who invited him to the RSS headquarters, that he will visit later.

In September 2019, Bajaj made the trip to Nagpur’s RSS headquarters and paid tribute to the memorials of two prominent leaders of the Hindutva fascist pantheon — RSS founder KB Hegdewar and his successor MS Golwalkar — whose ideology of hatred, bigotry and violence rule India as the guiding ideology. He met top RSS functionaries, except Bhagwat who was out of town then. Bajaj became one of the few prominent people who visited the RSS headquarters in recent years and eulogised the utmost Brahminical fascist organisation. His visit was seen as an attempt of rapprochement towards the Hindutva fascist camp, especially after the Modi regime’s policies ruined the fortune of the automobile industry in India.

Though Bajaj showed the courage to question the government at the age of 80 in a packed hall, it must be remembered that he isn’t a harbinger of a revolution but is only expressing the frustration brewing within a large section of the Indian comprador capitalists who have been angered by the Modi regime’s selective corporate appeasement policies. Though Bajaj Group’s market capitalisation and growth increased from Rs 763.22 billion during the UPA II reign to Rs 3.62 trillion under Modi, it’s the latter’s economic policies that have been hurting the core businesses of the group lately, forcing Bajaj to criticise the government despite being a beneficiary of Modi’s largesse.

Under the Modi regime, only a handful of comprador capitalists and their foreign masters have gained a lot. The Mukesh Ambani’s Reliance Industries, Gautam Adani’s conglomerate, and few other business houses, headed by Modi’s top donors, gained immensely from his regime’s policies, its privatisation drive, its enactment of anti-labour laws and the freedom provided to plunder the public and natural resources. As the automobile, including two-wheelers sector, and the financial sector went into a severe crisis, it’s clear what irks the octogenarian capitalist and his silent supporters.

This sheer selective corporate appeasement by the Modi regime, the utmost disregard for the capitalists who aren’t in the league and then unleashing tax terror on them who don’t budge, annoyed the majority of comprador capitalists, especially after the economy started nosediving and unemployment skyrocketed when the government focused on Hindu-Muslim dichotomy and to fan communal hatred and xenophobia. Bajaj questions or opposes the government because of the BJP’s nonchalant attitude towards economic issues, as they impact capitalist profiteering.

When Bajaj got elected to the Rajya Sabha in 2006, he took help of the BJP that was accused of the 2002 Gujarat pogrom and the Shiv Sena, a far dangerous Hindutva fascist outfit, was accused of the 1992 pogrom in Mumbai and of the Babri Masjid demolition. He didn’t shy from taking the support of these outfits to reach the parliament, even being a man from the family with close Congress party ties. The sheer opportunism of Bajaj resembled that of the majority of those comprador capitalists who helped Modi and the BJP rise to the higher echelon of power and demolish the space for dissent and democratic discourse in India. The same bunch of capitalists are now suffering due to the injuries they inflicted upon themselves and there is now no respite in view.

Bajaj’s criticism and questioning of the Modi regime won’t bring any real, materialist and qualitative change in the Indian political space. Neither it will help to defeat the BJP and the RSS, nor will it empower the people. Bajaj could criticise the Modi regime and get away with that, except some vitriol, because he is a capitalist, the man with the moneybag, whom the BJP or Shah won’t dare to harm directly due to the fear of reprisal from the entire class. The horizontal division within the Indian ruling classes triggered by Modi’s unbridled rule and unapologetic appeasement of Reliance or Adani Enterprises is the root cause of the outpour of frustration by people like Bajaj. The BJP, which needs money from people like Bajaj, won’t be able to publicly gag them but will use the state machine, especially tax authorities, to exert pressure and retain the environment of fear.

Under no circumstances, these capitalists like Bajaj can bring any positive political change to India. It’s India’s workers and peasants, who fill the coffer of the likes of Bajaj, who will bring the real, revolutionary and radical change by bringing down the Hindutva fascist empire of Modi and his coterie. The focus of the anti-fascists, the progressive and democratic forces should, therefore, be upon educating, arousing, uniting and organising the poor so that they can play a pivotal role in the upcoming nationwide anti-fascist, anti-Hindutva, anti-communal and secular movements against the Modi regime. Capitalism can’t end fascism that protects its own rule; it’s only the anti-thesis to capitalism, ie, the working class, and its allies — the poor and the oppressed people — who can defeat fascism. It’s imperative that we don’t lose focus from this basic truth at a time when narratives are set by the corporate-controlled press to make heroes out of capitalists like Bajaj. Such distractions can be fatal in the long run.