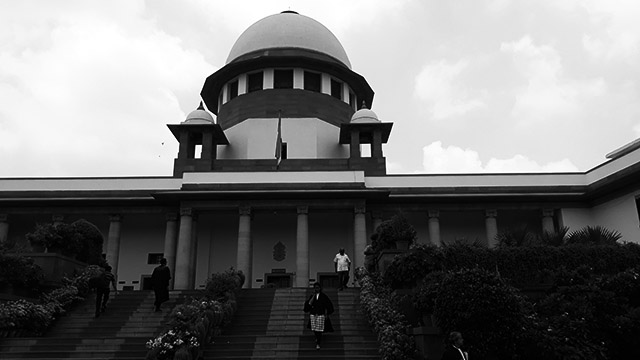 There are a large number of people who have been pinning their hopes on the Supreme Court to quash the contentious Citizenship (Amendment) Act, 2019 (CAA) and the notorious exercises like the National Population Register (NPR) and the National Register of Citizens (NRC) as planned by Prime Minister Narendra Modi’s dispensation led by his Bharatiya Janata Party (BJP). However, it’s unlikely that the Supreme Court’s CAA hearing will cause inconvenience to the Modi regime and its Hindutva fascist agenda. The refusal of the Supreme Court to stay the contentious law, despite more than 140 pleas filed, both opposing the law and in its favour, shows a glimpse of the fate of litigants expecting the judiciary to ring the death knell of the divisive law that violates India’s Constitution.

Even after India’s formation as an independent nation after partition, the colonial judicial apparatus continued to operate with impunity, with cosmetic changes in nomenclature, without undergoing any revolutionary transformation. The British colonial Federal Court was renamed Supreme Court, with colonial administration’s judge Justice HJ Kania becoming the first Chief Justice of India (CJI). The shell partially changed, the core didn’t. It’s a reason that the colonial practices still reign in the Indian judiciary and it continues to act as a pawn of the ruling classes, providing much-needed leverage to the oppressors, the exploiters, the big comprador capitalists, feudal landlords and foreign corporations, while acting against the marginalised, exploited and oppressed classes and sections of the society.

No wonder, the Indian judiciary is always dominated by upper-caste Hindu elites. The lack of proper representation of Dalits, tribals, oppressed minority communities and women, made the judiciary a part of the hyper-masculine Brahminical cavalcade, which was called “secularism” by the Congress party and the Indian ruling classes before the meteoric rise of the BJP and the Rashtriya Swayamsevak Sangh (RSS) — the ideological wellspring of Hindutva fascism — in the Indian political theatre. One must remember that the Supreme Court and the Indian judiciary has always compromised on the core ideas of secularism whenever it faced Hindutva as a contender.

Nothing can prove it best than the Hindutva cases —  a collection of 10 separate cases, whose major ones are Prabhoo vs Kunte, AIR 1996 SC 1113; Kapse vs Singh, AIR 1996 SC 817; and Joshi vs Patil, AIR 1996 SC 796 — in which the Supreme Court’s verdict said: Hinduism should be “understood as a way of life or a state of mind and it is not [to] be equated with . . . religious Hindu fundamentalism.” (Prabhoo vs Kunte, paras: 39 to 42) giving a leeway to the Hindutva fascist forces to seek votes in the name of Hinduism.

Even the 2001 Parliament Attack case judgment clearly showed how Hindutva fascism has permeated deep inside the veins of the judiciary. The Supreme Court agreed that the evidence against the prime accused Afzal Guru was circumstantial and stated: “As is the case with most conspiracies, there is and could be no evidence amounting to criminal conspiracy.” Having concluded that, the judgment suddenly went on to say: “The incident, which resulted in heavy casualties, had shaken the entire nation, and the collective conscience of society will only be satisfied if capital punishment is awarded to the offender.”

Guru’s accusations came true nearly after seven years of his execution, as the police officer he accused of forcing him to take one of the suspected attackers to Delhi, has been arrested by the Jammu & Kashmir Police while allegedly ferrying two Hizb-ul-Mujahideen militants to Delhi in January 2020. Yet, even after the fact that Guru’s version, which was mentioned in a letter to his counsel Sushil Kumar, could be correct, the former Justice SN Dhingra, who sealed Guru’s fate, refused to change his judgment if given a chance today.

With the ascension of Modi to power in 2014, after being favoured by the judiciary in cleansing the bloodstains of 2002 Gujarat pogrom on his sleeves and hands, the judgments on crucial cases, be it the investigation into the mysterious death of Justice BH Loya, the controversial Rafale Jet scam verdict even after the BJP’s faux passe and sheer lies were exposed when grammatical changes were suggested by the government to the Supreme Court after it dismissed the pleas calling for an investigation, the Ayodhya verdict, etc, have shown how severely has the judiciary’s sheen of autonomy and impartiality eroded.

Even though former CJI Ranjan Gogoi took part in an unprecedented press conference with three other Supreme Court judges against the former CJI Dipak Misra during the fag end of his tenure, with his ascension, Gogoi didn’t stand to the expectations. Now with CJI Sharad A Bobde at the helm, a man who placed emphasis on citizen’s duties than rights and declined to hear a plea on police violence against students of Delhi’s Jamia Millia Islamia and Aligarh Muslim University, putting the onus of stopping violence on the victim students, it’s unlikely that the Supreme Court’s CAA hearing will cause any ignominy to the BJP and the RSS.

When the Modi regime will file its response in a month’s time, the Supreme Court’s CAA hearing will start and it will not place the case on a fast-track mode unlike the Ayodhya dispute, which had the luck to go through a marathon hearing. The protests on the streets, which are contended by the upper-caste Hindu supporters of the BJP to incite communal tensions, will definitely be condemned by the apex court due to the participation of the Muslims. It won’t take months to decide on the protests. Before the Supreme Court’s CAA hearing, the judgment on evicting protesters with brute force will help the Delhi Police, Uttar Pradesh Police and the state apparatus in various BJP-ruled states to unleash terror against the peaceful protesters fighting against the obnoxious agenda of the Modi regime.

In such a situation, the political maturity shown by the protesting Muslim women is praiseworthy. Soon after the stay on the law was rejected during the Supreme Court’s CAA hearing, the women reaffirmed their determination to continue the movement until the government budges. This disillusionment with the bait of judicial remedy to a legislative crime is a welcoming move in India, where reformism and the mirage of constitutional comforts have long helped the ruling classes and the liberal democrat enablers of fascism to hoodwink the people.