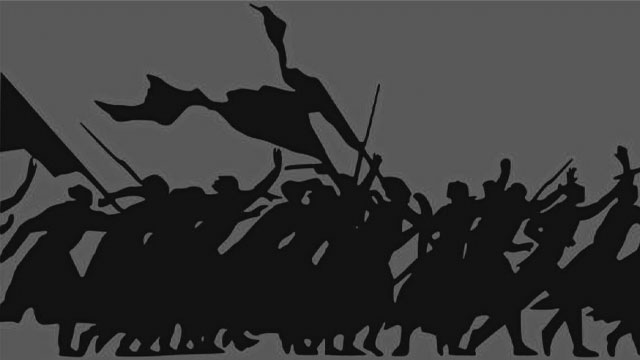 ‘Gar firdaus bar-rue zamin ast, hami asto, hamin asto, hamin ast‘ – Yes, there is heaven on earth and it’s here, amidst the struggling masses. It’s indeed a productive time we are writing history from different locations of the yoke when worldwide anti-fascist struggles are in bloom. Heroic people of  Bolivia, Chile, Ecuador, France, Haiti, Holland, Indonesia, Iraq, Italy, Lebanon, Peru, Spain, etc, are fighting for a right to dignity. Dignity at the workplace, a dignified life after reaching home. A common factor popping up at times weaving the issues of worldwide revolt is nothing but the economic distress the working class is subjected to. Be it fuel subsidies cut or abnormal hike of public conveyance fare, issues that touch the lives of the working class and toiled people deeply are forcing them to choose rebellion rather than status quo. The working class’s movements against fascism are deeply connected with the burden of the neo-liberal economy’s exploitation, imposed upon their shoulders by the ruling classes in these countries.

The nationwide mass upheaval against the contentious Citizenship (Amendment) Act, 2019, or CAA, brought by Prime Minister Narendra Modi’s government, along with the National Register of Citizens (NRC) and National Population Register (NPR) is unparalleled in the history of the country after its so-called independence from British colonial rulers. But this spur won’t survive for long until the people are politicised to ensure they channelise their vigour, vitality, enterprise and genuine democratic zeal towards a meaningful transformation of the existing fascistic order. Since any politics is a concentrated form of the prevalent economy, we can’t only rotate our narrative around preserving the Constitution and democracy. Unless the reformist filth is purged from these unprecedented mass movements and they are connected with the working class’s movements against fascism, there are fewer chances for spontaneous movements with multiple stakeholders to sustain for a longer period.

Let’s imagine, for a while, that a satellite is capturing our map from birds’ eye view at present when the people are rising up and exhibiting dissent on the streets. There will be only countless human dots spotted across the rivers and mountains. As the Hindutva fascist Modi regime has speeded entrenching its venomous claws towards building up a new post-war map, it’s bound to legitimise their hostility on us. To divide the people, the Modi regime has introduced multiple acts to segregate and disenfranchise India’s Muslim citizens.

The Hindutva fascists have played extensively on Islamophobia prevailing among the majority community’s upper-caste elite and middle class blocks, whose representatives had voted Modi and his Bharatiya Janata Party (BJP) to power.  Ironically, the dream sold to millions of unemployed was not of employment opportunities, but the pasture of a Hindu theological state — Hindu Rashtra — where the hegemony of the upper-caste elites will be consolidated officially. The Modi regime is trying to use the dream of a Hindu Rashtra to rally bamboozled followers from the middle class and the lower-income groups of upper-caste Hindus behind itself. Only the working class’s movements against fascism can be a true antidote to this venomous serpent at present.

The acts and schemes introduced by the Modi-led Hindutva fascist machinery are violating the so-called sanctity of the ‘Indian Constitution’, the guide to action for India since it adopted the book in November 1949. There is evidence of a deep economic crisis that the foreign monopoly-finance capitalist blocks have vexed to shift on the shoulders of common people. Globally, the monopoly-finance capital couldn’t recover from the deep crisis it got quagmire in 2008, following the American subprime crisis. The failure to recover themselves intensified their crisis and the absence of lucrative bubbles of opportunity, where they can invest and mint money through speculations, forced these big corporations into a panic mode and to recover their losses they looked up to the government funds meant for public expenditure.

Corporations and capitalist pundits who have vehemently opposed the state’s role in the economy and criticised the state’s interference through crucial public services like public healthcare, public education, public transport system, water supply, municipal acts, etc, didn’t shy to demand money from the public exchequer to bail out themselves from bankruptcy. To smoothen the loot and plunder of public exchequer and to gag the marginalised and exploited people’s voices, these corporations promoted their utmost fascist lackeys globally to usurp power. From Donald Trump to Boris Johnson, from Jair Bolsonaro to India’s Modi or Turkey’s Recep Tayyip Erdoğan, fascists who are good in spreading xenophobia and consolidate the privileged, elitist sections of the society as their loyal supporter, as well as wean away a section of the working class from the trade unions and left blocks, got the backing of Wall Street, Pentagon and Langley in their political endeavours and usurped powers of crucial economies. This made the working class’s movements against fascism quite a mandatory affair globally.

In such a scenario, looking into the Indian incident, from Modi’s rise and continuous rise to the toxic Hindutva fascist propaganda getting mainstream, shouldn’t be done in isolation. India should be seen as the haven of corporate loot and plunder. Its subsequent rulers have always provided unbridled access to big capital, foreign and domestic, to exploit the people, to seize their water, forests and land; still, Modi is chosen as the capitalists aren’t free from the crisis and need a total solution to their greed for the lucrative resources and labour of India. The NRC, which was mooted in the Citizenship (Amendment) Act, 2003, is actually a mechanism to strip the poor, vulnerable masses off their identity, to disenfranchise them and then turn them into cheap labour pool for corporate houses.

It’s only the working class’s movements against fascism, Hindutva fascism, with a goal of radical transformation and establishment of a people’s democracy that can bring a real, substantial change in the political and economic space. Therefore, the working class needs to be engaged to revolutionise a spontaneous wave of people to learn together, that irrespective of their religious identity, the masses need to fight Hindutva fascism, which is actually a servile lackey of the neo-liberal economy and strives to sell human labour at a cheaper price for profit maximisation, privatise all enterprises, sectors and plough this country only for the extreme rich, while murdering the common mass with total impunity.

While fighting Hindutva fascism, one also must remember that this enemy is not on its own. Apart from being supported by corporate funding, both foreign and domestic, these sly and bestial maniacs are also supported by their hidden allies — the social democrats (parliamentary left), the rightwing democrats, so-called liberals and vacillating entities that swear allegiance to the Constitution — who can at times appear as loyal allies of the people on the street. Thus, one can find Rahul Gandhi and Sitaram Yechury delivering fierce speeches on CAA in Guwahati, Assam, but remaining conspicuously silent over the issue of NRC in which 1.9m poor Bengalis and other people have been excluded and are rendered stateless. Their vote bank compulsions make these so-called opposition politicians do a balancing act through political acrobats. They were not, they aren’t and they won’t be allies of the working class in the struggle against Hindutva fascism.

It’s time the working class’s movements against fascism connect the dots of the anti-NRC and anti-CAA movements waged by the common people, the students and youth, the marginalised Muslims, the oppressed communities and play the pivotal role, gradually. The integration of the anti-NRC and anti-CAA movements, which the Modi regime is trying to push to the oblivion, with the working class’s movements against fascism, waged through different platforms and on different issues can become a lethal threat to the Indian Hindutva fascist regime of Modi. Rather than running behind the mirage of fixing the flaws of the system using a constitutional mechanism or doing an elite man’s politics of balancing, it’s imperative to lead the people on the path of a total transformation through effective intervention.