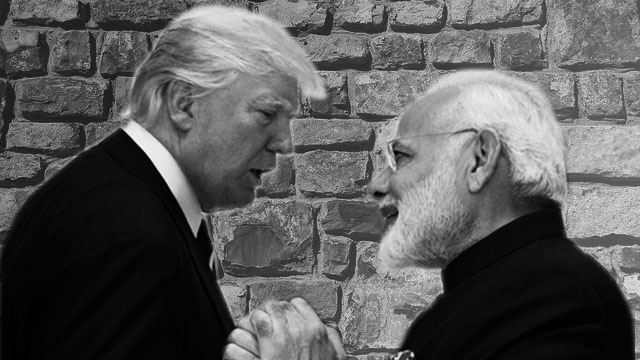 The Ahmedabad Municipal Corporation (AMC) constructed a wall to conceal the Saraniyavaas slum, with nearly 500 shanties and an estimated population of 2,500, which falls on the proposed route of US President Donald Trump’s cavalcade from the Sardar Vallabhbhai Patel International Airport to the under-construction Motera Stadium. Though it’s called an attempt to “prevent encroachments on footpath & road” by AMC Commissioner Vijay Nehra through a tweet, and though the Ahmedabad Mayor Bijal Patel of the ruling Bharatiya Janata Party (BJP) denied any knowledge of the wall, the democratic voices have called the Ahmedabad wall to hide the slums as a frantic attempt to prevent the foreign lenses capturing the glaring poverty and wealth inequality that reigns in Gujarat, Prime Minister Narendra Modi’s home state.

Before becoming India’s prime minister in 2014, Modi remained Gujarat’s chief minister from 2001 to 2014, and he used to sell the “Gujarat model” of development as his unique selling proposition during the run-up to the 2014 Lok Sabha election. The euphoria of the “Gujarat model” didn’t last long as soon after ascending to power Modi unleashed a reign of corporate appeasement, liquidating all public assets to help the big crony-comprador capitalists profiteer. To cover up the debauchery, the BJP and its parental body Rashtriya Swayamsevak Sangh (RSS) rolled out a reign of terror on the Muslims of India, the largest minority community with 200 million members, to extremely polarise the majority Hindu society and distract public attention.

Modi’s hyper-marketed “Gujarat model” died-down by 2015, and when the Gujarat Assembly election 2017 took place, none of the BJP leaders uttered the “Gujarat model” before the electorate. The BJP’s campaign was strongly communal and tried to unite upper-caste Hindu elites and middle class Gujaratis who form the core of the party’s support base in the state. Throwing the “Gujarat model” in the oblivion the BJP has moved so far that it forgot that building the Ahmedabad wall to hide the slums behind is actually a mockery of that very model.

Trump’s penchant for a discriminatory wall isn’t unknown. He wants to construct a massive wall at the Mexican border and even exhibits the arrogance of asking Mexico to pay for this wall. The Ahmedabad wall to hide the slums wasn’t built by penalising the slum dwellers to punish them for their poverty. The Mexican wall’s miniature in Ahmedabad won’t make Trump unhappy. After all, it’s something that synchronises Modi’s and RSS’s Hindutva fascism with Trump’s white-supremacist fascism. The xenophobia exhibited by Trump against Mexicans and Muslims resonates perfectly with the Islamophobic jingoistic politics of Modi and his followers.

Trump is excited about a roadshow with Modi before going to see the Taj Mahal on 25 February, the last day of his two-day India tour. He is least bothered, like any other US presidents, for the poor of India because as long as the poor in India remain powerless and voiceless, the American corporate houses can have an upper-hand in dominating the Indian markets, while exploiting Indian labour and plundering its natural resources. As long as the jingoistic, skewed nationalism of the RSS will survive, the American military-industrial complex will be able to sell their hardware to the Indian military.

What’s necessary today is to not harp the hope of Indian people’s liberation from fascism on the goodwill of the American libertarians — and Trump is, thankfully, not one — as both the Democrats and Republicans will continue to endorse Modi’s Hindutva fascism, as long as the US interests are given priority in the policy decisions. The Ahmedabad wall to hide the slums is actually going to please Trump, not because he or the Americans won’t know what’s behind it, but because the Modi regime is able to ensure that the poor are shown their place and rendered powerless to act against US imperialist interests. Smashing the wall of fascism must be the people’s priority now.