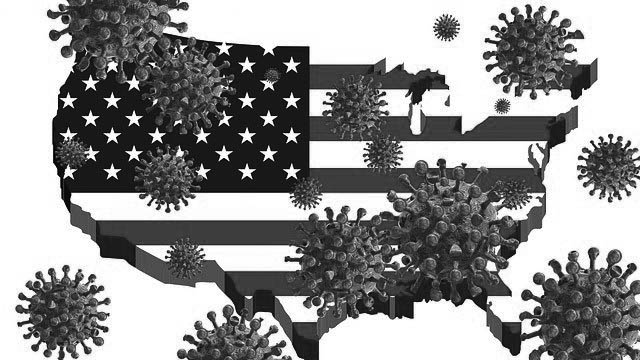 Human civilisation is like a rolling stone. It has been rolling since its inception on bumpy roads. The impediments come in due course and make civilisations think and introspect. These temporary pauses halt the speed of the civilisation to give chances to correct mistakes and make it ready to function effectively in the future. These bumps are the pandemics that reshape, remould the world and bring drastic changes in all spheres of life, mostly for the common good.

The recent outbreak of Coronavirus (COVID-19) has held a mirror before the world and we can see a selfish, lonely Goliath, in the reflection, taking every measure to dig his own grave.

The reflection of failed capitalism on COVID-19 mirror:

The world was more or less on equilibrium until the arrival of COVID-19. Since its arrival in December 2019, it has been unfurling the flaws of countries, layer after layer, which were concealed beneath the sheen of capitalist galore and from which the people’s attention was distracted using the subterfuges like nationalism, bigotry or by using hyperbolic narrative. The so-called developed countries like Germany, Italy, Spain, the UK and the US, idolised by many until a few weeks ago as lands of possibilities, have fallen on the ground due to the COVID-19 berserk.

This situation asks the important question, which has been asked several times by a large number of people in recent times on different occasions — is capitalism falling? Is this the end of capitalism? Is it a virus that will cause the predatory system to collapse or will the working class? It’s too early to come into a conclusive decision on this but it’s certain that COVID-19 is rupturing the air-balloon of global monopoly-finance capitalism that always puts profit over human lives.

The reflection of the big bully USA on the COVID-19 mirror is like the lonely selfish giant, who does not make friends but only profit, dying with so many dollars in hands but no one to give it a drop of water to drink.This capitalist God is shuddering at the jolt of the COVID-19 attack. This warmonger’s economy didn’t make hospitals, medical infrastructure, ventilators, critical care units, epidemic handling capacities but sold health insurances, that too to the minuscule part of its population, leaving the majority of the people to die due to the skyrocketing price of private healthcare.

The American health insurance depends on private providers and thus gives the corporate-sponsored plans better opportunities in treatment than those who don’t have corporate insurance or no insurance at all. Before the Affordable Healthcare Act, almost 25% of Americans had little or no health insurance at all. As a result of this, many people died each year because healthcare remained unaffordable for them in the US. Just for demanding free medicare for all, Democrat candidate Bernie Sanders was vilified and demonised as a monster by his own party people.

The monopoly-finance capitalist economy didn’t think about the importance of public healthcare. Rather it willfully neglected the dire need of the American society. The notorious US military-industrial complex led them to manufacture more weapons than medicines and medical equipment. The capitalist economies of the west and their lackeys in the global south have been able to make money out of this but they failed to secure the lives of people. Now the US, which earned notoriety by bombing, nuking and gasing people all over the world, killing millions, is suffering due to a huge shortfall of life-saving equipment to fight against COVID-19.

Famous author and capitalism-critic Arundhati Royrightly says, “If it were not masks and gloves that its frontline soldiers needed, but guns, smart bombs, bunker busters, submarines, fighter jets and nuclear bombs, would there be a shortage?”.Busting the development myth, The Guardian reports there are 2.9 hospital beds for every 1,000 people in the US, worse than countries like Turkmenistan, Mongolia, Argentina and Libya. This El Dorado, as people of most of the developing countries think about the US, has only 2.6 doctors per 1,000 people with a higher maternal mortality rate than Iran or Saudi Arabia.

This imperialist monster has higher inequality than countries like Mali or Yemen. In securing the interests of the big corporates, the US failed in providing security to the people. Despite being at the risk of getting infected, millions of Americans have no option left but to go to work. The lack of paid sick leaves and the fear of losing a job is forcing them to jeopardise their own lives as well as increasing the chance of community transmission of COVID-19. According to the Federal Bureau of Labor’s statistics, roughly 33.6m people don’t have sick leave. The newly passed “Families First Coronavirus Response Act” has failed to include all sections of the people in its ambit. Almost 16.8m people have lost their jobs in the last three weeks.

The white supremacist capitalism has only widened the inequality and the outcome of this severe inequality is devastating for the people of colour living in the US. Till April 9th, people of colour are almost 42% of the total COVID-19 deaths while they consist 21% of the total population of the areas covered in the study. Low wages, structural marginalisation, less access to healthcare, large involvement in essential jobs like food services, cleaning, etc, with pre-existing health conditions due to inequality have made them easy prey for the COVID-19.

So when the monopoly-finance capitalists face a real threat, other than conventional wars, they fight against their imaginary enemies. The US healthcare system collapsed so irrecoverably that there’s no clarity among the stakeholders over what to do and, even after such failure, the imperialist chieftain shows no scaling down of arrogance or rhetoric and keeps on issuing threats to other countries, enforce sanctions and cut funds to the World Health Organization.

A racist bigot like Donald Trump and his sycophant American leaders are clearly hearing the death knell of the economy. Their arrogance and the calculation of human lives in the weight scale of profit and loss made the US the largest COVID-19 epicentre, with thousands dead. And as the bodies are piling up in the cemeteries, the arrogant and selfish capitalist God doesn’t even have enough grave diggers to bury the dead. As per a report of The Intercept, prisoners are hired to dig graves!

As the situation is worsening, the grotesque skeleton of the predatory capitalist system is becoming more prominent. It is now walking in broad daylight on the nerve of the economy. It’s indeed a million dollar question whether the common people will kill the giant or the capitalist soccers will give this blood-sucking vampire which the Trump administration is already giving by injecting a huge amount stimulus in the economy, a new garb to rob the people under a new name as these crony magicians have been doing since the birth of this monster. The Payroll Tax Cut will further lead social security to a debacle.

Even in such grim times, the crony capitalists are trying to make money. The steep rise in the prices of essential commodities clearly indicates this fact. Are we heading towards disaster capitalism by using the shock wave of COVID-19? According to Naomi Klein, this may be true. It’s too early to predict what lies ahead. It’s the people who have to decide whether they are ready to buy their breath — as the capitalists are now eyeing our natural resources — by letting the unbridled capitalist horses run the economy or whether they will kill the giant? But the mighty rulers and oppressive systems have always been defeated by the voices of the oppressed people. So history is in favour of the people of America. They have to rise and ring the death knell of this dying monster. The solution is to fight, fight and fight against this dying giant with a robust welfare system of economy and who doesn’t know only Karl Marx has the answer.