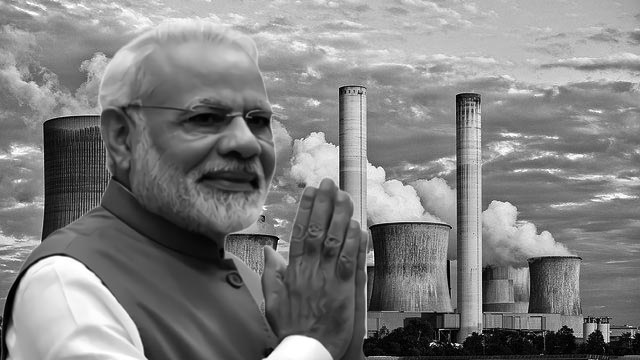 Prime Minister Narendra Modi stressed on building “Atmanirbhar Bharat” (self-reliant India) during his televised address to the nation on May 12th 2020. Modi’s plan for “Atmanirbhar Bharat” and his advice to be “vocal for local” brands may sound to many as a reiteration of the rhetoric that the Swadeshi Jagran Manch – an affiliate of Modi’s parental organisation Rashtriya Swayamsevak Sangh (RSS) – made during the 1990s, it’s not so. The “Atmanirbhar Bharat” isn’t about making India self-reliant in the production of everything it needs, buying from indigenous producers and boycotting western goods. It’s about turning India into a foreign capital-dependent production hub in the most uncertain times.

With his plan to turn India into a so-called self-reliant country, Modi also announced plans for “bold reforms” to strengthen the pillars – economy, infrastructure, system, demography and demand – of this “Atmanirbhar Bharat”. Modi’s “bold reforms” declaration and his proposal for a financial package for India’s economic revival are lauded by his crony-comprador capitalist patrons like Gautam Adani. The reason is obvious.

So, what will be Modi’s proposed “Atmanirbhar Bharat”? Will it be a country that will have its own free capitalist setup manufacturing everything locally and its capital accumulation making its capitalists as powerful as the Americans? No, certainly that’s not what Modi is planning. He clearly mentioned he won’t go out of the globalisation ecosystem of the World Bank, International Monetary Fund and the World Trade Organization (WTO). Which means, the self-reliance will be nothing more than wooing the big foreign capital to invest in India and to provide financial stimulus to the Indian crony-comprador capitalists to set up factories to which foreign corporations can outsource their manufacturing orders.

Can India actually become a manufacturing hub with the help of fiscal stimulus? Modi tried this in his first year in office by rolling out the Make in India programme, which failed. The Startup India programme also didn’t work. The average ticket size of MUDRA loans offered mainly to the medium, small and micro enterprises (MSMEs) has been below Rs 50,000 and it didn’t allow the youth to become self-reliant. The revival of the Make in India programme when capital’s trend is to get parked in unproductive and highly speculative acts to profiteer, won’t provide relief to the poor and the needy.

Right now, when the unemployment rate is at 24% and labour participation is 37.6%, the MSMEs can’t be an engine of change. They won’t be able to utilise the available credit when the entire supply channel is disrupted, and labour has been fleeing to rural India. The MSMEs’ capacity isn’t as big to absorb the stimulus announced by the government, and at a time of falling demand, along with falling supply, it won’t be a wise decision for the small business owners to further increase their debts. This means, the new stimulus packages, especially rate cuts and easy loans will be used by the likes of Adani and Ambani, causing immense harm to the already-sickened Indian banking system.

If the money from public exchequer goes to the corporate houses, then the crisis-ridden capital will be able to heal itself to some extent, though not fully. However, there is no guarantee that the money will return to the market for investment in employment-creating opportunities. As unemployment increases, the lockdown relaxation won’t resume normal economic functions anytime soon, as a large number of people can’t even afford to return to cities and restart their lives. The crisis in both demand and supply lines aren’t resolved through any planned approach.

Taking a leap towards building global brands out of local units and becoming a cheap labour-driven manufacturing hub, the actual objective of the “Atmanirbhar Bharat” programme, won’t materialise in this way. The US corporations that had earlier invested in China are either going to stay ignoring Donald Trump’s tax threats or some of them may move to cheaper locations like Thailand or Vietnam. But India, which is still far behind in infrastructure and has to depend on imported components from other South East Asian countries for its assembly lines, can’t overnight become a hot destination.

“Atmanirbhar Bharat” is merely another obnoxious propaganda of the Sangh Parivar, which itself is an agent of foreign imperialism, that won’t ever free India from the shackles of globalisation and liberalisation, rather tighten the neo-colonial noose around the neck of the poor. It will open the doors ajar for big foreign capital to occupy India’s pristine forests, mountains, rivers and agricultural land. India’s journey towards actual real self-reliance can’t happen with foreign capital’s assistance. Such a journey can be traversed only by breaking free from the imperialist chains of neo-liberal economy, to which Modi and his coterie swear allegiance to.