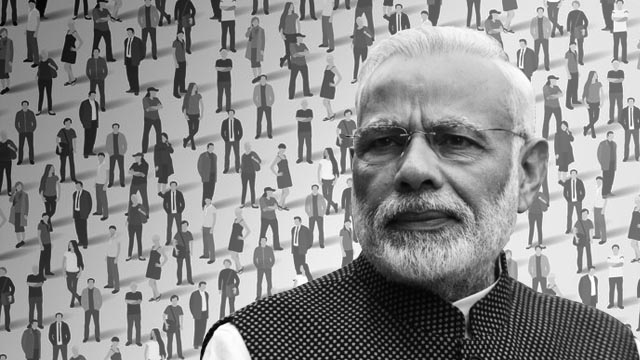 The leader spoke again on May 12th; he addressed the nation attired in impeccable style and I couldn’t help notice the new sartorial addition since the pandemic, a bright coloured cloth, like a cotton shawl, covering the neck, almost brushing against his chin and suggesting the presence of a mask. His words, as usual, were merely tokenistic, and without any concrete plan of action or definite proposals to aid the nation battling as the poor struggles to survive and the economy in the doldrums. Yet the new citizen sits cheering the onscreen presence of the leader who addresses the new Indian citizen, who is comfortably straddled on chairs, flailing their limbs, eating snacks and watching with pride as the leader speaks to them, and fills the room with promises gift-wrapped in the mythical tales of a golden age of the Hindu land. How has this new Indian citizen evolved in the age of the pandemic?

The new India constantly reminds its citizens of their duties and responsibilities. Earlier it was all about being patriotic, standing erect while the national anthem was played before films began in theatres. I had the misfortune to attend a film workshop which lasted for twenty days, two films every day and patriotism bloomed in me and my fellow participants every single day. It was about observing certain days, being loyal to the words of the leader, being proud of the soldiers and, of course, strictly observing the rituals of the Hindu nationalist agenda set by his Bharatiya Janata Party (BJP) with the aim of moulding the new Indian citizen. Hashtags and online propaganda machines worked incessantly, churning out directives for the country’s subjects.

As we face the crisis of the pandemic the new citizen has found her identity. Facing the pandemic, the citizen has new responsibilities, new rituals to faithfully adhere to, in order to display solidarity and a sense of unity. It is interesting, delightful to critics who rush to create memes and trolls. Yet the tasks and the level of participation reveal the increasing popularity of the leader. While banging of plates, the first task was ridiculed by many, especially in my state, Kerala, the second task was widely well-received, even in Kerala, usually apprehensive about such rituals. The candlelight vigil was believed to be akin to the ones we normally do as a sign of remembrance, or protest. The new Indian citizen has definitely evolved and has replaced older versions of the critical and judgmental types, the ones celebrated by people like cartoonist Sankar. Political discussions have given way to affective politics and melodrama of the highest order.

The new Indian prefers to blame the population for the problems this country faces. Reservation policies are considered redundant and she believes wholeheartedly that meritocracy will create a brighter future for its people.  Being apolitical is fashionable and prefers to ignore the threats to democracy from various quarters. For them, elections, being a voter, defines the whole complex process involved in a democracy.

For the new Indian, the politics of Othering is naturalised and, hence, she fails to see the structural violence destroying the lives of millions in this country. They fail to perceive the reality that Othering will create a criminal society, violence and crime thrives in a world of inequality. Misgovernance is cleverly concealed by foregrounding the deep-seated discord and mistrust the majority Hindu community holds for other religious communities like the Muslim community. Politics of hate is probably the deadliest weapon employed in the process of building the new Indian identity.

The new Indian comprehends the nation as a territory and forgets to include its people, as in the case of Kashmir and the abrogation of Article 370. The new Indian rejoiced while the valley faced unimaginable misery and oppression. The process of alienation of one’s own people has failed to generate sympathy or anger among the new citizens of the nation. Citizenship is no longer merely about the conditions enshrined in the Constitution, it is also about several other criteria, class and caste and religion playing a significant role as informal centres of power in defining and affirming the norms of citizenship. This has resulted in attempts at dehumanizing of Others, stripping them of their status as citizens and shoving them away, their miserable existence as nonentities no longer in the popular memory.

The new Indian is definitely a desensitised and apathetic being, who, after the tragedy that led to the death of migrant labourers on the railway track, kept asking, “why did the migrant labourers walk on the railway tracks?” The apathy of the governments towards the poorer classes without wages and facing a future of hopelessness and despair is a reflection of the sensibility of the new Indian citizen who would rather blame the population for the ills in this country than demand answers from the government. The new Indian citizen has turned a blind eye to the reality of class inequality in India and the widespread repressive measures the BJP government has been adopting since 2014, which made this poor labouring class a completely silenced one. Their visibility is minimal, except in the face of tragedies when they are remembered as spectacles of violence and these affective moments are subsequently shared repeatedly by the social media. Will this Indian become the new norm in this nation?